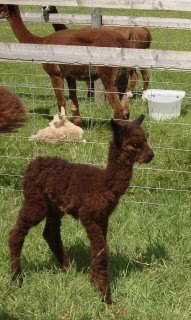 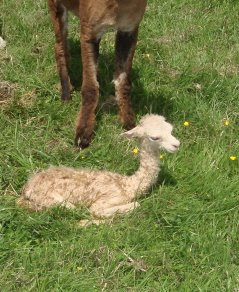 We had just sat down for a cup of tea yesterday when Pam noticed something moving in the paddock by the house. We soon realised it was a pair of ears wiggling around.
Citrine had give birth at least a fortnight if not a month early.
The cria was a baby girl but she was obviously not really ready to be born. She was soon up and about, however, and was suckling quite quickly.
After three hours Citrine had not ejected the placenta so I administered an injection of Oxytocin which is often used to bring down the mother's milk when necessary. It also has the effect of increasing contractions. I hoped that this would work, but was prepared to give her another injection an hour later, but luckily it had worked and everything seemed normal again.
Just after Lavinia, as we named her, was born, Hermione, a young maiden alpaca, started to give birth as well. I thought I was going to have to help her because there seemed to be very little progress, but just when I was giving up on her, out popped the cria. Another little girl. The first by Don Pedro, our lovely brown stud male. She is absolutely gorgeous, with a deep brown very soft and curley fleece. She is petite and very pretty, but the pregnancy was full term and she too began to feed quite quickly. Whe has been named Lucetta.
This evening it rained quite hard but we decided that the cria would be OK in the field shelter should their mothers have enough sense to use them. After dinner, however, I looked into the paddock to check on them and noticed that Lavinia was looking a bit shivery and was lying down in the very wet grass not seeming very active.
We rushed around and put all the four mothers and babies in the barn with the heat lamp on - mainly for the benefit of Lavinia. I rubbed the two new ones vigorously with a towel and gave them a couple of shots of Vita Wise booster which is a high energy and colostrum paste which we give to youngsters we feel need a little extra perking up.
Almost immediately the sun came out. We decided to keep them in any way because you never know what the weather will do over night, whatever the forecast. Tomorrow is supposed to be nice and sunny.
Mike and Nick, our friendly shepherd and adviser, spent all morning in the bottom paddocks. Nick is coming for half a day every week to help Mike keep the farm in good shape. They have reclaimed quite a big area from bramble and other unwanted plants which will add about an acre of grazing. They have also been copicing and lopping the trees down there to help the land to drain as it is very wet. I think they both enjoy the work and each other's company. I take down a flask of tea at tea break. I feel like the old fashioned farmer's wife taking the vitals out to the harvest workers. The dogs get an extra run, as of course, they feel that they need to come too.
Posted by Geraldine at Wednesday, June 17, 2009