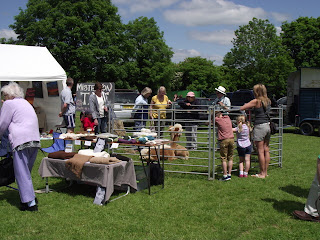 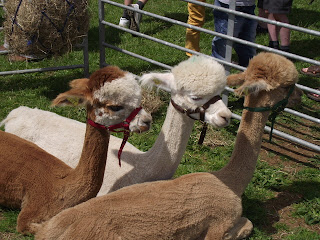 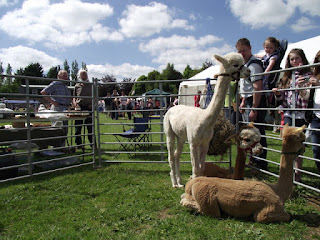 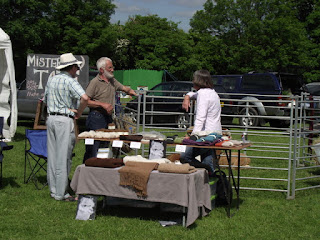 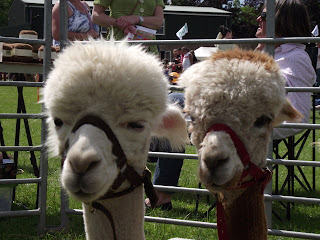 They were a popular attraction as always and we were very lucky with the weather.
Posted by Geraldine at Friday, June 21, 2013 No comments:

A day in the life of the ageing population

Well we keep hearing about it, so might as well admit to it!!

Woke up at 6  a.m. this morning as Mike was going to do his monthly day at the garage in Wilton.  We always have tea in bed in the morning, being aged, and it was my turn.  Unfortunately, without going into too much detail, one of the dogs had created some clearing up issues, but eventually I delivered the tea and our day commenced.   Breakfast was fast tracked to make up for lost time.

Mike took a trailer load down to the dung heap as two friends/neighbours come round on Thursdays to help us clear the paddocks.  He then filled the ride on mower with petrol as I had rashly said that I might mow one of the paddocks as we are over run with buttercups.

I fed the dogs and he and his trusty hound set off, after wasting still more time trying to find Mike's mobile phone.  I walked around with mine ringing his but to no avail.   After he had left, I realised that I had not tried upstairs, apart from looking on his bedside cupboard.   I selected his number again and his dressing gown started to ring, so mystery solved.  I rang Chris at the garage and asked him to tell his Dad the good news when he arrived.

Whilst he is there he is going to try and find something to make a ramp as we have to provide access for disabled people to the house.   The silly part is that once the building has been passed, we can remove the ramp!!  Obviously we will keep it just in case we need it, but it will not be kept permanently at the front door.   More likely to cause an accident I should have thought as an icy ramp in the winter could be quite dangerous.

I had done two loads of washing, fed the chickens and collected the egger, done  a bit of housework and started to re-organise the storage space next to our bedroom by the time our friends arrived.  They come on Thursdays to help us clear the paddocks and thus help with parasite control.  Gut worms to you!!

After two hours "poo picking" , we had a tea break and an enjoyable chat before  Pam and Tony went home.

I spent about forty minutes halter training three of the yearling males as we are going to a fete with them on Sunday.  When they were in the barn in the winter I tried to handle them from time to time to get them used to it, and it has paid off because they are starting to walk quite nicely after only three short training sessions.

A quick snack and another friend, Jill, arrived for her twice a week agility training session.  She used to come for an hour but we decided that it was better for her dog to come twice for half an hour as he is young and like many youngsters starts to get brain overload after a while.  He is coming on really well and is ready to compete now.

After she had gone I did a little training with my dog, Romie, as she is the stooge when Jill comes so that her dog gets used to other dogs being around when he is doing agility.

I am still tingling from a bumpy hour on the mower, but pleased that at least one paddock is more or less buttercup free and at least they won't all re-seed.   Buttercup flowers can cause soreness and ulcers in alpacas mouths.  We had our own Red Arrows formation going.  Me on the mower and four of the dogs chasing around and criss crossing the field.

A quick top up with water for the alpacas, goats and chickens,  watered the containers round the house and up in the top paddock where the shop is now and after bringing in the washing and making a start on the dinner, thought I would update the blog!!  I was going to take a photo of the buttercups and the mowed meadow, but the camera seems to have run out of battery.
Posted by Geraldine at Thursday, June 06, 2013 No comments: