Sadly Number 7 died last Thursday.  She had been looking listless again and we tried all the usual things to get her to rally as she was wont to do.   This time it did not work and on Wednesday  I noticed she had a rattle in her chest which I thought might be pneumonia so I gave her some anti-biotic but the next morning (Thursday) Tony found her dead in the goathouse, so I never got round to giving her the next dose.

JJ, the vet who saw her on one occasion when she was failing, had said he would be interested in doing a post mortem as he had not been able to find a reason for her condition.  I took her along and when he phoned later he said that there was no  unusual reason for her demise.   She did have pneumonia and her heart was slightly small on one side.    It seems that it was just her poor start in life which set the scene.  Hind sight I think she must have been feeling low for a long time.   When she was a kid and she saw me coming with the bottle she used to run to me in a very excited and happy way, but that has been missing for a long time.  Perhaps it was unkind to keep her going so long.  I hope not.
Posted by Geraldine at Tuesday, January 24, 2012 No comments: 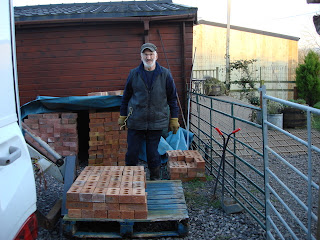 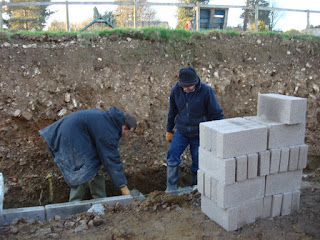 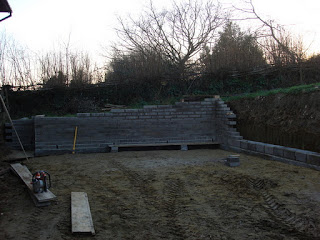 Well, the retaining wall is progressing quite well, although rain has stopped play a couple of times.   The main wall is in blockwork but we are having brick piers by the steps up to the field.   We are waiting for the new barn to have its floor concreted so that the builders can start on our house as soon as the garden wall is finished.   All the necessary paper work has gone in to the Building Regulations Department of the Council and we are hoping that everything will go fairly smoothly once it gets going. 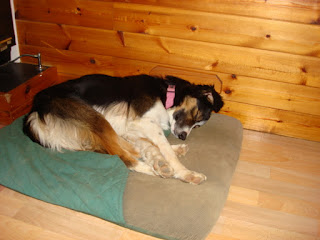 Dolly is being a great help in bringing up the alpacas and putting the goats to bed.  It saves having to interrupt Mike every time I need a hand and it makes Dolly sleep well!! 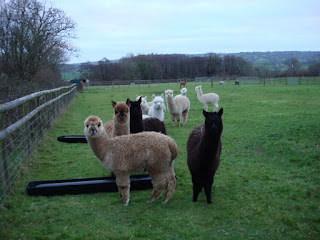 We are really pleased with the quality of this years' weanlings, although it is a shame that they are mostly boys as we needed some girls to replace the stock we have sold.  Mike and I dosed the whole herd with a vitamin and mineral drench yesterday to keep them healthy during the winter when the grass is poor and there is no sunlight.   They are now due for their annual vaccinations which we will carry out as soon as the vaccine arrives.
Posted by Geraldine at Wednesday, January 18, 2012 No comments:

Still very busy and muddy here.   The builders have finished digging out the footings for the retaining wall to keep the earth back behind the house and will start the concrete  foundations so that Larry can start building the wall tomorrow.

If we leave the premises by vehicle in the daytime it  entails driving into a paddock where the fence has been taken down and then through the muddy gateway with the four wheel drive engaged and so on to the drive.  This is to avoid diggers, the dumper truck, piles of building blocks, bags of sand and sacks of cement.

We scanned an alpaca who has been sold to ensure that she is pregnant and thought it would be a good idea to scan the does as well.  I did not think they looked very pregnant but the scan showed that in fact all five of the original does, who are the only ones old enough to breed from at present, seem to be pregnant.   Our scanner is not state of the art (or maybe it is my  lack of technique) so I was not able to be sure whether twins were present, although  I suspect that at least two might have extra passengers.  The old girl who has lost all her teeth, causing Nick to recommend a visit to the knackers, seems to be pregnant too, so maybe she will go to term and once again contribute to the herd.   I hope she can feed a kid but if not I am sure we will manage.
Posted by Geraldine at Monday, January 09, 2012 No comments:

At last a couple of dry days.   The builders have been able to progress with the retaining wall behind the barn we are converting.   The building regulations application has gone in so as soon as we can get the new barn finished we can start on the house.

Mike has been driving our little digger so I have been taking the haylage round, and feeding all the animals first thing in the mornings, so that he can get on.  I must admit it beats housework and I don't think anyone has even noticed the lack of hoovering and dusting.  I just love it when the goats come galloping up when I go into their paddock, or if they have been shut in because of bad weather, they come rushing out of their house.  I know it is only cupboard love, but who cares.   The weanlings are fed when they are in the barn so when they see me walking down the race with a bucket they get very excited too.

I am trying to be good and get to grips with halter training the weanlings.   Three of them are pretty much there - only seven to go.  Luckily I started with the oldest, because we sold two alpacas this morning, one of which was a handsome dark fawn weanling who is walking quite nicely on his lead rein.

Seven, the poorly kid, seems to be holding her own,but she and another doe have been scouring so we gave all the goats a dose of Vecoxan in case they are harbouring coccidia,which is a common problem in angora goats.

Dodger, the visiting dog is part of the pack now and just as good and naughty as the others.
Posted by Geraldine at Sunday, January 08, 2012 No comments:

Well, the start of 2012 has brought a visiting dog.  We are looking after Dolly's brother for a few weeks.  He seems to have fitted in with our pack quite quickly and is best friends with Charlie.

Larry, our builder (and neighbour) was hoping to start on the retaining wall for the sunken garden- the area left when they excavated earth to form a level pad for the new barn - today, but like most of the country we were visited by extremely high winds and heavy rain.  The male adult alpacas were hardly seen all day as they chilled out in their shelter, the weanlings stayed an extra night in the barn.  We have been bringing them in for a few nights a week to get them used to being handled and start halter training.    The females were quite brave and continued eating despite most of the weather, although even they were seen running for cover at times.

The bucks, like the alpaca boys, did not venture out for most of the day and we shut the does in because we were worried that little Seven might get wet and chilled.  As she seems to be gaining weight and making progress we did not want to risk her getting caught in one of the awful storms.

Nick came in as usual but was only able to give Mike a hand taking the haylage round before leaving us his December bill and driving home to a dry and warm environment.   I was hoping to do some husbandry with Nick's help but handling soaking wet alpacas in the pouring rain is not an option however keen you are!!  When we have the new barn up and running we will be able to get the animals under cover the day before and keep them dry if we know it is going to be wet on Nick's day.  No skiving off to the woodburner then!!

Another neighbour visited us this afternoon.   He has offered to help us remove the laurel hedge and is itching to get going with his chain saw!!

The dumper arrived, but due to the weather we have already wasted one day of the week's hire, so we are keeping our fingers crossed that Larry and his trusty aide will be able to start work tomorrow.
Posted by Geraldine at Tuesday, January 03, 2012 No comments: