Sadly the lovely Tilly Tonkers was euthenased today.
Posted by Geraldine at Wednesday, April 29, 2009 No comments: 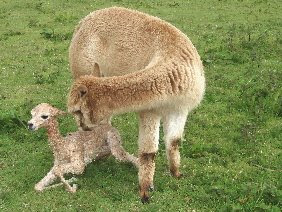 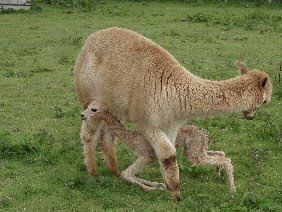 The new baby (no name yet) has been caught chasing chickens. Apparently she is training to be a stock guarding alpaca!! We believe in starting them young at Laurel Farm.

We are having quite a few enquiries about our sale on Saturday, so we are hoping the weather will be kind to us.

All but two of our should-be-pregnant females are spitting off. This means that they are rejecting the attentions of a male alpaca - so they think they are pregnant, which is good news as sometimes they do not carry their cria through the winter. Literally they spit at the male to tell him to go away, although some also kick and run away with their ears laid back. Lucky humans don't behave that way!!

The two who are not spitting off were mated late in the year and may not have been pregnant in the first place as we do not repeat matings too late because we do not want babies born in the winter months as they are at much greater risk and if they have to be kept inside they are more work too.

We heard screaming in the lower paddock yesterday and a quick visual check told us that Alario, a male that we had to separate from the other males because he bullied them had somehow got in with the other males and was chasing Pedro and they were fighting every time he stopped running. I ran down the race and opened the gate to chase the males out to give us a chance to separate Alario and Pedro. Luckily Pedro and the others were ahead of Alario and I managed to shut the gate just in time. I put the boys in another paddock and chased Alario up the race where Mike steered him into a small paddock where he usually lives on his own. Luckily there was no damage done. I checked the area and it looks as though Alario must have jumped over a fence where the top wire was a little slack. He must have really wanted to get at Pedro. Perhaps there is some jealousy because it is springtime and they are both looking for lerve.
Posted by Geraldine at Sunday, April 26, 2009 No comments: 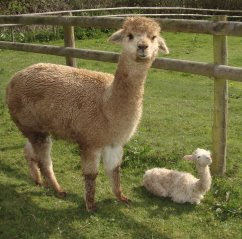 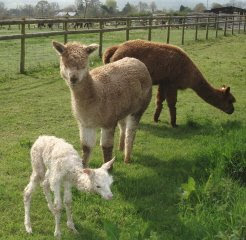 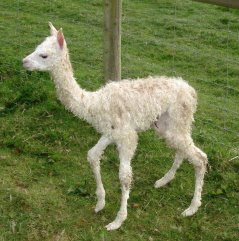 Mike phoned me on my mobile this morning about half an hour after I left home.   Claribel had given birth to a lovely white female cria.   We had both left the farm and gone  in different directions with about ten minutes between our departures.    Mike returned home to find Mother and baby doing well with the cria already standing and tottering about.   He took over and did all the usual checks.   She was suckling by noon and seems to be doing fine (always a certain amount of finger crossing at this stage).
Moonstone, who should have given birth long before Claribel is just looking huge but showing no inclination to deliver her cria.   Perhaps she will be encouraged by Claribel's success.
Posted by Geraldine at Wednesday, April 22, 2009 No comments:

The day after the mouse incident the dogs put up a rabbit on our morning walk round the farm and all of them, including the old girls, chased the poor thing around the field. I did not bother to shout as it was obvious that they were acting as a pack and because I was a bit slow in reacting they were already in full pursuit when I realised what was going on.

I had made up my mind that if they did kill it I would take it back to the house and it would either be the dogs' dinner or ours, but at the last moment it found a way through the fence and disappeared. I hope it recovered but I have a feeling that it might have been too traumatised to survive. Still no major incidents since then.

We have four females who are either about to give birth or should already have done so but although one of them looks fit to bust there is no sign of any action.

When I was at the SWAG Alpaca Show in Bristol I bought an alpaca Easy Pen which is a very simple but effective crush for alpacas. It works with a gate and makes it really easy to deal with an alpaca without it being a two handed job. I did not have room to bring it home and so collected it from the nearby alpaca farm where they are made last week. Mike put it up in the barn and we immediately used it to condition check the whole herd. It was a very quick and easy way to operate.

We have brought the whole herd up into the top paddocks now and so we are surrounded by alpacas which looks lovely against the background of the beautiful hills and Devon countryside.
Posted by Geraldine at Monday, April 20, 2009 No comments:

Well we wanted the kittens to keep rats and mice down, but now that Polly has killed her first mouse, I am not so sure. I was clipping topnots in the catch pen when Mike told me she had got a mouse. She killed it and then kept playing with it to try and make it run around again I think.

We are now starting the 2009 matings and spitting off the females that were pregnant at the end of last year to make sure they have kept their babies through the winter. The boys have a hard time at this time of year because they get spat at and kicked a lot and only occasionally have the reward of a bit of "romance".

We have bought a new pen to hold a single alpaca to make husbandry easier. I am hoping that this will mean that I can do most tasks on my own so that Mike can get on with other things.

We went away for Easter (to a dog show, of course) and David and family looked after the farm. They had a lovely time too as the weather was very good for all of us. He also drenched the alpacas to prevent fluke worms which are one of the biggest killers of alpacas, they say.

We went to Beer today which is a delightful seaside village/town near us. We had a lovely lunch of freshly caught fish and had a table overlooking the sea. Not much work has been done today!!
Posted by Geraldine at Wednesday, April 15, 2009 No comments:

Putting the clocks forward has made a huge difference, but we tend to forget how late it is in the evenings and find ourselves still outside when we should be indoors having dinner and putting our feet up.

I have my alarm set at 4.30 p.m. to give Tilly her heart tablet and again at 7.30 p.m. to remind me to shut the chickens up. It was easy in the winter because as soon as it started to get dark it reminded me. I think I'll soon have to set the alarm to remind me to go indoors and get dinner ready.

Mike has made a rustic trough to go outside the front of the chalet and I am looking forward to buying some impressive plants to go in it. Everything is starting to grow really fast - the grass in the paddocks - hooray - and the grass in the garden - not so good.

I am taking a selection of our alpacas to the first show of the season this weekend so Mike has been doing some last minute jobs on the trailer. I have not towed since last year and reversing is not my best subject so I am hoping to have a practice tomorrow. The weather forecast is good for tomorrow and Friday so the alpacas should be OK to be left out in the paddocks. It is bad news to take them to a show wet because it spoils the fleece and they are unlikely to dry properly before being judged.
Posted by Geraldine at Wednesday, April 01, 2009 No comments: