Snow, ice, frozen drinking troughs, just the job!! I made an unforced error and decided to break the really thick ice which had formed in the drinking troughs with only my rubber gloves on.  It was not too bad at first but very quickly my hands felt as though they were really freezing.  When I got indoors my fingers were white at the ends graduating through various shades to purple and red.  The really good bit is that we will have to do the whole thing over again tomorrow morning.  I think I'll wear ordinary gloves next time.

It was Dolly's first experience of snow and she loved dashing around in it like a hooligan.

The   alpacas,goats and chickens take it all in their  stride and why not they get food delivered so they do not have to worry when the grass is covered over or stiff with frost and some muggins makes sure they have drinks all day.

We see a lot more of the cat when the weather is cold or wet.  In the summer she sometimes disappears for days at a time.  Now she quite often turns up at a door or window demanding to be let in immediately and then expects to take over the best chair or dog bed whilst being waited on  with milk or dinner and lies on her back expecting to have her tummy tickled.
Posted by Geraldine at Sunday, November 28, 2010 No comments:

Mike had to go to the hospital this morning for a check on his heart so Nick and I got on with all the animal tasks.   We finished  condition checking the herd and found that the Chardstock 6 and our boys are in just as good condition as the girls.  The only exception really was poor old Bono who seems to be fairly well now but is still very thin.   As a precaution we gave him a wormer.

We checked the weanlings and they are all as fat as butter so it seems that they have not suffered from leaving their Mums so far.   Cordelia, our lovely brown female, is still quite distressed about losing her cria but the other mums have just got on with their lives.

We have lost three chickens over the last few days.  One had a prolapse presumably due to laying over large eggs, one just died but it was one of the ones we rescued from an intensive "free range" farm so it was probably programmed for a shorter life.   The third must have been locked out of the henhouse when the automatic pop holes shut and seems like a fox or other preditor got her.

One of the kids was limping yesterday and when I checked her front fore I found she had a big lump of dried mud between her toe but also her hooves needed trimming so I  got Mike to sharpen up the toe nail clippers and Nick and I trimmed  all of the kids' hooves. I need to register them with the Angora Goat society before the end of December.   We have the prefix for the herd of Laurels, like the alpacas, and I am trying to think of a theme to use.   The older goats are all named after places apart from Drake the buck.  Nick suggested trees, but Laurels Oak for example does not sound very romantic.  Maybe birds? They will all be girls names as until we have an entire male (as opposed to a gelding) we will not be registering males.

Mike and Nick have nearly completed a shelter for Alario, who sadly spent all last winter in a paddock with out shelter as he is the one who fights the other males.   He now has three pregnant female companions and little house.  The shelter is "temporary" because it is actually just screwed to the fence and the fence forms most of the structure.   Mike  brought some roofing panels from the garage and used them to fill in the sides and  back and because it is so well weathered it looks just like the wooden shelters from a distance and cost about a tenth of the price.
Posted by Geraldine at Tuesday, November 23, 2010 No comments: 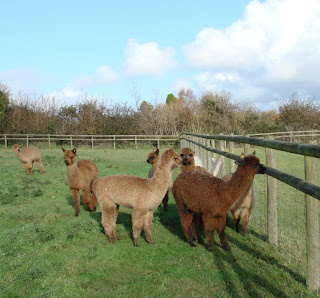 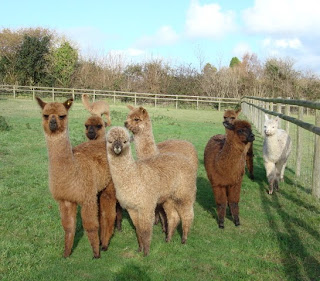 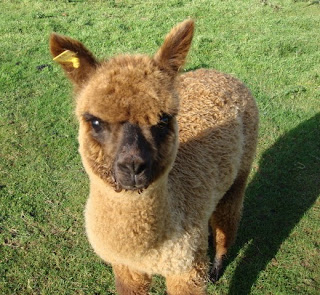 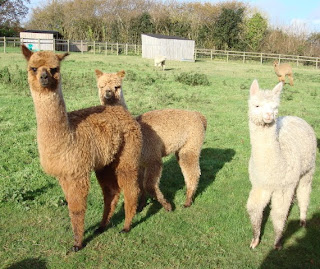 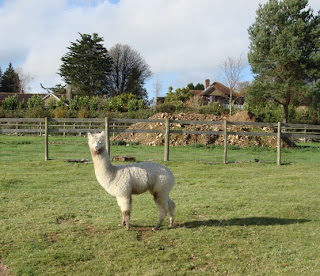 Posted by Geraldine at Saturday, November 20, 2010 No comments:

Today we separated the cria from their dams.   It has to be done but it is always a bit sad.  As soon as they have had time to get used to their new status I will get them halter trained.  It is quite nice having them in the home paddocks and visitors, especially the children like to see them.

The whole place is a mud bath at the moment and every time it starts to dry up a bit the rains come down.

Mike found one of the chicks dead in its run a few days ago.  He thinks the rain blew in and its mother was not protecting it very well.  The fox got a chicken last night.   We think it was shut out when the automatic
pop hole closed.

We condition checked all the females today and were pleasantly surprised that all except one are in excellent condition.  She should start to improve now that her cria has moved out.   As a precaution we gave her a dose of wormer, but I doubt if she has that problem.

The goats and kids continue to do well, as do the dogs and the cat who has decided to become an indoor cat now that the winter is on the way.
Posted by Geraldine at Friday, November 19, 2010 No comments:

We have been busy halter training some of the weanlings.   The oldest four are well on the way to being fully trained and we have been quickly getting 2 ready for delivery tomorrow.    They are only just old enough to go really so have only been training them for a few days.  They are very easy to catch now and although they need more practice have definitely got the idea of walking nicely on a lead rope, even if they get fed up quite quickly.

With days drawing in it is a rush in the afternoon to make sure that the goats get fed and shut in and that any important jobs are finished early as the darkness seems to come in very quickly.

On Wednesday we were going out and I checked on the broody hen just before leaving.   I noticed a broken shell and when I looked closer there was what appeared to be a dead chick in it.  When I picked it up the chick was absolutely cold and there were no signs of life.   I was just about to throw it in the hedge when I noticed that its mouth moved a little.  I thought it was a lost cause but nevertheless took it indoors and plunged it into warm water.  It revived a little and actually pecked at the water as if trying to drink.   I dried it off and put it in the oven at a low temperature!! I held my hand over it to protect it from direct heat (especially as it is a gas oven) and spent about ten minutes with it.  It was definitely alive but I was not sure if it had been starved of oxygen and what its future might be.

Anyway with very little hope I took him back and his mother took him under her wing and I let nature take its course.   The next day I lifted the hen off expecting to find a dead chick but glory glory there were two noisy little yellow chicks.   One was a little less lively and still seemed to stumble around a lot, but by this morning they are both running around, eating, drinking and cheeping their little heads off!!   I am so glad I did not give up on the semi dead one and hope that it will grow into a nice laying hen.
Posted by Geraldine at Saturday, November 06, 2010 No comments:

We have moved the main herd including the yet to be weaned cria down to the winter paddocks as the grass is still very lush and green down there.   There are some wetlands there so we will have to treat them for liver fluke which is a dangerous parasite which thrives in damp or wet conditions and can kill before the animal even shows any sign of sickness. 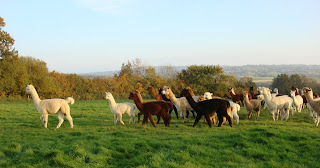 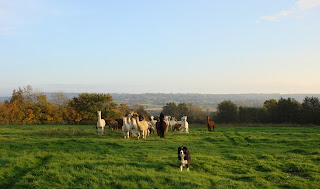 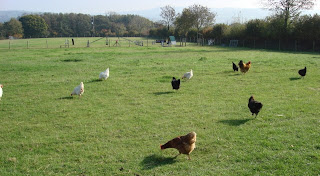 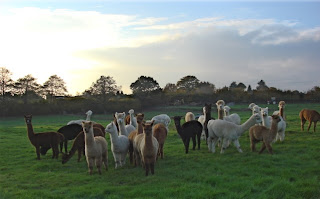 Posted by Geraldine at Monday, November 01, 2010 No comments: