After photographing all the young male alpacas for sale last week, Nick and I trimmed the female alpacas' topknots to make them smarter and took photographs of them for our alpaca sale page as well.  Some of the photos  are below and the rest can be seen on our website. 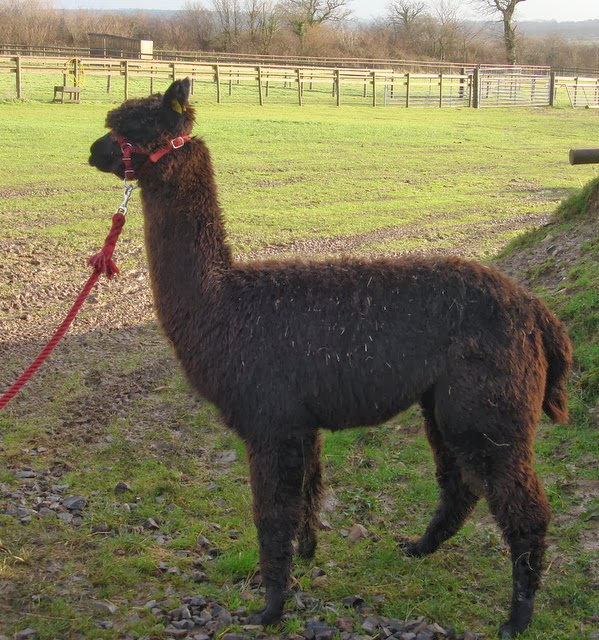 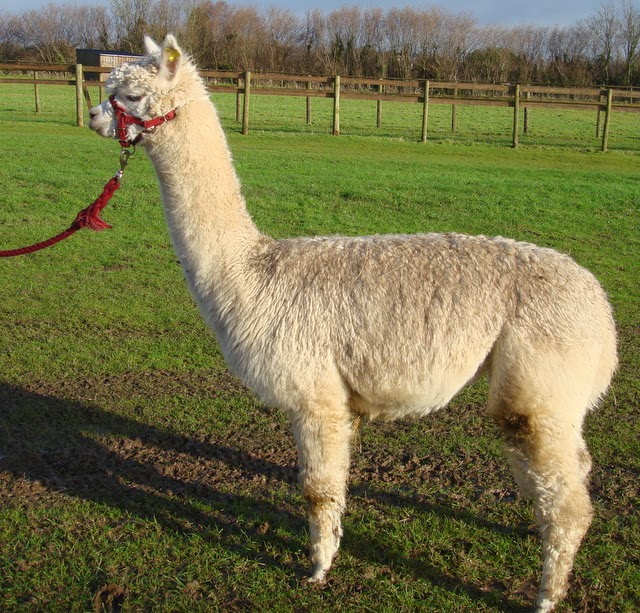 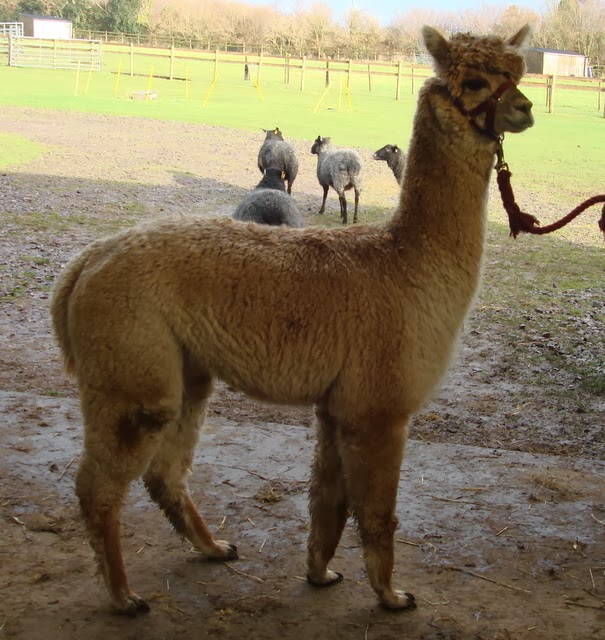 I have spent hours updating our farm shop, having had to overcome some problems which also taught me some useful ways of promoting the online shop.
Posted by Geraldine at Tuesday, January 28, 2014 No comments:

Cria (juvenile alpacas) can often be seen pronking at dawn and dusk.  This usually starts off with one youngster pronking (similar to a canter in a horse) and is quickly joined by one or two and usually then all the youngsters in the herd.  They go at a considerable speed and obviously enjoy themselves.   It is probably to exercise their limbs as much as anything but it looks like really good fun.

I cannot remember seeing adult alpacas doing this.   They gallop if they are running away from trouble or to food but do not pronk!!  Yesterday, however, first the adult females in one field and then the adult and yearling males in the adjoining field decided to have a pronking session!!  It was lovely to see and it is nice to know that even adult livestock have childish impulses.  I can only think that they got the wind (quite blustery) under their tails!!

This afternoon there was a sudden blast of wind which is probably the pre-cursor of the forecast gales and the whole herd galloped up from the bottom of the field and seemed relieved when we ushered them into the barn or their shelter.  Obviously a more serious form of exercise and not for fun either!!
Posted by Geraldine at Saturday, January 25, 2014 No comments:

Hay Ho Hay Ho It's Off to work we go!

We left it as long as possible before ordering more hay and straw for the alpacas in the hope that we could pick a dry day and one when Nick was here to help.  The hay loft is wonderful but high so we have a system between three of us.

Michelle from a neighbouring farm delivered a load of 50 small bales of hay and 10 bales of straw.  She drives a huge tractor and trailer as if it was a mini!!

She threw the bales down and Nick and I piled them on the barn floor.  After Michelle left Nick went up into the hayloft and Mike was below with our tractor.  My job was to load three bales at a time into the tractor bucket for Mike to lift up to Nick in the loft to unload.  It went very smoothly but we were all ready for a break and a cuppa.  The cat took the opportunity to have a cuddle on my lap. 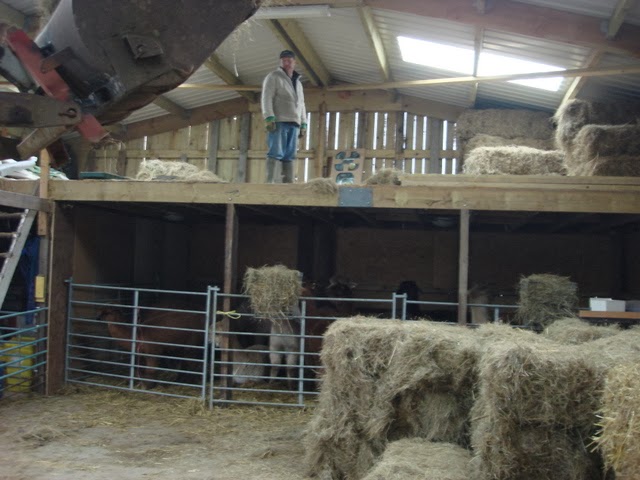 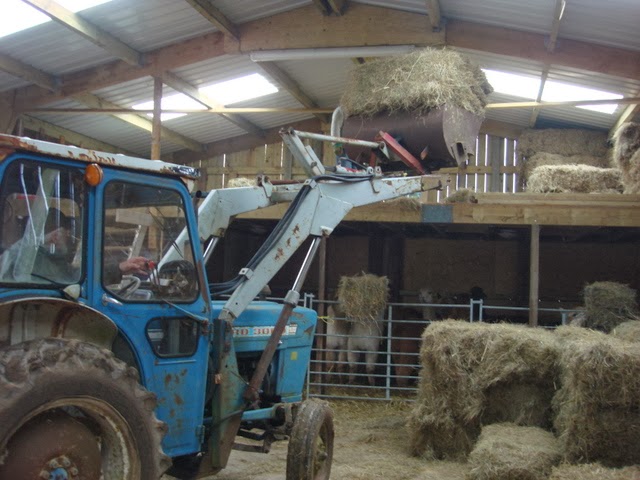 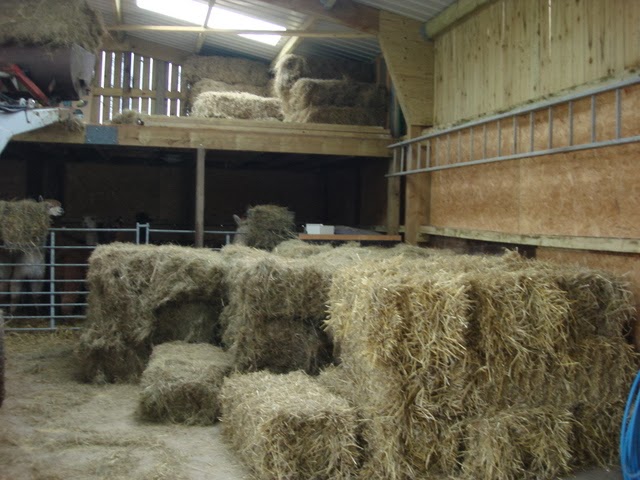 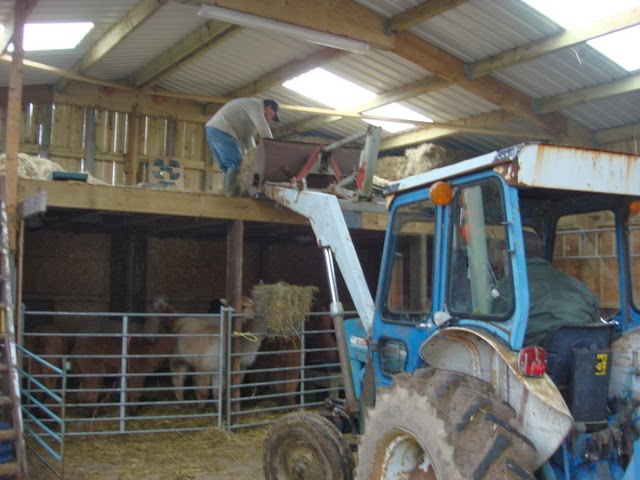 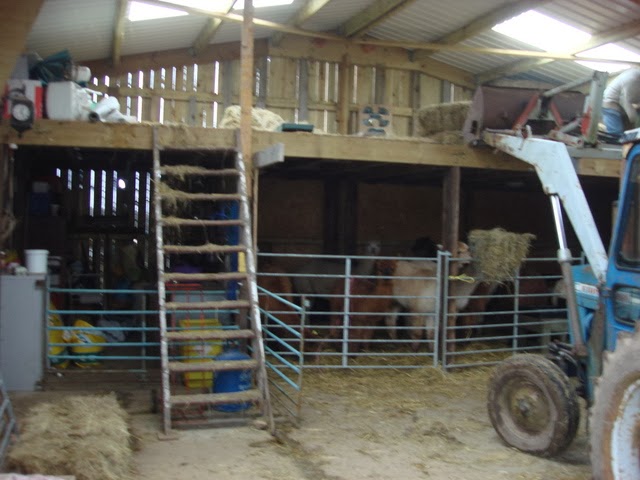 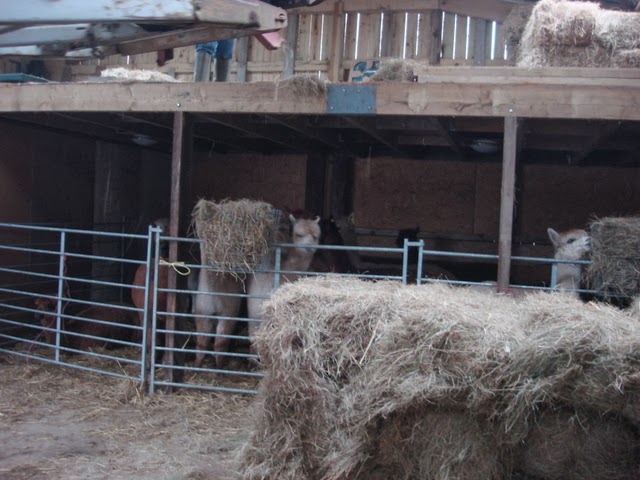 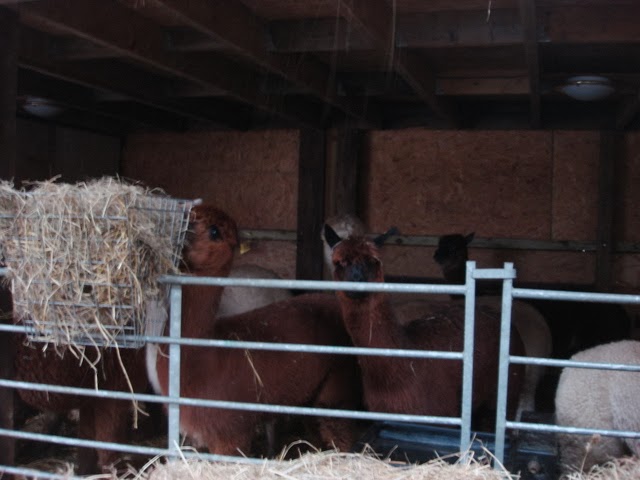 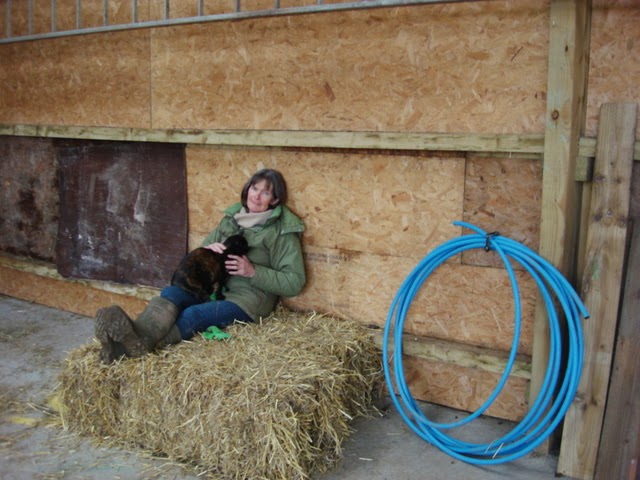 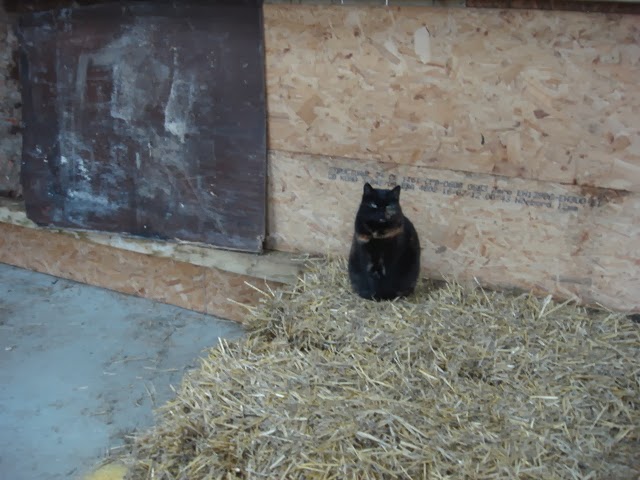 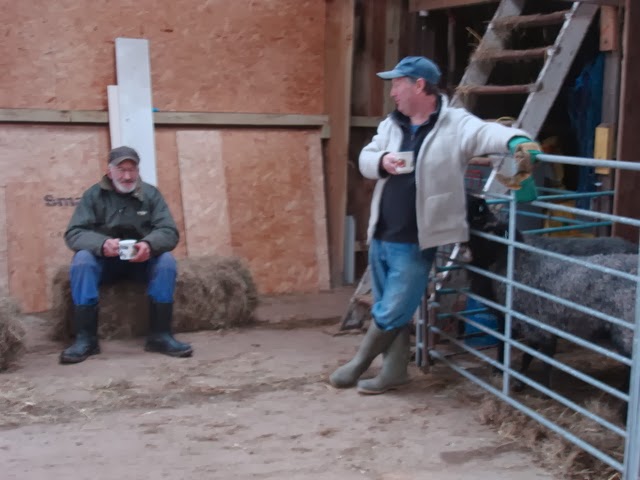 As you can see from the photos, the alpacas just look at it as lunch arriving - it's easy for them!!!
Posted by Geraldine at Friday, January 24, 2014 No comments:

When we first moved on to our 15 acres to farm alpacas it was completely derelict and amongst other things we spent a lot of money on really good stock fencing for our alpacas.   We expected them to last for many years, but this year we are having to demolish a large percentage because they have rotted making them unsafe and/or ineffective.

Our friends, Clive and Elaine, cam to stay for the weekend and put in a lot of work to start the process.  We intend to end up with two fields each split into two so that we can divide males and females.  The small paddocks dividing various classes of alpacas, which we used when our herd was bigger, will disappear. 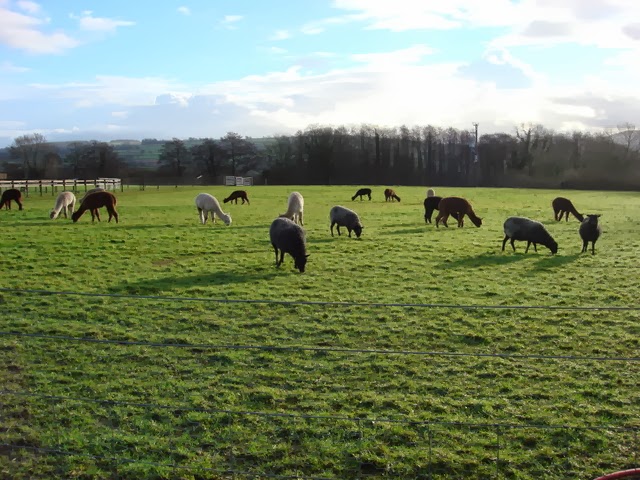 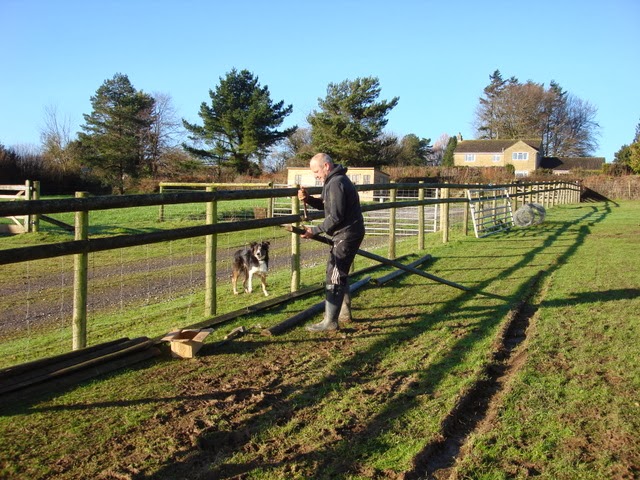 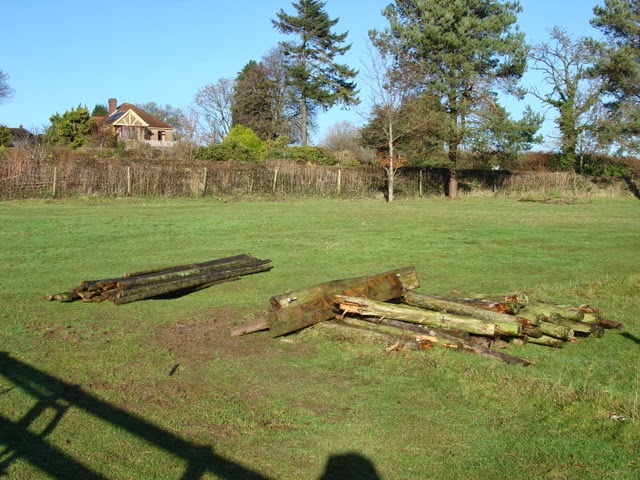 It will actually be easier in some ways and we can always erect a new fence here and there if we find the change is too drastic.

We could not have chosen a worse weekend to start the work but they insisted on carrying on despite the wind and the rain.  The pictures show the female alpacas enjoying more unrestricted grazing and Dolly, the dog, supervising Clive's work.

Time for the alpacas routine vaccinations.   They have been grazing outside during the day for a few hours to give them a chance to stretch their legs and to give us a chance to muck out.  To help prevent infection it is advisable to give any sort of injection when the skin and fleece is dry (unless of course it is an emergency).
With the sudden showers and  heavy downpours it has been difficult to find a time when the alpacas are dry and it is convenient for us to carry out this procedure.

This morning I decided that it could not be left any longer and so instead of releasing the females to graze outside I first caught them one by one in a small enclosure and vaccinated them and our four Gotland ewes.

When we redo the fencing we will be creating permanent handling areas to carry out routine husbandry, so it is quite useful to try out different scenarios with temporary penning in the meantime.  I carried out the vaccinations whilst Mike filled the syringes and kept the gates secure from possible escapees.

Tomorrow we will treat the males and then all the husbandry is up to date for a while.

Room with a view

The place looks strangely deserted in the mornings these days because all the alpacas are kept in over night in their various shelters to protect them from this winter's uncertain and vicious weather.  It is a shame that they missed the beautiful start of the day today but they soon made up for lost time when they finally stepped out at about 9 a.m.

These photos show the dawn view from the balcony in our bedroom and include a recent visitor who sits on the fence for quite a while every morning occasionally pouncing on some poor unsuspecting creature for breakfast.  Unfortunately even with the zoom on my little camera I could not get a really good shot of the buzzard. 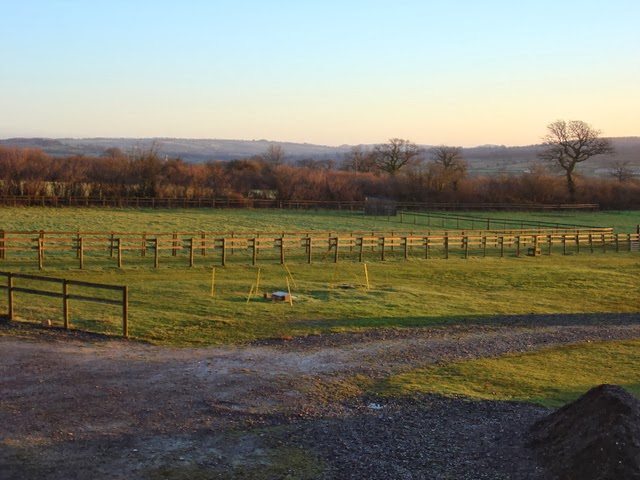 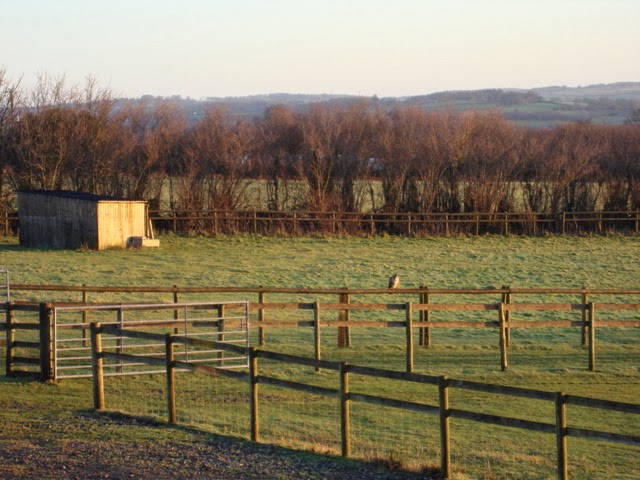 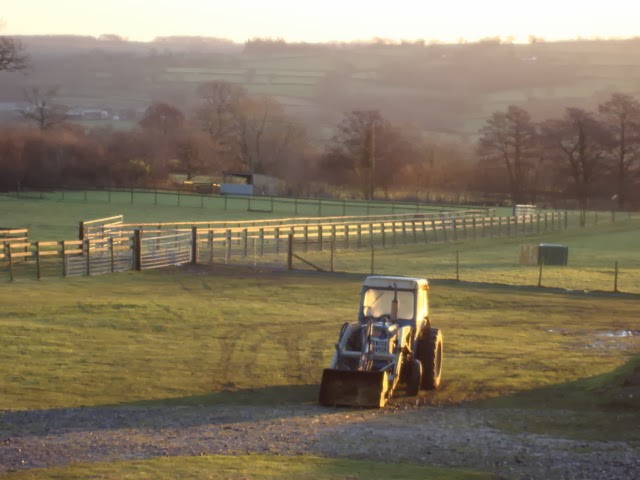 www.alpacas-for-sale.co.uk  www.alpaca-stuff.co.uk
Posted by Geraldine at Saturday, January 11, 2014 No comments:

The problem with the goats' feet made us have a rethink and whilst Mike was having his routine blood test this morning, I introduced the older male alpacas, Anchor, Pedro and Spirit to the yearlings.   They have been sniffing each other over the fence for ages and so when I put them in a paddock together they hardly noticed.

I then moved the goats into their  shelter which I had cleaned up and added lovely dry  clean straw for their comfort.  It was easy to move the goats  up the long race.  I just showed them the bucket of feed and they were putty in my hands.  My only concern was the proximity of their long horns.  Not that they meant me any harm, but they find food extremely exciting!!  I hope a stay in the dry will help their poorly feet to return to normal.   When I looked in a little later they certainly seemed very much at home.   The chickens have not ventured in yet, but I am sure they will eventually.   They will probably use the horns to perch on.

When Mike returned we moved the wheeled  hay rack out of the yearlings' shelter and put up some wall racks to make more room and when the rain came Dolly and I herded them all in.   They were quite keen when they saw the buckets of alf alfa waiting for them and I listened  carefully when I went up to shut the farm gates and there was no noise, so presumably they were all happy together.

This will make it much easier because with the goats housed indoors and only two lots of alpacas instead of three there will be a lot less mileage in the muddy fields.
www.alpacas-for-sale.co.uk
www.alpaca-stuff.co.uk
Posted by Geraldine at Friday, January 10, 2014 No comments:

Well, we are back to normal after a mixed Christmas break.

Mike was rushed to hospital in an ambulance on the 23rd with what turned out to be an irregular heartbeat. He was released back into the wild in the early evening of Christmas Eve and apart from being breathless and tiring easily he is much better and doing bits and pieces around the farm again, although he is still being assessed and may have to have his heart stopped and restarted.  The calender seems to be full of various appointments he has to attend including twice weekly blood tests whilst he is adjusting to warfarin which he needs because his heart problem makes him more susceptible to dvts.

He enjoyed his Christmas dinner but went to bed early leaving me and the family to finish off the day in traditional fashion but without him.

The weather in the West Country has been appalling and we have kept the alpacas in shelters or in the barn for most of the time, letting them out to exercise and get a few rays whenever possible.   They have all learnt to recognise the shake of a bucket and rush to return to their abode whenever summoned thus.  The girls in the barn make a bee-line to get back in as soon as it starts raining.   The four Gotland sheep are in with them and they are worse than the goats for eating, so if I do have a bucket in my hand I have to hang on for dear life and dish out the contents before being mugged.

The chickens are enjoying the alpacas being kept in because it means lots of straw and hay lying around with plenty of seeds for them to scratch around for.   We have to cover up the wheelbarrows if there is any hay on them or it all ends up on the floor, having been thoroughly scrutinised for the slightest tasty morsel 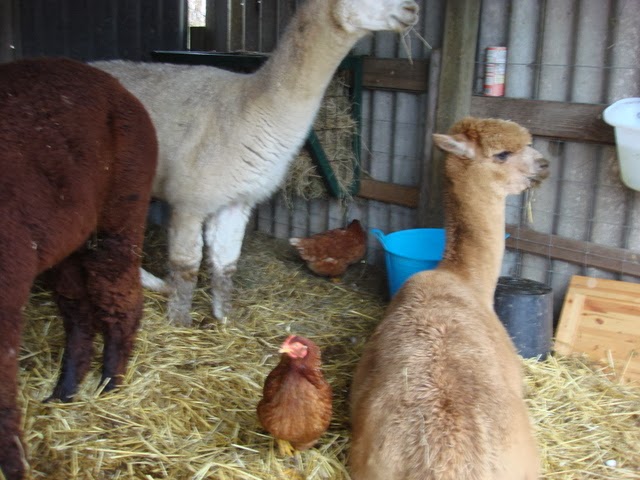 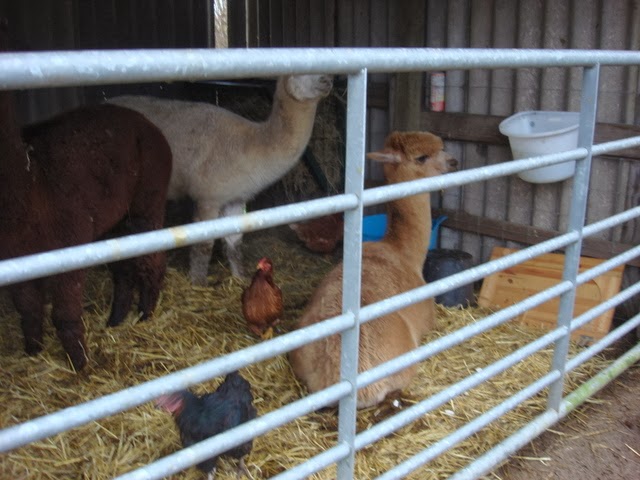 The cat spends most of her time in the hayloft and only ventures down to have her meals or to nip out for the odd mouse or call of nature if the rain and wind have stopped.  She likes to take an overview. 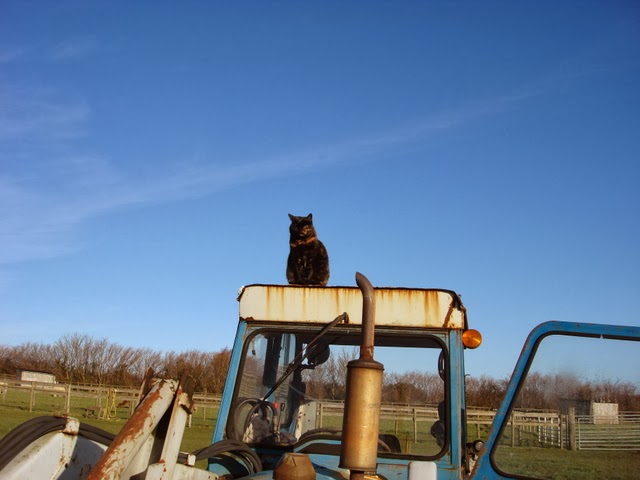 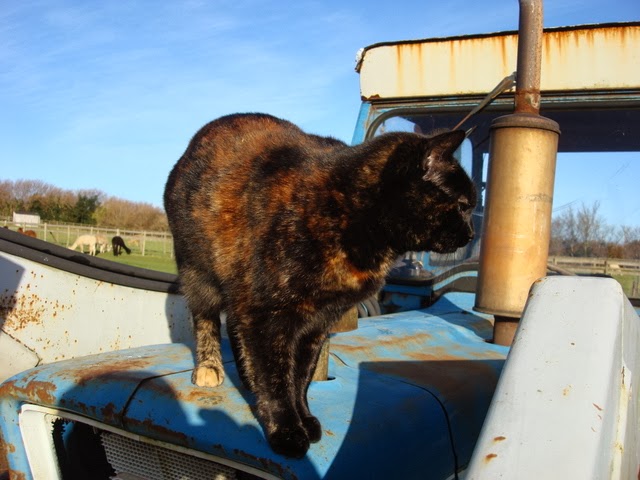 One of the older male alpacas, Anchor, is a very large boy but seems to be getting rather thin.  Obviously hay is not a complete substitute for grass, even with added concentrate feed, but I was rather worried so have dosed him and his two companions with an extra dose of wormer.  The whole herd will be dosed against fluke tomorrow.   Even though they are mainly indoors, we are concerned that they may pick it up when they are out in the wet fields.  Anchor will have a dose too and then there is little we can do except keep an eye on him and make sure he gets plenty to eat.  They are all having regular doses of ADE paste to try and compensate for the lack of sunshine during the winter months.

We only have three goats left, but the two older boys are having real problems with their feet.  I keep trimming them and spraying them with anti-biotic spray but even though they spend quite a lot of time on the dry straw in the their shelter, their feet are wet a lot of the time. Tomorrow we are going to move them to a shelter nearer the house and keep them shut in completely for a week or two to try and help them recover.


Posted by Geraldine at Wednesday, January 08, 2014 No comments: