We have been rushing to beat the March 1st deadline, after which some actions are not allowed on farms, such as cutting hedges.  This is to protect wild life and birds which may be building nests in the hedgerows.   We had gradually been removing the poisonous laurel hedge (which gave the farm its name) so that we can extend the goats' grazing.  Our neighbour has been helping.  Mike finished it off this morning.  Lucky it is a leap year.

We have some swallow boxes which we bought because we are converting a barn and not building a new house.   We have to make provision for the returning swallows in the new barn.  We would have done so anyway, as we like to see them swooping in and out even if they do make a real mess.

Mike has also been clearing ditches in the winter paddocks.   They were becoming nasty stagnant waterways, and were not doing their job.

I have been trying to get our youngest male to take an interest in the females in the hope that he will be working this spring.   I introduced him to an infertile female who usually welcomes the attentions of her suitors but so far has failed to become pregnant.   Unfortunately she rejected him!!  I don't know if she just took a dislike to him or if amazingly, she is finally pregnant.   Better luck next time.

The retaining wall at the back of the house has been completed but we cannot move on until the new barn floor has been laid.   The builders keep promising to come but so only their digger has arrived!!  They are going to give Mike a final fixed date of starting - they say.
Posted by Geraldine at Wednesday, February 29, 2012 No comments:

I meant to take before and after photos of the goats when sheared.   Took the befores, but only took the afters today. Unfortunately the pregnant does in the after shots had just spotted the fresh haylage in their rack and refused to move to face the camera, hence the rather unfortunate look!! 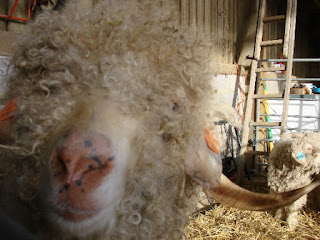 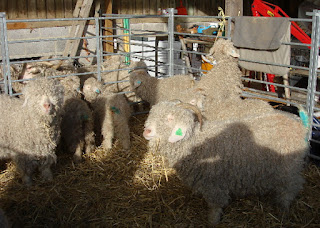 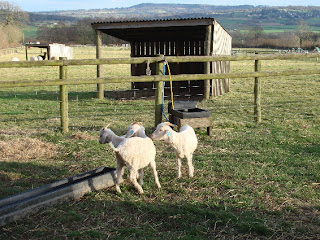 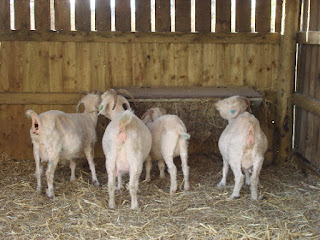 They are coming to put the concrete floor in the new barn on Tuesday - at long last.   We had hoped to have the barn finished in December but have been bugged with bad weather.   The builders got all behind with their other jobs because of it and thus we kept getting our dates deferred.   When that is finally finished we are all set to start on the barn conversion.

We gave all the alpacas a vitamin and mineral drench today  and gave some of  them a hair cut.  They have a "topknot" which in some alpacas can grow too long and cause wool blindness -i.e. they cannot see through their fringe.  It can make them a bit wary as they are taken by surprise easily and can cause eye problems such as runny eyes.

Mike and I thought we should do it today as he has quite a list of non-animal related jobs on his agenda at the moment.

Dolly was brilliant in fetching the alpacas for their treatment.   She is very calm and does not rush them at all- just keeps them moving at a steady pace.  The ones that used to argue with her seem to have resigned themselves to the fact that she must be obeyed.

She also moved the bucks into their shelter for me.    We think Number 1 (our first-born) may have been caught in between the two adult bucks.   After shearing they did not recognise each other and had some fights - now resolved, it seems. Andy (number 1) has been limping very badly ever since.   We thought it was getting better he but seems to be holding it up again.   I have been giving him some gentle massage as I think he might have been butted and had something like a dead leg.   He lets me move it around without bleating- and, trust me, goats bleat for England if they are even slightly hurt!!  Fingers crossed he will gradually get better.

The dogs were very restless earlier this evening which is quite unusual and as we had found a pile of pheasant feathers in the chicken's paddock today we were worried that the fox might be on the prowl again. Mike went down to the chicken shed and confirmed that they had all made it into their house before the automatic pophole closed.   The door is light sensitive and shuts them in at night and lifts to let them out in the morning.
Posted by Geraldine at Saturday, February 25, 2012 No comments:

The does are all due to kid in March so we have decided to bring the old stock box (usually used as a feedstore for the goats) and a disused chicken shed back into use to act as a maternity unit.   They are now both near the house so that I can make checks in the early hours and we can use the electricity from the house to run heat lamps, so that we can give the kids better care.   Last year it was EXTREMELY cold for most of the births causing problems all round.  We just need to decide when they are ready so we can get them bedded down in the kidding maternity wing.

They were all sheared last Tuesday and luckily the weather has been quite mild since then so they have been able to get used to having less coverage.   According to Cedric,the shearer,they double the thickness of their skin within 24 hours to compensate for the loss of fleece.   Does it get thinner again, I wonder?  If not we will end up with very fat goats adding skin layers every six months!!!

The two bucks took a great dislike to each other after shearing - partly  because they did not recognise one another when they had been sheared and partly, we think in hindsight, they spent a couple of hours in the pen next to the females.   We thought this would be OK since the mature ones are all pregnant but of course that young female  kids are also interesting, even though we do not consider them old enough to mate.  Anyway, after some minor fighting injuries and Andy, the whethered kid, limping a lot, we separated the two mature bucks so that they each have a side of the goatshed.  We also sprayed them with vinegar to kill the natural smells which might be stimulating the aggressive behaviour.   As usual, it is a lesson learned and we will know better next year.

The retaining wall at the back of the barn (soon to be house) is all but finished and the steps up to the garden look very elegant.

The chickens are all looking very smart again and we are getting two or three eggs a day now.   Not exactly a mountain, but enough to save up for the occasional omelettes.
Posted by Geraldine at Saturday, February 18, 2012 No comments: 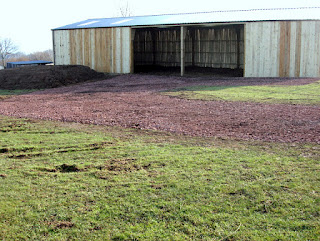 I have resumed halter training the weanlings after a break due to the poor weather and as I had been a bit worried that they were not devouring the haylage and the grass looks very poor, I was pleasantly surprised to find that their condition is actually better than the last time I checked.   Even the youngest who don't seem to join in at the feeding trough seem to be nicely covered.  I love halter training them and feeling that lovely soft silky fleece, which is, after all, what alpacas are all about.
Posted by Geraldine at Thursday, February 09, 2012 No comments:

Winter has really caught up at last.  The builders are having a problem starting in the mornings because the cement is effected by the cold.   They are going to start later tomorrow in the hope that the sun will have taken the worst of the frost away by then.     The retaining wall is looking good but taking quite a while and with a cost we had not really planned for.  I expect there will be a lot of that sort of thing.

We are still waiting for the barn to be concreted but the weather has been against that too.  It has been very wet for since Christmas which has put their schedule back.   The latest eta is the end of this week.

We have ordered wooden hurdles to make some semi- permanent penning in the new barn.  Mike will have to adapt it, but at least it will same him some basic work.   Larry, who is building the retaining wall will also be building a wall in the barn to separate Mike's workshop from the rest of the barn so he can keep the farm machinery in good order even if we have animals in for husbandry etc:

The males all escaped from their paddock just as Larry and Ollie (builders) were leaving.  I was in the office and they shouted up to ask if the alpacas were supposed to be in the yard!!  Luckily I had Dolly in the office with me and the boys took one look at her and jumped back over the temporary fence they had trampled down, and I was able to put it up again.   We will have to move them to another paddock tomorrow I think.
Posted by Geraldine at Wednesday, February 01, 2012 No comments: