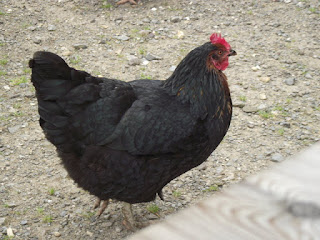 Our hens are still confined to barracks because of Avian flu prevention rules.  Whilst I was cleaning them out today I noticed that one had an old leg ring which had become distorted and was digging into her leg.  I caught her (after a buit of a chase) and managed to remove the ring.  Unfortunately it was badly embedded and had cut into her flesh.

I cleaned the wound and sprayed with a biocide spray and she seemed fine although there was some bleeding.  Ilove my chickens but they can be horrid.   When I went back to check on her, the other hens had been pecking at her and made it bleed quite badly.

She is now in a box with some straw, water and feed and I hope by tomorrow she will be able to return to the flock.

I never use leg rings now but she must be one of the older  birds.

We have moved our small herd of twelve  male alpacas into a paddock behind the house.  They make effective lawn mowers and it saves wasting the grass.   They will be going back into their normal field in a few days when they have done their job.

We have five young males  and they are just being halter trained and we will take the opportunity to bring the adults up to date and remind them how to behave on a halter too. 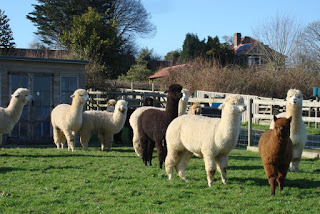 The girls are down in the lower fields at the moment but when they come to term we will bring them up nearer the house to keep an eye on them in the  later stages of their pregnancy and so we can look after them as they give birth.   We are hoping for eight births but will be haoppy whatever the number as they are now mainly pets and lawmowers.

Mike is quite well now that he has got over his heart surgery and some other scary events.  He still has trouble in pacing himself but he is stopping earlier.  Currently he is working on finishing off the domestic areas of the farm such as the front and rear patios and the pathways to the exit.

He is also finding some time to indulge his hobby of classic cars and has made some new friends in a local car club.

Although having fewer alpacas helps to make the work load lighter, many of the fences around the farm have rotted and need replacing, so Mike and Nick (our once a week farm worker) are fully engaged on this project at the moment.  Where possible we are doing away with fences altogether but obviusly there are some areas that defiitely need to be fenced securely.

www.alpaca-stuff.co.uk
Posted by Geraldine at Friday, March 17, 2017 No comments: