Well, it has been a bad summer and now we are having a taste of winter!   Today we have had a north wind driving really damp air and drizzle alternating with rain.

Three of the young does have been sold and moved to their new owners in the village.  They live on a hillside so it should suit them down to the ground.

All the other goats have been brought inside and their health and their feet are much improved.  The two bucks have been fighting a little but we think it is partly because they are enclosed in a small area and also they can probably smell the does and it is "that time of year"  for goats and sheep.   We are not breeding from the older does this year and have sold the younger ones who would have been ready.  We will see how things go next year.

The sheep seem to take everything in their stride and are certainly no trouble so far.

Things are getting exciting in the house now.  The outside has been finished apart from where the porch is going.  Most of the internal walls have been plaster boarded and the plumber and electrician are doing the first fix.   The downstairs floor will be done next week.   The under floor insulation is already down.   I am thinking that we will probably not need any heating at all given all the insulation that has gone into the build so far.   I am worried that there will not be enough air getting in for breathing!!  We have chosen  the sanitary ware for the bathroom and ordered the range cooker.  I need to decide on kitchen units so the electrician and plumber know where to put their wires, sockets and pipes etc:

We revisited the flooring company and have chosen a different stone floor.   It is lighter in colour and turns out to be cheaper too, which is a bonus, although the overall price will be the same as we forgot to include the porch when we asked for the quote originally.

We have started to wean this year's cria and seven females have moved down to the winter paddocks.  This number will increase over time as we wean the rest of the cria.

Just thought you might like to see the Gotland Sheep.   Three of them are very friendly but one is a bit stand offish at the moment but they seem to be settling in very well. 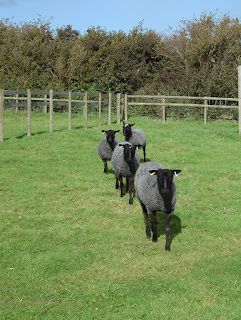 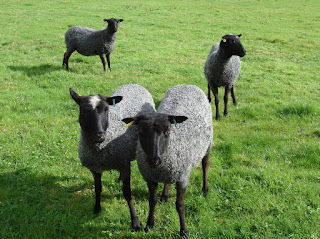 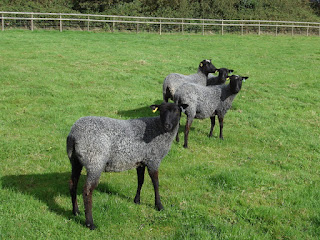 We are loving the new windows in the "house".  From the attic in the barn part there is a fantastic view of the Devon countryside which is even better than the view over our fields. 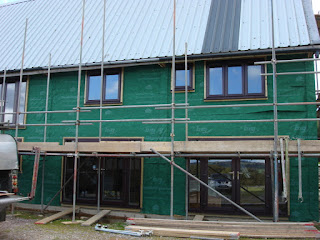 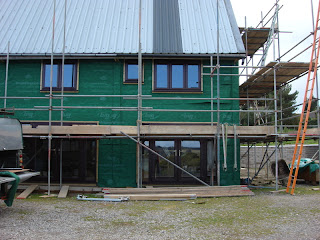 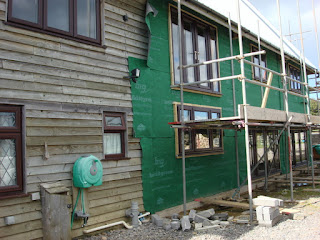 www.alpacas-for-sale.co.ukWe are getting quite a lot of interest in the Christmas Market which is here on the 1st December.   We have  15 stalls booked and we have enough of our own products to sell to take up another 3.  Now it is just a question of the weather and getting enough customers.  Luckily I have been able to hire some tables from the village hall for those exhibitors who cannot bring their own.   It was a bit heart stopping when the person who organises the bookings for the hall told me that it was booked for a party that day.   Luckily they don't need many tables so we can have them!!

www.alpacas-for-sale.co.uk
Looks as though I accidentally saved this post as a draft.  It was dated before the photos of the Gotland Sheep.

Every time I think I will go out with the camera to take photos of the house, or indeed anything of interest, the weather steps in.

The good news is that the house now has a full complement of lovely windows, most of the outside has its wooden cladding on and we are dashing around choosing flooring for the large living room and the porch.

Yesterday we went to collect our new Gotland Sheep from an agility friend who lives near Okehampton.   I had already found a company who sell stone flooring which was on the way - well that is what I call it - Mike is more sceptical and calls it a  big detour - at least that is what he usually says, but this time he agreed that it would kill two birds with one stone and save some fuel.  We were due to collect the sheep at 1 - 1.30 p.m. so only had quite a small window to view the flooring and given the small Devon lanes we had to travel down, that window was even smaller by the time we got there.   We expected the yard to be big (which it was) but most of the space was taken up with stock so we had to park the truck and trailer outside in the lane.

We finally chose Lodge Stone from Egypt, which is apparently a very recent import to this country and at the same time fell in love with their water features which were made of granite and very graceful (this would be for the garden).  They gave us a frightening quote but we decided when we started on the project that we would try and get what we want, even if it means waiting longer.  In this case it cannot wait because the floor is the next thing on the list of building works.

We arrived on time to collect the Sheep but Jenny , my friend, - hope there are no Inbetweener fans reading this -  had had a bad morning so I helped her tag the sheepand she kindly checked and trimmed their toe nails whilst I watched.   They got quite flighty and jumped over the gates of their pen, which was a bit worrying.   Our alpacas never do that and even the goats who can be very naughty only stick their heads through the fence or occasionally get under a gate or through it if it gets left open!!

We are downsizing the goat herd because we have not found a way to make any profit out of them.  I had visions of having the fleece spun and selling breeding stock, like we do the alpacas, but it has not really worked.   We have got our original investment back, and make enough to cover the cost of shearing with a small profit when we sell the fleeces, but I fear that when we feed them through the winter we are definitely out of pocket.

The Gotland sheep have beautiful grey fleece and apparently are good to eat too, so the plan is that the 4 ewe lambs we have bought will be mated this time next year and lambing in the following spring and will provide fleece and meat for friends and family.  We will keep the numbers down so that they are easier to manage.

The chickens are also disappointing at the moment - still only one egg a day and sometimes that goes missing if Millie or Romie get there first.

We have had health problems with all our animals over the past few weeks - worms, bad feet, out of condition Mums and really sodden ground all the time.   It makes everything such hard work and depressing when all the coats are wet, the dogs are constantly muddy and wet, skies are grey.   Still it makes you appreciate the sun when it does come out.  We have brought all the goats inside now in an effort to get their feet in better condition.  Neither of the Big Bucks could walk properly a few days ago.  I cut their nails, dug out the dirt, sprayed them with blue spray and gave them long acting antibiotic and they are at least walking normally now, although their feet still look wierd.
Posted by Geraldine at Thursday, October 11, 2012 No comments: