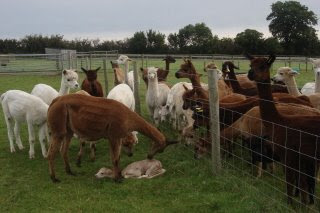 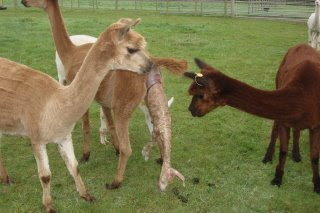 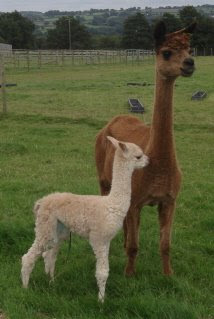 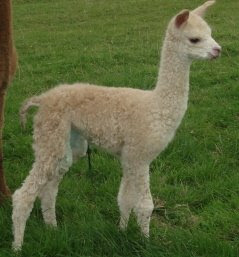 Good news - the weather has been quite pleasant today. No rain (although no sun either) and not too cold.

Just as our neighbour arrived to help us with the paddock cleaning I noticed that Annabel, one of our original alpacas was about to give birth. This was a good excuse to let Mike and Pam start the poo picking without me!!

I wandered down and in a very few minutes the prettiest cria of the year was born!! Annabel is an experienced Mum and took a no nonsense approach. She looked a little cross with me when I picked up her baby to rub her dry and spray her tummy, but otherwise she took it all in her stride. The cria, Laurels Lady Baptista, is a very pretty light fawn - rather the shade of an apricot poodle. She was on her feet in minutes and suckling within the hour. All very reassuring.

We did the last spit offs of the year and luckily only two females failed to reject the male (meaning that they do not think themselves pregnant). Both have been known to mate even though they are pregnant, so we are hoping that is the case this time as we are working towards having all our births in a window between April and July.
Posted by Geraldine at Monday, September 08, 2008 No comments: 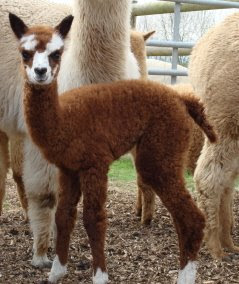 We promised last year to take our alpacas to the street fayre but could not because of the F & M movement restrictions. This year we took 5 of our female yearlings - Emilia, Cleopatra, Nina, Dorcus and Helena.

The organisers had a bit of a nightmare coping with flooded fields. The main events field was not useable and the car parking field had to be changed and a flock of sheep removed so the cars could be parked. Some of the events had to be cancelled or moved and because the Chain Saw juggler was being moved into Strongs Field where we were supposed to go, we were relocated to the verge outside the post office. Ray Smith, one of the organisers, thought the alpacas might be worried by the chain saws - if they weren't I sure would be!!

Congratulations to everyone involved and all the visitors who made the best of everything.
There was constant music and even though severe and sudden downpours occurred twice during the afternoon, everyone remained cheerful. The hog roast seemed very popular and the tractor rally and vintage cars all stood their ground. There was a lot of interest in the alpacas and the children enjoyed feeding them whilest their parents and grandparents photographed like mad.

We took along some of our hand knitted aran sweaters as well as various garments which we import from Peru.

Despite having everything covered over to keep off the rain for a large part of the afternoon, we sold a surprising amount. Not quite as good as last year, but not far off.

Unfortunately I left our camera at home and could not get mobile reception in time to get Mike to bring it when he came over. After trying up and down the road in the village, I found that I just needed to cross over the road to get reception, but by that time it was too late.

I am hoping I might get a picture from someone else sometime.

After their final soaking of the day the girls (alpacas) were relieved to be reloaded into the trailer and on arriving home galloped into the field to meet up with the rest of the herd again.

Posted by Geraldine at Sunday, September 07, 2008 No comments:

Labels: Dorcus as a baby - now a mum-to-be 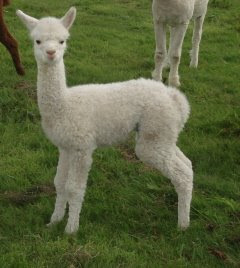 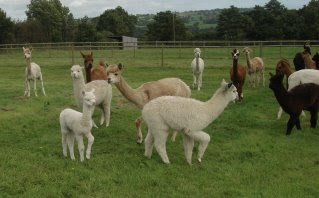 Now he has been here a week it looks like he is taking dancing lessons from Devante, another young white male. See the photos!!
Posted by Geraldine at Tuesday, September 02, 2008 No comments: