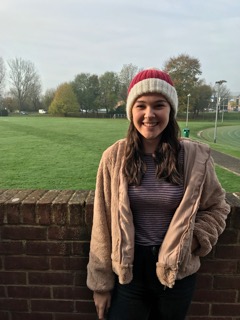 Cick on the picture to see our range of hand knitted hats.
Posted by Geraldine at Friday, September 20, 2019 No comments:

The alpacas are enjoying the late spell of really lovely weather and lazing around in the sunshine.

Even the hens seem jolly at the moment and they are laying well. 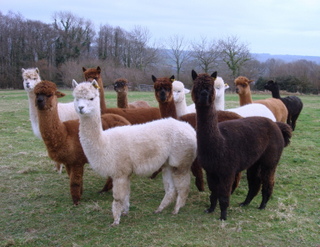 Click on the picture to see our alpacas for sale.


Posted by Geraldine at Thursday, September 19, 2019 No comments:

I spent Saturday and Sunday at a local Dog Agility competition with my older dog, Dolly and young Ted.   They both worked well and Dolly was third in one of her classes but Ted is a bit of a wild card at shows and I need to up my game to make sure Ig ive him the right signals and information.  Dolly is an old hand and we get on well, but she only had one clear round all weekend (3rd place) due to lack of timely information from me.

The alpacas are lying in the pouring rain at the moment.   Sometimes when it rains they gallop for cover in their shelter but sometimes they just lie down.  I think this rain started as a shower and so they thought they would lie down and as it got heavier they did not feel it worth running for shelter.  Who knows!!

I am opening our farm shop this week and every week until 21st December which is the closest to Christmas given that we only open Thursday to Saturday 11.30 - 5 p.m. excepting unexpected circumstances.www.alpaca-stuff.co.uk
Posted by Geraldine at Monday, September 09, 2019 No comments: