David and Jane are going to trim toe nails for us which will be a major job out of the way. Jane is very good with the alpacas and David has his own flock of sheep so those sort of things are just routine for him. We usually do it ourselves of course, but when someone volunteers we cannot disappoint them by refusing!!

Only two more cria due and we are not convinced that one of the Mums is still pregnant. She is showing some signs of discomfort which might mean that she is thinking of giving birth but she does not look as wide as she normally does when pregnant. We are hoping they will both oblige within the next day or so.

At the moment we have 7 female cria and 5 males left after one male and one female cria were sold with their mothers. It would be great to finish the year with two more girls but we'll be pleased with whatever we have as long as they are healthy.
Posted by Geraldine at Monday, August 10, 2009 No comments:

At last some dry weather. The ground is starting to dry out and we can think about topping the paddocks and catching up with jobs that need to be done in the dry.

Mike's sister and her husband are staying for the weekend and have been helping a lot. The drive is looking very neat after being strimmed and the garden is back to its former self.

The alpacas all look nice and fluffy after being damp for days. The grass is much greener after the rain and the warmth of the sun. Let's hope it lasts for a while.
Posted by Geraldine at Saturday, August 08, 2009 No comments: 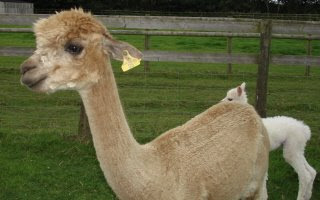 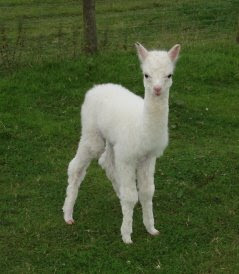 Finally a fine day. This morning I took Jake and Romie training at Tollard Royal where strangely the weather was still foul.

At home it was lovely and we took the opportunity to test our females to make sure they are pregnant. So far so good.

We then selected the alpacas we are taking to the Honiton Show tomorrow. Only two females because the other young ones we might have shown are all pregnant now. Only two males because we did not have many males in 2008 and most have been sold. We checked them over and decided that we ought to spruce them up a bit so we cut their toe nails and trimmed their top knots.

We let the girls wander around in the farm yard until about 7.30 p.m. when we put the chickens to bed and then put them in the barn just in case the weather forecast is wrong and rain comes in. Our two females are very pretty although only one has a fleece which I think might catch the judge's eye.

It should be nice and relaxing apart from the actual showing which can be a bit time consuming.

Pam - our lovely neighbour who helps clean the paddocks twice a week - is going to keep any eye on things (especially the pregnant soon-to-be Mums) and give us a ring if any of the remaining two pregnant females for 2009 give birth.
Posted by Geraldine at Wednesday, August 05, 2009 No comments: