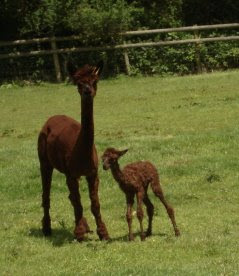 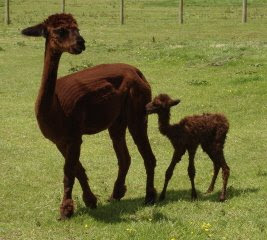 Saphire gave birth to a beautiful brown baby girl this morning.   That's two boys and two girls this year so far in the herd.
The photos are not that good because Saphire was being very protective and did not want me to go too close so I respected her wishes.
Tia blotted her copy book yesterday by running away again (in the sealed paddock), but we left the dogs for hours yesterday afternoon as we went to David and Jane's for a BBQ.  David showed us his sheep - he now has 76 because most of his ewes produced two or three lambs each this year.   He sheared them himself too.  He said it took him all day to do 20 sheep but for a first time effort with no help, I think he did really well.
When we got home there was no noise going on until we got really close to the house and no sign of any problems so we are assuming that Tia settled down with the others.   She did bark a little when we drove off but had stopped by the time we reached the farm gates, so hopefully that side of her problems is improving.    She rarely stands in the garden barking for ages at nothing as she used to.
Posted by Geraldine at Sunday, June 07, 2009