We had a lovely Christmas with David, Jane,Zach and Tara.  The dogs are probably feeling a bit deprived now that they are back to normal dog food without the unexpected extras they have been enjoying.

I was not  going to open the shop for a while, thinking that there would be no customers,but yesterday morning I had a phone call from a  family who were parked in the gateway.   They were asking  when we would be open, so of course I let them in.  They had bought a shawl from us and wanted another for a friend who was ill and had admired it.

Before they left another car  drew up so I  decided to open for the rest of the day,which turned out to be quite busy.

It has been very cold at times over the last couple of days but other than that everything seems to be back to normal.   The ram is restless but seems more content to stay with his ewes and the alpacas  now.  Mike is taking down the electric fence which was protecting our young willow trees from grazing alpacas and wildlife in the bottom paddocks and is going to put it across a possible weak point in the ram's field, just in case he tries to get out.

Everything is back to normal now and as usual there are plenty of jobs waiting to be done.
Posted by Geraldine at Sunday, December 28, 2014 No comments:

Merry Christmas and a Happy New Year from all at Laurel Farm!!

Posted by Geraldine at Wednesday, December 24, 2014 No comments:

Yesterday I went down to the bottom paddock where our four ewes and Henning III the ram we share with another breeder/friend.  To my dismay Henning was missing.  I phoned Mike to let him know and proceeded to search both bottom fields.

I found footprints near the stream which divides us from the next door farm and woods and it was obvious that there was an easy escape route for him.  There was a big gap under the fence where it straddled the stream.  Previously it had been covered in vegetation and so neither us nor the sheep were aware of the doorway to freedom.

I walked all round the area calling in on a couple of smallholdings and I also called in on my friend, Pam, and asked her to keep an eye open if she was out walking her dog, or heard anyone mention a stray.

Eventually I went back home and after checking in with Mike so that he could look after the shop , I went off to try following Henning's trail from another direction.   I climbed over the style at the bottom of our property onto the public footpath and began to walk up towards the road again, when I saw Pam approaching.  Bless her, she had got herself all togged up for walking and was searching as well.   We teamed up and followed the public footpath until we saw a flock of sheep in the distance.

Pam asked if he would go looking for sex with the sheep and I assured her that it was very likely indeed.
When we got close to the sheep I could see a darker figure amongst them  which I felt sure was Henning.

We knocked on the farmhouse door and the lady of the farm told us that her brother was out but she phoned him and Pam and I went home.  The farmer phoned me quite soon afterwards to say that he had moved the sheep so that we could catch the ram, so I drove round and together after some chasing around we managed to separate Henning and get him in the farmer's trailer and bring him home.

Mike was waiting at home and we quickly secured him in a catch pen and later re-united him with his own ladies. I am guessing they must be pregnant otherwise I don't think he would have deserted them. 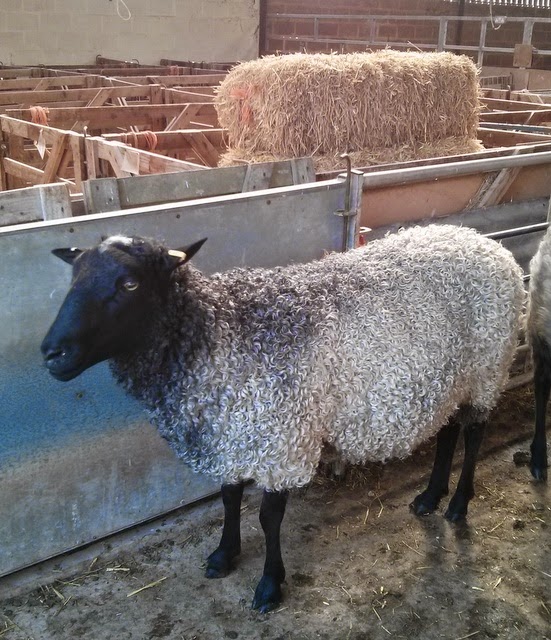 I am going to keep a low profile at lambing time in case the farmer has a few grey (Gotland) coloured arrivals!!
Posted by Geraldine at Thursday, December 18, 2014 No comments: 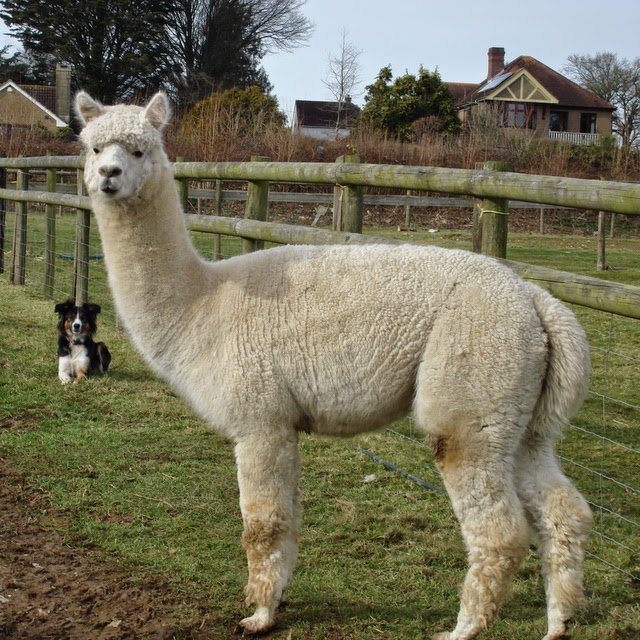 Spirit and Dolly.
Posted by Geraldine at Thursday, December 11, 2014 No comments:

Should have gone to Specsavers!

My son, David came down on Friday afternoon with his lovely collie dog Jax.  He always gets roped in for a few odd jobs when he is here.

I was still serving customers in the shop at dusk and had hurry down to make sure the chickens were shut in before it got too dark.  I usually take a scoop of food to entice the odd strays into the pen.  I did not notice that Jax had gone ahead of me into the chicken coop.  When she saw me she tried to get out, which she did by barking and jumping through the flock.  In the process about a third of them waddled and cackled out of the shed into the field again.

This meant a comedy chase around trying to persuade them all back into the pen so we could bring the male alpacas down from the shop paddock.

Again, I did not notice that Jax was behind me.   I walked up to get behind the alpaca group whilst Mike opened the gate at the bottom.  I was planning a leisurely walk down but Jax had other ideas and decided to help by running them down at speed.   Mike was not quite ready with the gate with the result that four of them missed the entrance to their paddock and joined the females who were coming up for their evening feed.

Chaos ensued, with the females being chased and the males trying to mount them whilst their friends in the right paddock were getting excited and wanted to join in the "fun".  By this time it was nearly dark.

Luckily we were near the barn and with the help of Dolly (my dog), Jax and David we managed to get them all in the barn and we  separated boys and girls into separate pens.  A Few of the girls were still outside which made things a bit complicated.  We would have liked to just release the males and herd them over to their paddock.

In the end we led the four male alpacas  across the field on halters and when they were secure in their own paddock we released the female alpacas, who were, by then, happily chomping on the hay.


Posted by Geraldine at Wednesday, December 03, 2014 No comments: