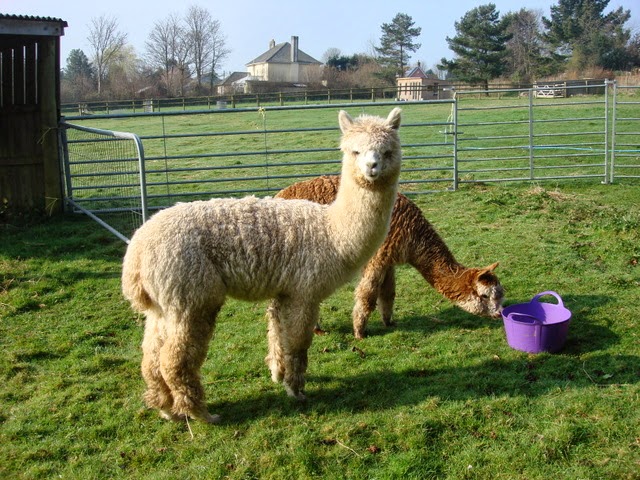 Nanook is a lovely young white male with excellent fleece and we are hoping that when he matures he will bring some valuable new genetics into our herd.  Our alpacas have really soft fine fleece but from time to time we need to add a new ingredient to the mix, so to speak.

He is in quarantine at the moment but we have put in one of our existing males of a similar age to keep him company for the duration.  Of course if there are any problems, which is most unlikely, then Zenon (our young male) will also be effected. 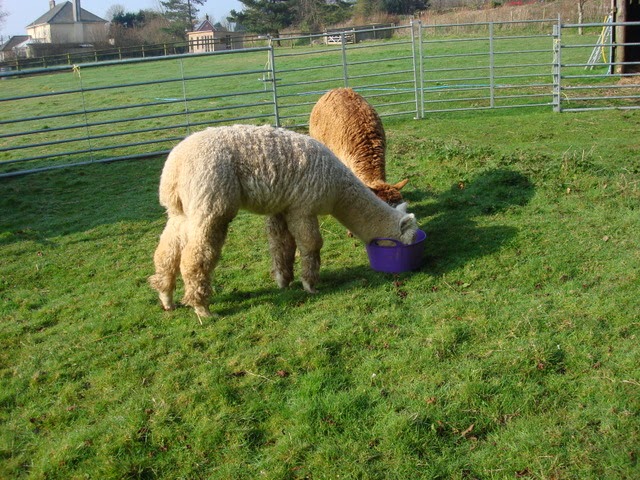 They seemed to get on with each other straight away, although we did take the precaution of spraying Nanook with vinegar.   This is an old farmer's trick to help smooth the path when introducing new animals to the herd.  The vinegar covers the natural smells which might excite other animals and make them aggressive to a newcomer.  By the time the vinegar smell has worn off, the animals are used to each other and no problems occur.  It is a bit like chickens - you put the new arrivals in the henhouse after dark and when they all wake up in the morning the new ones are automatically assumed to be part of the family

It was rather sad to see the last of our Angora Goats leave the farm. The does went quite a while ago but the last three bucks did not attract any interest.  Part of the deal with Nanook was an exchange for the goats.
They left without so much as a backward glance.  There was some debate as to how to get them from the goat house into the transit van which was to transport them to their new home, but I simply put a little feed into a bucket and climbed into the van with it and was immediately followed, ney trampled, by the bucks trying to get to the bucket first.   They did not hesitate to jump up into the vehicle without the aid of a ramp or any other assistance. 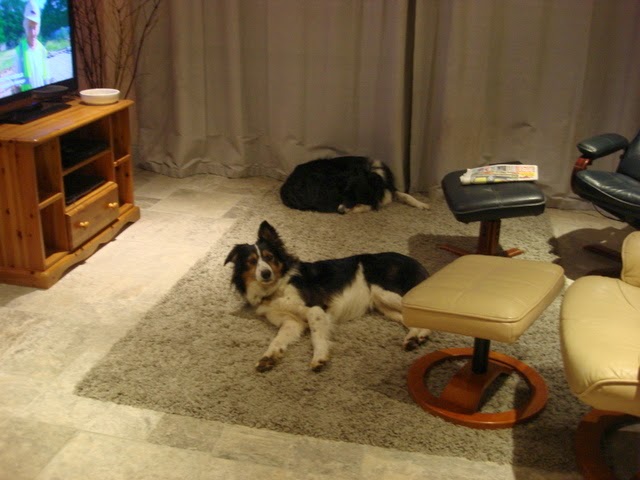 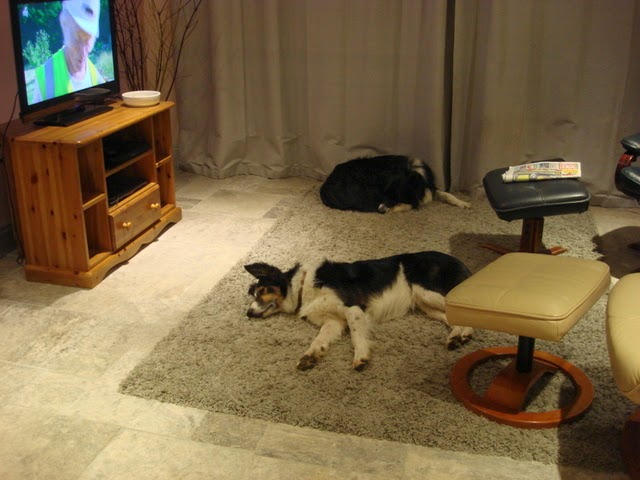 We are looking after my friend's dog at the moment.  As you can see, Dodger has settled in very well and taken the prime spot in front of the TV!!  He likes to interact with any animals who appear on the screen, but soon reverts to the prone position.

If all else fails, read the instructions

To be fair, my friend did read the washing instructions for her new alpaca jumper, but her new washing machine let her down.  See photo for the results of washing alpaca in a hot wash!! 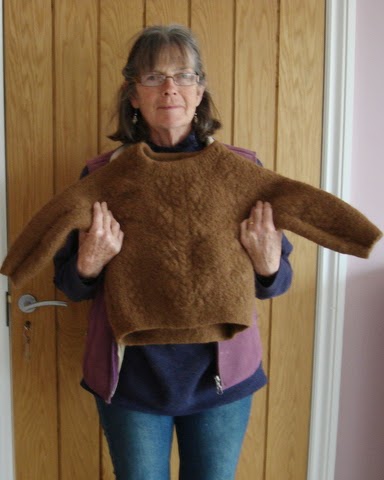 Pam, my friend who knits most of the hand knitted range has designed a new version of the Beanie Hat with a more feminine look. 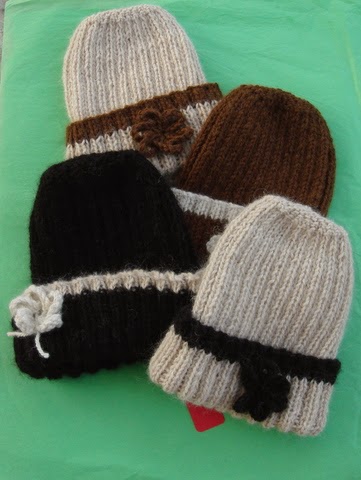 Also headbands in the Glampaca range. 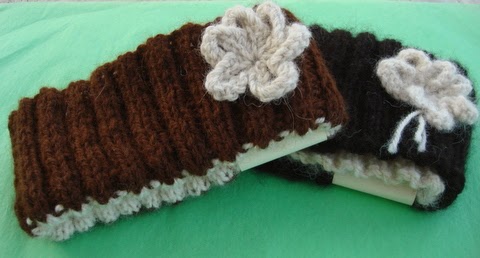 Dolly the sheepdog was sadly missed today.   She is lame (no idea why) and is being lead walked and rested.  Nick and I had a lot of alpaca sorting to do to get males with the right females for mating,.  Normally that sort of job is a doddle, but we realised how much we rely on Dolly's help!!  She does not really have to do much, but the alpacas know that "She must be obeyed" .

We wanted to take one male away from his little group of females and return them (pregnant we hope) to the main herd.   Then we needed to bring another male up and select his group of females.  It took forever and they were extremely uncooperative.  We finally achieved our goal but it took a lot of patience.   Seems like we need a Dolly deputy.
Posted by Geraldine at Tuesday, March 18, 2014 No comments:

Mike was digging a ditch (with the digger - not a shovel) to try and drain off some of the surplus water and had to take down some of the fencing which helps to keep the chickens away from hedges .  Of course there is always one!! He phoned my mobile to ask for help with removing an escaped hen. which he could not catch.  As they associate me with food, it was easy to call "Chick, chick, chicken" and she waddled after me and away from the ditch.

I decided to take a short cut through the goathouse. Just as I was near the gate, my foot got stuck in the mud and I fell forward in slow motion, just managing to save myself by putting both hands deep into the disgusting sticky soil.  I struggled to stand up and picked up the naughty hen and once the matter was resolved hosed myself off.  Luckily I was wearing waterproof leggings and my trusty waterproof coat, so it was only my hands that actually came into contact the  goo.

Later in the day when we were in the kitchen, Mike looked out of the window and asked what the goats were doing in the barn.  He often calls the sheep, goats, by mistake, so I clarified that the animals in question where white with horns and he confirmed same.  At once I realised that I must have left the goathouse gate either open or not latched properly.

Dolly and I went out to try and sort out the problem, only to find that one of the ewes was with the goats and the oldest Buck was being amorous to say the least.  I rushed into the barn and loaded up a feed bucket and to my relief found that bucks are more interested in food than love!!   At least when a ewe rather than a doe is involved!!  With a lot of difficulty Dolly and I managed to get three goats  through the gate into Mike's yard whilst leaving the sexy ewe bleating outside!  Result!

Whilst the alpaca shearer is shearing I sort the fleece that comes off  into grades.  Grades 1 and 2 go into clearly marked bags and anything else does not even make it off the barn floor, except into a rubbish bag.   There is no problem with the Grade 1 fleece as I either sell it or have it spun ready for sale in the shop or for knitting into our products.   The Grade 2 (and some Grade 3) has been sitting in an old stock box and and in our attic for quite a while.  I am not sure of the time scale over which it has accumulated.  I must have sold or turned out some because there is not mountains of it.

Nevertheless it is always difficult to decide what to do with the lower grade fleece that is cost effective.   It is worth so little that it is not usually worth paying the carriage to send it to someone who has a use for it. Today I heard from a company ready to take the fleece to process it for bedding (filling duvets etc:). Although they only pay a nominal price, they will collect, so I have agreed to let them have all that we have.    I am really pleased because I hate the thought of throwing it away.  Most of it is really soft and lovely but too short for spinning.  They are coming to collect it soon.