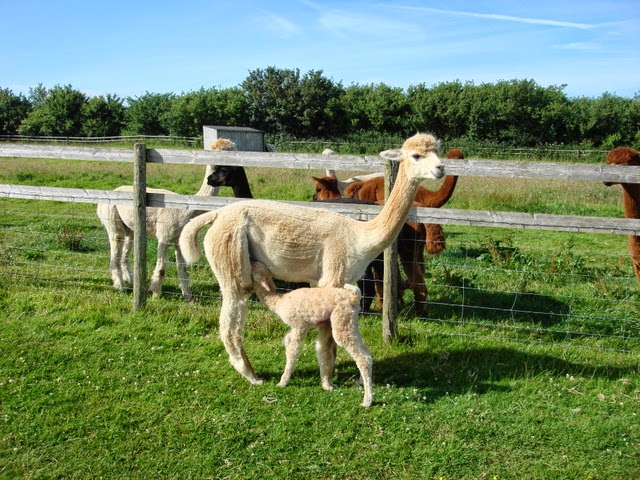 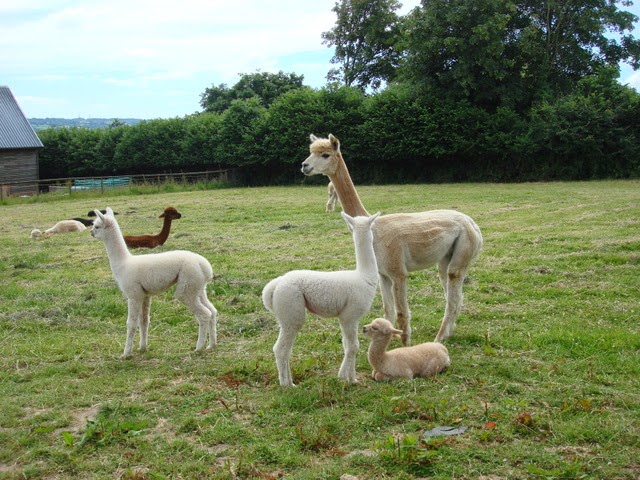 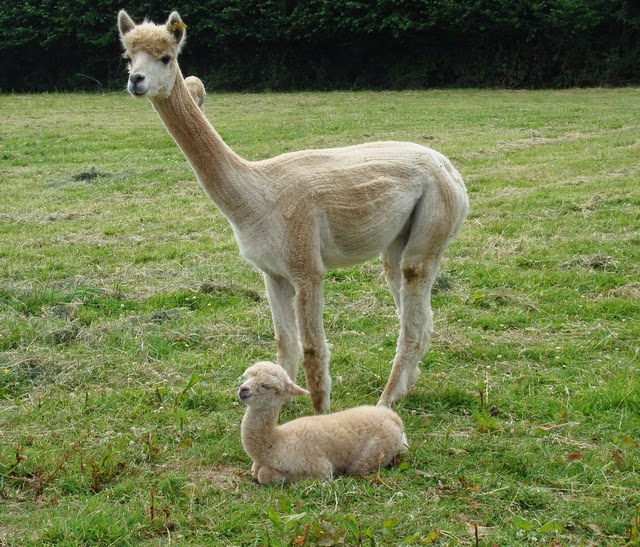 We had given up on Petra as she was well past her due date for birthing.  Must have been a clerical error, as yesterday she gave birth to a lovely fawn male cria.

She was trying to get into the old trough which the girls like to use for bathing when I noticed the head appearing.  We managed to separate her from the herd and get her into the barn.We were  concerned that the legs of the cria were not presenting.   Luckily Nick was working and was about to go to lunch, so Mike and I held her whilst he found the legs and brought them forward so that the birth could proceed.  Naturally the cria has been named Nick - well actually Nicko to keep our South American theme going.

Petra has always been quite difficult to handle but having spent quite a lot of the winter in the barn this year she has calmed down a lot and luckily, as she is quite a big alpaca, has become much more relaxed about everything.

I gave her a shot of antibiotic to try and prevent infection following the manual intervention and then we let her and her new born out into the sunshine.  Normally the alpacas "aunties" just come and have a sniff and register the new member of the herd and then walk away but a couple of the younger females were being over zealous and would not leave mother and baby alone so we moved the herd into the adjacent paddock, leaving Petra  to concentrate on looking after Nicko.

They are all back together now and everything seems to be going well, so fingers crossed for Nicko's future.
Posted by Geraldine at Wednesday, June 25, 2014 No comments:

Rosalind, a pretty white young female, pregnant for the first time, gave birth to a lovely female cria last week.  Rosalind has already been sold but she was so close to her expected date that she has stayed on the farm until the cria is old enough to travel and she has been re-mated. 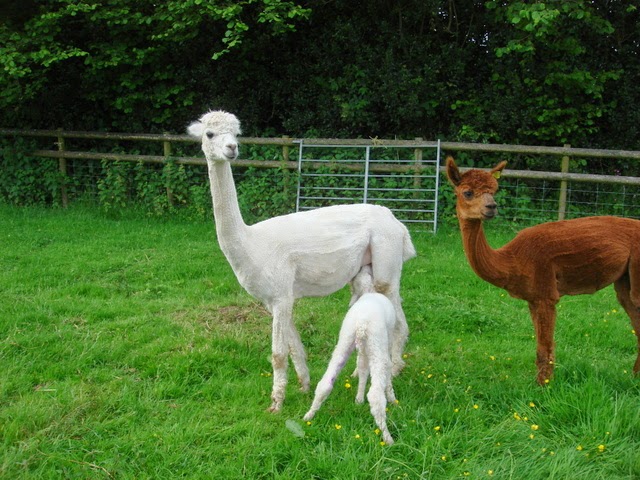 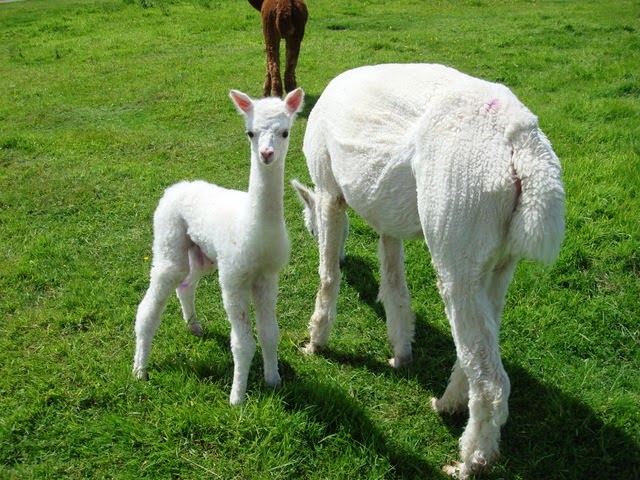 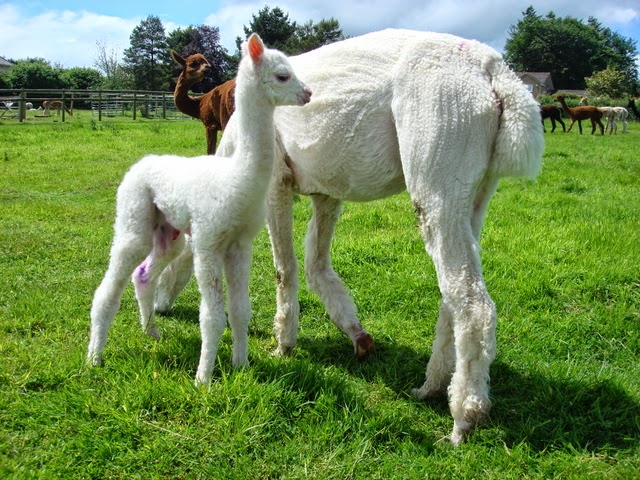 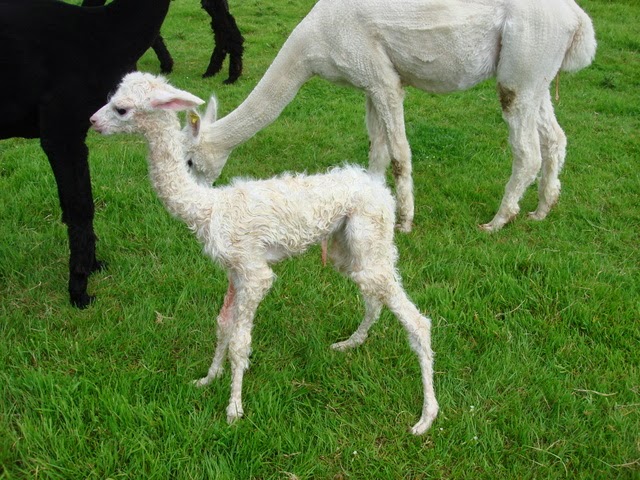 All was going really well except that Rosalind objected to staying in the barn even though all the other females welcomed the chance to get out of the torrential rain.  Even if there were other alpacas in with her she tried to get out, so we could not risk shutting her in.  Must have been her hormones, because we have not noticed any unusual behavior before.The poor little cria (yet to be named) spent more time wet than dry for the first few hours of her little life.

As the herd was shorn recently we have been more concerned than usual about them getting a soaking, but it cannot always be avoided.  At the weekend I noticed that Angelina, Nina's cria, now three weeks old, was milk banditing Rosalind, who seemed happy to feed her own cria and Angelina too.  Maybe with the rain the two cria had lost some of their individual scent, and definitely feeding from the wrong Mum would have changed Angelina's smell.

I became more concerned when it became obvious that it was not just a once off and Nina was walking away whenever Angelina tried to suckle.  We took Nina into the barn and I checked her udder.   She seemed to have a little milk but her udder was warmer that it should be and I suspected mastitis so gave her a shot of anti-biotic.

Despite separating the two Mums, Nina still did not seem to want to feed Angelina, so we called the vet this morning.  He gave her some more antibiotic and medication to help her milk flow although he did not rule out mastitis altogether.  We have now split the females so that both Rosalind and Nina have some company but the cria cannot do any swapping!!  After the vet left Mike held Nina whilst I held Angelina so that she would suckle and since then I have seem her feeding her baby in the paddock.

She still has a few doses of medication, but the future is looking better. 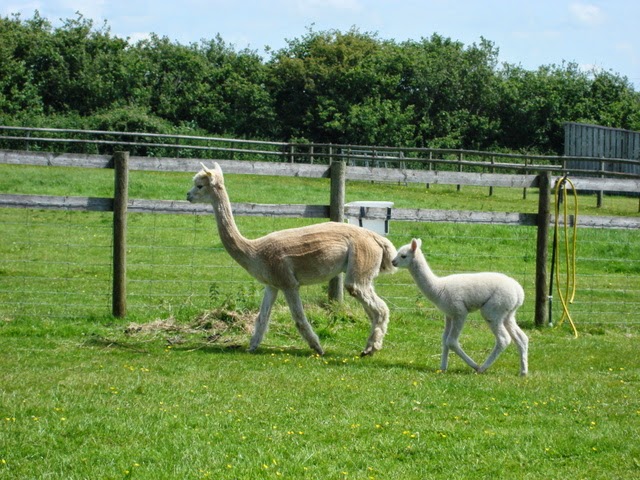 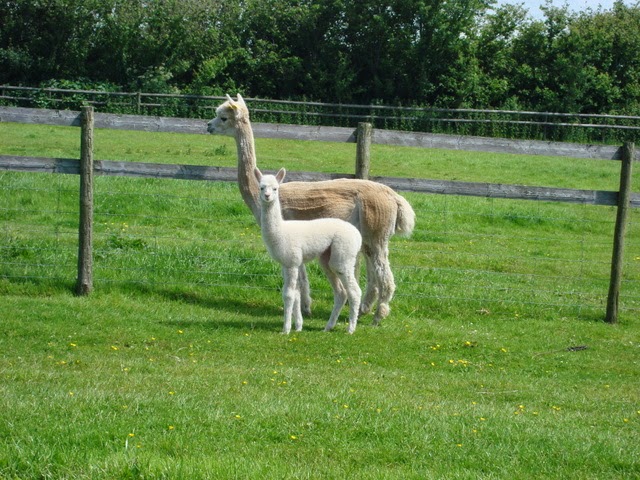 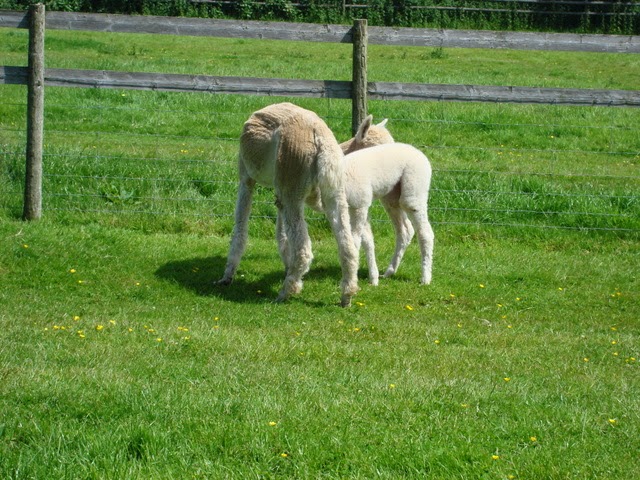