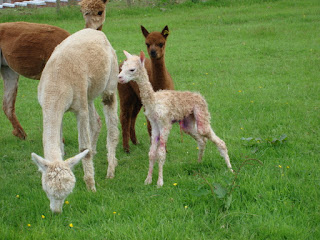 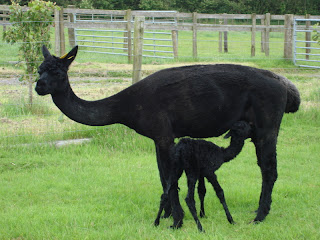 We were doing some agility training this morning when the girls put themselves in the top paddock behind the house.  We took the opportunity to shut them in and after training I went to open the gate and noticed that Nina, a pretty fawn female who belongs to my friend, Pauline, had a pair of legs sticking out of her bottom.   This is a classic clue that a birth is imminent.   Sure enough by the time I nipped down to the barn to collect the purple spray (anti bacterial spray which prevents infection through the navel after birth) and walked back up, she had produced a fawn male cria.   I sprayed him and gave him a vigorous rub with a towel to get him going and left them to it as the weather was fairly warm and there was no rain for a change.

I glanced at the others and noticed that good old Bourree, one of our original herd, had casually given birth to a very pretty VERY black female cria.   She was standing next to another black female, but I soon found out that Bourree was the Mum as when I picked up her cria, she spat at me and tried to run me off.   I quickly ducked in and did the necessary and left them all to commune with nature.

Yesterday Nick and I spent the latter part of the morning doing the hated tagging and microchipping of the cria.   Some had already been tagged but had to wait as we ran out of microchips so they had two goes.  It is only a very brief operation and they don't like being away from their Mums but I still find it very traumatic.


Oh Joy!! Then we checked the buck's feet as they looked a bit uncomforatble.  We found that they needed their toe nails trimmed (which we did straight away) and that two of them had some foot rot.   Nick trimmed their nails back hard and sprayed them with blue spray (Terramycin) .As luck would have it I had just thrown out the dregs of the anti biotic I had in stock as it was getting towards it expiry date so we took an early lunch and I phoned the Vet and went in to pick up a replacement long acting one.

In the afternoon we injected the Bucks and set to work on the does and this year's kids.    We got them into a temporary pen in the barn quite easily by rattling a bucket of food and marching off.    Just like the Pied Piper!!   They are so naughty.   They are quite easy to handle but they climb up on the table when you don't want them to and then won't even go up the ramp when you do want them too.   They stick their heads through the rails of the hurdles and some of them tried to eat the paper sacks and the fleece which was waiting to be sorted.

Anyway it all got done in the end and the bucks look much more comfortable.   We moved them to fresh a paddock as apparently foot rot dies in about two weeks so when they go back to their normal paddock it should be clean and they should be OK again.   Prolonged dry weather would be a help too!!

We were at a dog show on Saturday when Charmain (one of our black alpacas) gave birth to a very sweet little black male cria.    Nick was looking after the farm and said he was up and suckling in no time.  That's eleven so far with about another 10 to go.

At same dog show Dolly won Grade 3 Jumping.  Romie continued her run of 5 faulters and Eliminations, and Charlie seems to have forgotten everything!  Definitely back to the drawing board for him.  Jake did some really nice stuff and waiting at the start most of the time, although Mike brought him out a couple of times because he just would not sit.  Not much point in running if he starts off like that as he gets over excited and does not listen.

The new hens are getting braver.  Mike is going to make them a pen so that when the automatic pophole opens at dawn they are shut in and protected until we are around to let them out.  We are worried that they are very vulnerable if the fox remembers where he got his last feast.
Posted by Geraldine at Wednesday, June 20, 2012 No comments: 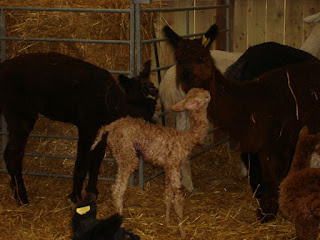 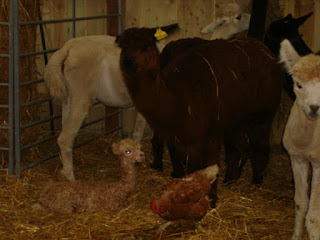 Despite all the bad weather, foxes and what have you, life goes on.   Saphire gave birth to a pretty fawn female cria on Sunday whilst the stormy weather gave its all outside the barn.   She has actually already been sold, so her new owner will get two for the price of one.

The single hen thinks she is an alpaca now and they do not take any notice of her.   She is probably safe in there, but once the alpacas are out to pasture permanently again, she will  not have their protection.   Fingers crossed.  Let's hope she makes friends with the new hens before then and goes back to roosting in the chicken house.
Posted by Geraldine at Monday, June 11, 2012 No comments: 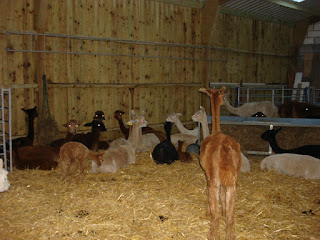 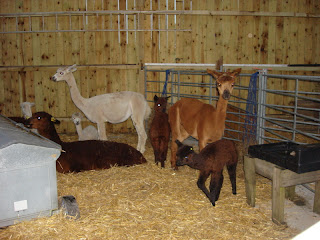 The concrete will be poured into the footings of our new house tomorrow.   That will be a good step forward.    The insulation panels are being manufactured and we are hoping to visit the factory in the next few days to see how the operation works and to make sure they actually exist before we part with another large installment.
Posted by Geraldine at Thursday, June 07, 2012 No comments: 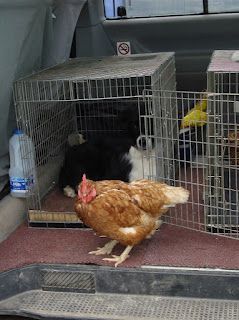 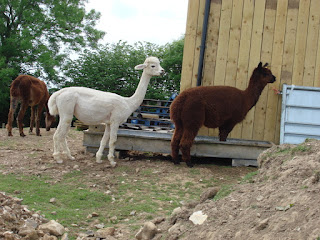 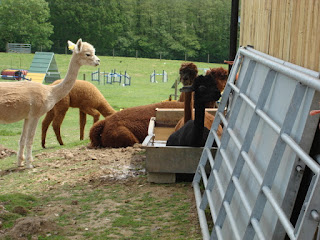 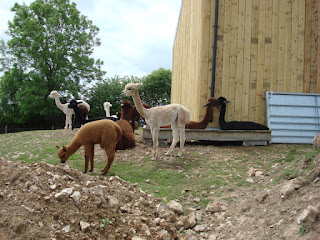