We came home on Sunday 22nd but my pc has been in for repair and so have not been able to update the blog.

Mike's sister and brother in law came to stay on Wednesday and they have been a great help in catching up with paddock cleaning and other odd jobs around the place.   They are like us and like to have something to do.  Yesterday we all went to the Honiton Hill Rally which was originally a tractor rally but which had expanded over the years to include an auction of farm machinery and so on, crafts, demonstrations and the usual catering vans.     The weather was lovely and Mike was particularly happy because it is an event he has wanted to go to ever since we moved here but has usually clashed with other comittments.

Chris, Aew and Josh, Mike's grandson, came down for the afternoon bringing two of Aew's Thai friends to see the alpacas.    They had a great afternoon with Josh being particularly excited by the tractors which are his favourite thing.   Chris took him up into the cab so he could pretend to drive.    They left at teatime and we were on our own for the first time for ages, which seemed strange but pleasantly relaxing.

Nick came today and we separated some cria from their mum's who were getting a bit thin from feeding them.  We also checked the goat does to see that their milk was drying up after weaning the kids, selected four yearlings to take the Chardstock Street Fayre next week and checked that they remembered how to walk on a halter.  Nick commented on how good our stock looks in comparison to some he saw at a local show last week.  He was also extremely impressed with Dolly's natural herding of the alpacas.  It is not surprising that she has "the eye" as her grandmother is a working collie.    She even turned Bourree when the daunting alpaca tried to break away and turn back - no mean feat for a six month old pup.  She needs something to do whilst she is too young to compete in agility so it looks like working alpacas will be her new hobby.   She will like being able to chase them legitimately.

Luciana who had the face abcess is still giving us cause for concern.    Nick opened it up again today and bathed it with salt water and as she was covered in flies I made up a Citronella spray and we spotted neat citronella essential oil around the abcess site to ward of the flies whilst it dries out.   She will need checking daily for fly strike.   She has now had fourd days of daily antibiotic injections and we are hoping that it will now go away permanently.

Everywhere is looking very tidy since Mike put up the shed in the garden.    All the untidy bits an pieces are either in it or behind it.

Hay is impossible to find at the moment so we are rather worried about the coming winter, but Mike is constantly on the case and we hope to find some soon, although it will probably be very expensive.
Posted by Geraldine at Tuesday, August 31, 2010 No comments:

As we are going to be away for a few days we thought it would be a good idea to move all the alpacas to the home paddocks and also try and get the herd splits to a minimum.   To this end we decided to almalgamate the males.  We used the old vinegar trick but it seems it does not work in the rain as the Laurel Farm old boys were not very nice at all to their new paddock mates even though they have been relieved of their manhood.  This was very disappointing but yesterday we thought we would try again just in case it was the rain that negated the calming effects of the vinegar.   We gave all the males a good spray and moved them to all into the chicken paddock together and so far, fingers crossed, harmony rules OK.

We have removed the electric fencing which we put up to keep the chickens in as we are so short of grass and it seemed a waste to have hens in long grass and alpacas chewing their paddocks down to moss length.  We are hoping that the hens will have enough sense to stay in the field where they are relatively safe and protected by the presence of the alpacas.

Nick and I had a toe nail cutting session in the barn as it was very wet this morning.   We cut the girls' toe nails a week or so ago so only that the boys to do.    Ben, our older gelding is always a nightmare when he has his pedicure but thanks to Nick's trick of putting a towel over his eyes as a blindfold he was a pussy cat.   This is the second time we have used this method and he seems to relax and put himself in our hands.

You may remember that Nick had a wisdom tooth damaged when one of the Chardstock 6 reared up and caught him under the chin.  This time we put the feisty one on a halter and tied him up so he could not rear.  We also put a towel over his eyes and he seemed to relax and was much nicer.    They are rather tall alpacas and Nick is rather short, so we do find them a little tricky when husbandry is needed, but we always find a way to get round it even if it does mean a bit of dancing around.

Our new shed/ dog kennel arrived a few days ago and is now sitting proudly in the garden looking more like a summer house than a shed.   We are very pleased with it and are using it as a screen for a storage area for the untidy array of troughs, buckets, bins of string etc: which are important and useful but very untidy.  It also makes the lawn (alright the bit of tufty grass that I mow sometimes) much squarer and more in porportion.  The dogs have been using our new van (Peugot Boxer) as a kennel since we moved the old lorry unit so when we come back from holiday they will move into their new suite.

David and Jane and the children are going to be farm sitting whilst we are away so there will be lots of comings and goings as their friends like to come down for BBQs and parties whilst they are here.

As usual our holiday consists of competing at Dog Agility shows and we are going to the Kennel Club International in the midlands and then on to Dogs In Need which is run in aid of various dog charities.   It will be Romie's first competition at Grade 6 whichshe won into a few weeks ago, so I am really looking forward to it.   Jake is being very good at the moment so Mike has high hope of some clear rounds and even rosettes with him.

We suspect that after a long spell of drought when we have been praying for rain, our prayers will be answered with a very wet holiday!!

Probably won't be updating the blog until we get back as we will be packing the caravan and doing all the last minute jobs tomorrow.
Posted by Geraldine at Tuesday, August 10, 2010 No comments: 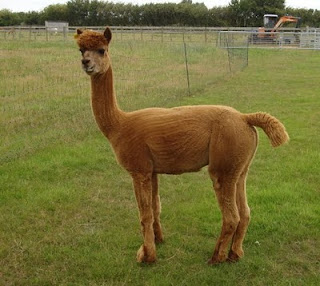 Tessa, the vet, came today to blood test our herd of Angora Goats so that we can be accredited free of Caprine Arthritis Encephalitis (CAE).    Whilst taking the samples she pointed out that they all had lice.   I was mortified and will be straight down to Mole Avon Farm Stores for dectomax and spot on tomorrow to get rid of the horrid little creatures.    We had noticed them before but did not observe them long enough to notice their movement and thought it was debris from the straw!!   Still it is a learning curve and we will be much more aware in future.    We were going to worm them anyway so the dectomax will have dual purpose as it is a wormer as well as helping get rid of the lice.
After one of the new males took a dislike to Colin the Shearer and was really quite agressive we thought it would be a good idea to have him and his friend castrated, so this was included in the visit.   We are a bit worried about the number of flies around but can only be vigilant and use some fly repellant in the hope of preventing fly strike or infection.     She gave them some metacam pain killer and they are already frolicking in the paddock with no signs of being traumatised by their recent surgery.
The important thing during the operation was to ensure that the boys did not lie down so Mike adapted a plank of wood so I could hook it over the bar of a gate to prevent this happening.    Kushing (or lying down) is a default behaviour for alpacas if they are stressed or just don't want to do something.  They use this ploy if they are not in a position to resist in any other way such as running away, kicking or spitting.
We have nearly finished mating for this year with only two left for tomorrow, so hopefully all the girls will hold their pregnancies and produce more lovely cria next year.
Posted by Geraldine at Thursday, August 05, 2010 No comments:

Mike is feeling under the weather and so is taking it easy today.   Having said that we have cleaned out the chicken houses and of course the goats have to be fed and watered twice a day.   They all seem to be in good health at the moment.  We are going to worm them tomorrow or Tuesday just to be on the safe side.   When we come back from holiday the kids will be ready to wean.   I am not looking forward to that as they are noisy enough as it is - they will really have something to bleat about when their Mums are not there to feed them!!

It is very humid but still no sign of the desperately needed rain.   We have moved Chris and Caesar (the newest boys) into the race leading from our garden.   There is plenty of grass there and next to the other males so they get used to being near them.  They look a lot more comfortable since Colin sheared them.

The dogs are much calmer now that Jax (David's dog) has gone home.    She is a lovely dog but I think she caused a bit of excitement and jealousy, especially as I was using her sheepdog skills to move the alpacas.   She is absolutely brilliant at her job although she has not really had any formal training.
Posted by Geraldine at Sunday, August 01, 2010 No comments: