Nick is continuing with the fertilising and spreading Grasstrak which is a mineral supplement for the soil.  This is a good way to get vital minerals into the alpacas naturally.


We are trying to make a start on mating the  alpacas who were not mated at the end of last year.  We thought we would try out our young males but they did not seem at all interested.   They are still a bit young, but I was hoping for at least a little enthusiasm.  It is strange that they are both acting the same way, so it is probably just a matter of timing.   We'll try again in a few weeks.

All the goats and kids seem to be fine.  Number 7 is still having a top up bottle every day.  As soon as she sees me enter the paddock she comes rushing over bleating until I give her the bottle.  She worries me a bit because she is so anxious to get the milk  down her I am worried that she will burst.  Much to her disgust I take the bottle away during her feed so she has a chance to let her tummy settle.

Although we could do with some rain, it is lovely having nice spring weather.  The female alpacas in the winter paddocks spend a lot of time paddling in the stream or in their water hole which is spring fed.  When we brought the herd up to pick out the ones for mating they kept stopping at the dusty patches for a lovely roll.
Posted by Geraldine at Wednesday, April 27, 2011 No comments:

We went to a dog show at the weekend and Nick looked after the farm.   Sadly one of the little kids that I had been feeding suddenly died.  He seemed fine and then the next time Nick checked he was dead in the shelter.   He had been scouring a little and we had given him some medication but it was difficult to tell what caused his death.  He was quite full so he might have gorged himself on the milk bucket, or maybe he was just destined not to live.

The other problem kid number 7, seems to be coping alright and we are keeping a close eye on her.  Her Mum is the Doe with only one udder working and twins to feed.

The  good news is that Romie with her brother, Nikey, made it to the semi finals in the knock out pairs and have qualified for the finals.  Unfortunately they are held Up North so we probably won't be going.  We'll see.

The grass is growing at last - Nick has been fertilising the farm and I have been battling with the grass which we laughingly call the lawn.  Shame it all has to grow at once.

The alpacas are loving the sun and spending a lot of  time lying around soaking up the rays.

Hooray - Dolly can do the weaves on her own now so it is just a question of getting more speed and experience before she is a fully qualified agility dog.    I will be getting her measured at Kernow show at Easter.  There is no doubt that she will be a Large as opposed to Medium or Small dog for competition but it has to be officially confirmed.
Posted by Geraldine at Wednesday, April 20, 2011 No comments: 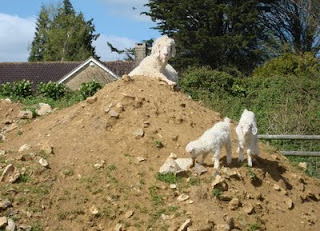 ﻿This is the oldest goat and her kids learning mountain climbing on our special goat mountain.  Today we tagged the kids so that they can be identified easily.  I think Defra should come and do them.  Poor little things have to have one in each ear and you should hear them scream.  Still it is over quickly and they scream just as loudly when they see me coming with the bucket.
Number 12 and number 7 are still a concern but they have been promoted from a bottle to a bucket.  We make up some Lamblac and put it in a bucket which has teats on it.   The bucket is suspended on a partition Mike made in the goathouse and the theory is that they can get the milk ad lib when they cannot get it from their Mums.  At the moment we still have to guide them on to the teat but once on they stay and suckle until full.  They have been shut in most of the day because it has been very cold and wet, but they usually love frolicking in the sun.
I took some of our young alpacas to a show at the weekend.   There was lots of competition and the bigger breeders brought along multiple entries  for most of the classes.   We only achieved a  fourth and a sixth but I was not displeased as both were in quite big classes.
The event was held at the Hand Equestrian Centre at Clevedon which has been revamped since I last went there to a dog show.  It now has quite a smart cafeteria, bar, good quality stables and an excellent arena.
There was a really good atmosphere and although it was quite hard work because, being on the committee, I was involved in setting up and breaking down as well as showing our own animals.
My friend Pauline came along and luckily was able to show one of the boys as two were in the same class.  She stayed for quite a while and we were pleased to be able to spend some time together as we don't see as much of each other now we have moved to Devon.  On the Sunday my client/friend Anita came along and was interested to see the show alpacas.  She commented that compared with showing other animals (she has bred cattle and dogs at least in the past) alpacas and their owners do not present themselves very well.   She thinks we should learn some ringcraft!!  I agree with her actually, but I am one of the worst offenders for lolling around whilst the judge goes backwards and forwards trying to decide the winners.
Another alpaca friend has a really good alpaca and he quite rightly won the Supreme Champion.   She has just gained planning permission to put a house on their property - so it is obviously it is her year.
We are now catching up on our matings and Emilia, a really good alpaca who has rejected all male attentions up until now suddenly decided when we were spitting off some alpacas (testing them for pregnancy by letting a male near them) suddenly decided to sit and allow herself to be mated.   There is no guarantee that she will be pregnant but at least now she is acting normally.
I have suspected that the Blue Tongue vaccination has effected fertility and behaviour amongst our girls and had already decided not to use it this year.   As it happens there have been no reports of Blue Tongue in the UK so far this year.  It might be just coincidence but I don't believe that.
Last year  and the year beforewe had one or two females who were young and healthy but they did not become pregnant and we have never had problems before.   Anyway we shall see how it goes this year.
The alpacas who were shown are being kept in quarantine at the moment and will not be allowed back into the herd until the end of the showing that we intend to do.   That will be about June.  They are happy enough as there are five males and a couple of females so they are not alone.
﻿
﻿
Posted by Geraldine at Wednesday, April 13, 2011 No comments:

We had a farm open day yesterday.  It was a pretty low key affair but we had quite a few visitors and the shop did  well.   Our next event is on the 14th May and is a coffee morning in aid of Devon Air Ambulance.  There will be coffee and biscuits included in the £1 entrance fee (children free), a cake stall, raffle, and an agility demonstration- which will actually be an agility course set up so that any of our friends in agility can practice.  One of our neighbours, Tony is very knowledgeable about antiques and he is going to be the "expert" for an Antiques Road Show for which donations will go to the charity.  If the weather is good it should go quite well but could be a disaster if it rains.  The curse of all village fetes and similar events!!

Today we transferred the last two sets of twins back to the goathouse.  Last night they slept without the benefit of the heat lamp and woke up quite lively this morning, so fingers crossed they will  be OK overnight tonight. They were all having a great time during the day frolicking in their paddock.   I shut them in fairly early this afternoon so they did not over tire themselves after being used to quite a small enclosed space for most of their little lives.

When I did my daily walk round the farm with the dogs which includes checking that the alpacas in the winter paddocks are all present and correct, I came across a dead owl.  This seems like a very unusual event to me as I have never seen one before - only heard them in the night or seen them flying around.  I think it was a tawny owl but I could find no obvious reason for its demise.  It seemed to have its head in a small hole in the ground (not a mouse hole though) and might have lost a few feathers from the back of its neck.  I had to pick it up and put it in the manure trailer so the dogs did not pick it up.

Dolly has been in season since last week and unfortunately Charlie managed to end up playing with her in the garden and one thing led to another.   I thought I heard a dog squeal and went to investigate and found him taking advantage of my little treasure.  She was extremely distressed as I had not had time to explain things to her.   Luckily Charlie has been castrated and so no unwanted pregnancy will result.  I just hope she won't have the dreaded phantom pregnancy.   She seems fine so far and although Charlie is being walked on a lead and shut in his crate for quite a lot of the time due to his bad leg, we have to be very careful  as he is very interested in her and she seems to want to tease him.   I suppose it is not surprising really as they are best friends anyway.   A lot of people think that Charlie is her Mum as they look very similar.

In an effort to make her less interesting I gave her a bath this afternoon and as everywhere was wet and messy anyway I thought I might as well bath the others so 5 of the 7 dogs are now sweet smelling and looking smart.  I thought it was still too cold for Sandy (our seventeen year old terrier) and Jake is too big and heavy for me to deal with on my own.  Mike and I will have to give him the treatment another day.
Posted by Geraldine at Sunday, April 03, 2011 No comments: