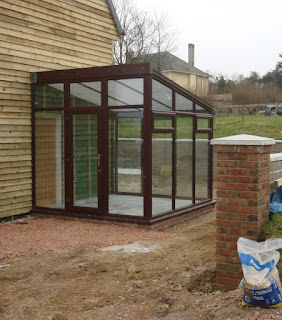 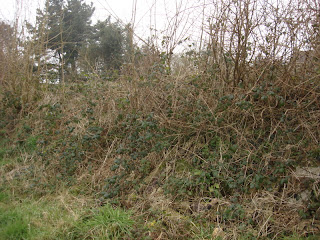 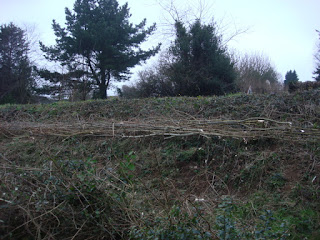 The new porch is in place, under floor heating fitted and tiling done. Just waiting for the back wall to be be plastered and it will be complete.  Now in the hands of the plumber and electrician for the finishing touches - and of course the carpenter who will be fitting the kitchen.

Nick has been laying the hedge along the frontage of the farm.. He does this in the traditional way using hazel sticks to hold the cut layers in place until they get used to growing that way.   The before and after photos show what a good job he has done.   When the sap rises and the hedge starts to shoot it will provide a good screen and will look really good.

All the alpacas seem to have got into their new routine.   The weanlings know that when Dolly and I show up with the feed buckets it is time to trot into the shelter.   If they don't react quickly enough Dolly just reminds them.

Alario is happy in the lower paddocks with his four ewes.  They are acting as a small herd and the sheep seem to look on Alario as their leader.   I can see why alpacas make good sheep guards now. 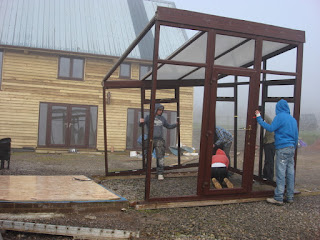 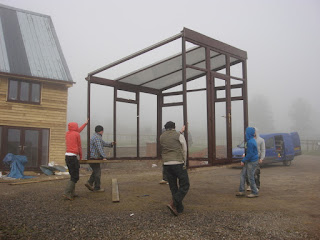 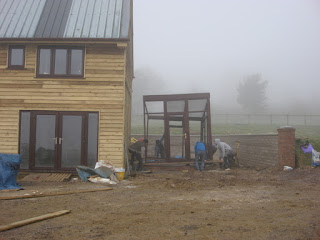 The conservatory which was attached to the wooden lodge has now been moved and forms the porch to the new house.  They removed the glass and carried the frame across the yard where they resited it and then refitted the glass.

Most the the alpacas are out grazing again after several weeks in the barn.    We have kept the female weanlings in with some companion females so that they can be finally weaned from their Mums without too much stress.   They all seem very happy to be outside again even though the grass is not really much good yet.  www.alpacas-for-sale.co.uk
Posted by Geraldine at Monday, February 25, 2013 No comments:

Dolly came home from the Vet on Friday and continues to be the old Dolly we know and love.   Now jumping over fences and chasing around as usual.  I am going to risk a little agility training today, since she has already decided she can jump without any pain.

Now Mike's dog, Jake is the invalid.   He has cut his pad on the scalpings which form the farm tracks, we think.   Some of the stones can be a bit sharp, although this is the first time I can remember any of the dogs actually being injured.   He is feeling very sorry for himself, but is healing very well and there is only a very slight wound left to see.

The weather is lovely at the moment and we have been tempted to put the alpacas out to graze but there is still not much goodness in the grass so we decided to keep them in for a few more weeks.   We hope that when they do eventually go out the grass will be really full of protein and get them back into condition fast.

www.alpacas-for-sale.co.uk
Posted by Geraldine at Monday, February 18, 2013 No comments:

We decided to move the sheep out into the race between two paddocks where there is some fresh grass.   They will also have access to Alario's paddock and shelter so the dynamic of the group will not have to change.   We also decided to treat them with Fasinex against Fluke as they are the only livestock living out in the damp/wet conditions at the moment and so are most at risk.

Nick was in today and so he helped me to catch them and drench them with the medication. They are very easy to handle and I am pleased to say, seem to be holding their own with body condition.

Dolly is still on a drip with antibiotics and fluids.  She has had her Xrays and more blood tests and the Vet seems confident that she has pancreatitis.   She is staying in overnight tonight again and her progress will be monitored  and assessed tomorrow.
Posted by Geraldine at Tuesday, February 12, 2013 No comments: 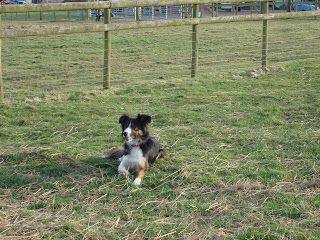 On returning home from a weekend at David's house in Salisbury with me, Dolly was decidedly under the weather.   She would not eat or drink and this morning when we were feeding the animals she was very lack lustre - walking through gates instead of jumping the 4ft fences and lying down whenever she could.

I finally got her to eat a little rice and meat but she still would not drink.  She brought up her one meal and six hours after eating it had not been digested.

We decided that she should go to the vet and he found her to be very dehydrated and tended to agree with me that she might have a blockage and he mentioned pancreatitis which I thought was associated with older dogs and maybe a fatty diet.  Neither of these apply to Dolly.  She has not got a high temperature.

She is now languishing in vet hospital with a drip to try and re- hydrate her quickly.  Initial blood tests have shown no cause for concern but also no answers.

The people who have bought our log cabin came today to remove the decking.    We have now locked the back door and removed the key to save me from myself.   I normally exit through that door when I am putting the dogs to bed or going to the office.   There is quite a big drop there now, so I need to be protected from accidentally launching myself out of the living room into the air in the dark. 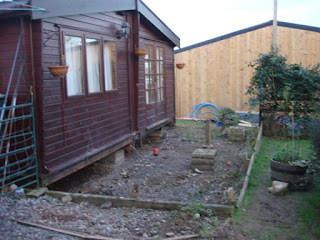 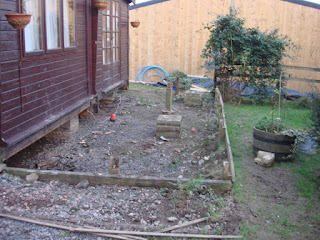 It is amazing how much rubbish has been lost under there over the years - including a key which I remember dropped through the gap when I was trying to pull the door shut against a really strong wind. 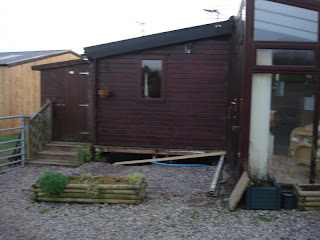 Posted by Geraldine at Monday, February 04, 2013 No comments: 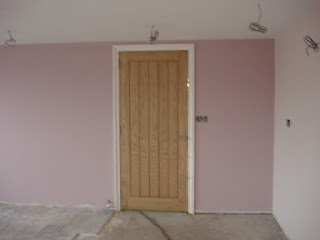 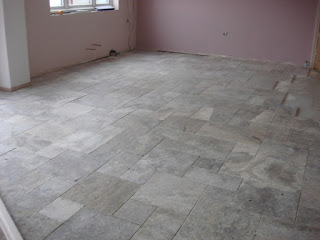 Nothing much has been happening with the animals.  They are permanently hungry and look upon us as food trollies.

The good news is that the house is coming along apace.   The new doors have all been fitted and the floor in the living room is nearing completion.

We chose the stone floor in October so when they first laid it and it seemed quite dark, I was a little concerned, and thought that I had remembered it wrongly.   It seems the tiles were just wet and in fact they at least as good, if not better, than I recalled.   Jon (the builder) has done about half the room and the tiles have had their first coat of sealant.   When finished they will be grouted and finally sealed.
Posted by Geraldine at Friday, February 01, 2013 No comments: