What a change in the weather.   Really lovely and sunny and forecast to last for the next few days.  The alpacas are making use of their dust bath -  small bare patch in their paddock which they love rolling in.   I sprinkle it with  Diatomaceous earth, a very fine mineral which helps keep mites away.  Also good for preventing scaly leg in chickens.  They absolutely love it - even the new cria can be seen rolling away in the sunshine. 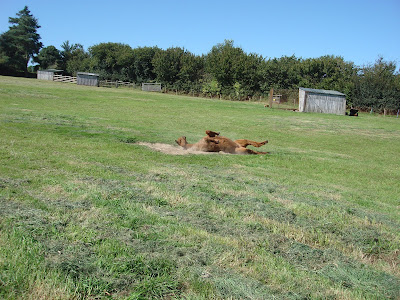 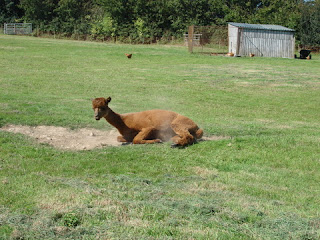 Click on thebottom picture to visit our Alpacas for Sale website
Posted by Geraldine at Friday, August 23, 2019 No comments:


We have sold three of our alpacas in the start of our herd dispersal.

A lovely couple from near Exeter have bought three alpacas which came  to us a year or so ago.


They want them as chicken guards/pets and already have farming experience with their sheep, so they should have no trouble integrating the alpacas. They have been living happily with our boys up until a few days ago when we separated them to await their pre-movement TB test prior to moving to their new home. 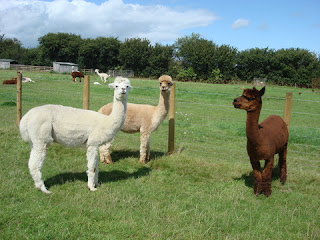 You would hardly believe that it is still summer today.   It has been raining and drizzling since first thing this morning.   I did manage to clear the paddocks and clean out the hens but really there is no incentive to do other than the essentials and basics. 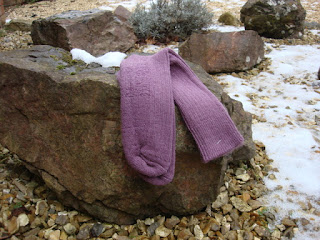 All the alpacas seem to have decided to stay out in the rain.  I suppose because although continual it is fairly light most of the time.  If it gets heavy they usually gallop to shelter and the hens go running and flapping to their house.


Bed socks seem to be popular this week which is surprising because they are more popular in the winter usually.   Even though we call them bed socks, they are 90% alpaa and can be worn with any footwear - even wellies.   I also use mine as slippers on carpeted areas.   They don't work quite as well on tiled or wooden surfaces as they only have a single layer sole.    Our walking socks are probably the best for indoor slipper replacement on hard floors as they have a lovely thick cushion sole.

Click on the photo to see our range of socks.

Posted by Geraldine at Wednesday, August 14, 2019 No comments:

The weather has been very changeable today so far and several times we have seen the chickens and alpacas dash for cover when a really heavy shower starts only to come creeping out again a short while later.

I am now wearing a pair of our every day socks which are 55%  Alpaca but they are ideal in this sort of weather because they are light weight and still thick enought to wear in wellies or walking boots around the farm.

They have been really good as I can quickly slip my boots on over these lovely soft socks and dash out to collect eggs or clear up in the paddo
They are also quite smart in shoes or trainers. 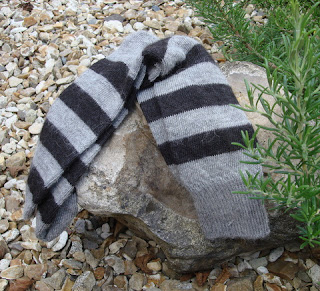 With heavy rain in the forecast we have been keeping an extra watch over the alpacas.   The females who live with the hens often try and shelter in the hen house if there is a sudden downpour but they cannot all fit it.   If it is late in the day or more than a quick shower I usually walk over and guide them to their shelter where they can all fit in.

I am not sure if they appreciate it because they often stay outside the shelter even when it is close to hand.

The hens, on the other hand, run for cover whenever heavy rain or strong winds come along.

Last night I shut them all in early as the rain was heavy and forecast to becomome torrential, which it duly did.   Still it saved my having to water the tubs of flowers and the back garden, which was nice.

Click on the bottom picture to see our alpas for sale. 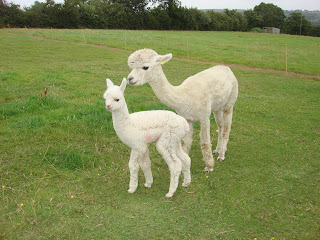 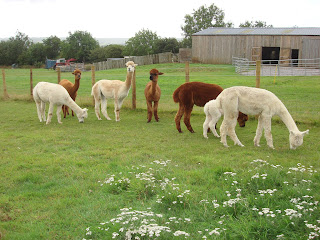 Posted by Geraldine at Saturday, August 10, 2019 No comments:

Took my dogs, Teddy and Dolly to an Agility Competition held at West Point Showground near Exeter.  The show was run over four days commencing last Saturday until Tuesday.

I am having a crisis of confidence at the moment as I am having difficulty remembering courses.
Despite that, Dolly did several nice runs but made some mistakes and I made handling errors too.  She qualified  10th for the Blenheim Palace Agility Stakes but it is 135 miles away so I don't think I will go.

Ted was a bit wild for the first couple of days but then I decided to go back to basics and did  some serious sit wait training in the car park which we then transferred to the competition ring.  Although he did not get a clear round he was more responsive and allowed me to leave him at the start so I could get a head of him.

We have sold 3 alpacas which is a start for our closing down sale.   The young couple who bought them seem very keen and subject to a clear pre-movement TB test they should be ready to go in a couple of weeks.

www.alpacas-for-sale.co.uk
Posted by Geraldine at Thursday, August 08, 2019 No comments: