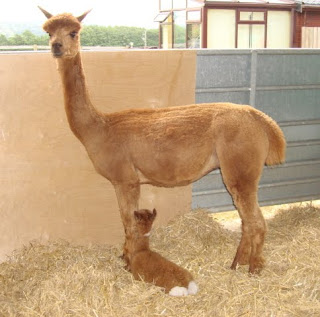 Luckily we decided that one of us should stay at home on Saturday.   As Mike is having a problem getting Jake to lie down at the start of his agility, he decided it was better if he stayed at home.  I was not too keen on driving the two hours down to Cornwall on my own, but did not want to miss an agility competition.  I was also aware that I had volunteered to help on a ring, so set out at about 6.30 a.m.   I had a good day and helped on the ring for quite a lot  of the day except when running my dogs, which to be fair took quite a while as they had three classes each.    Both dogs went fairly well, with Millie doing her usual noisy silly things that just stop her getting a clear round.   Romie had a couple of poles down in her first two classes but luckily had a clear round in the final class (Grade 5 Agility) and won it, thus getting us into Grade 6 and equal to the other dogs from the same litter, most of whom won out ages ago.
Mike phoned at about 10.45 to say that Constance, pictured above, had given birth to a female cria who was doing well.   She arrived a couple of weeks earlier than we expected but seemed to be fine.   When I was driving home Mike phoned again wanting to know where the Colostrum was as the cria was very poorly.   He noticed that she was flat out in the paddock and when he went to check she hardly responded at all and was very floppy and basically out of it.    The vet found that although she had seemed to be suckling she had not actually taken any milk as the waxy plugs were still in the Mother's teats, so she had not had her vital first dose of colostrum which helps to give the cria immunity to various bugs which they can pick up from the farm.   She gave her an injection of glucose straight into her stomach.
I was only about fifteen minutes from home so as soon as I got in we tube fed her with powdered colostrum made into a milky solution, which revived her slightly.  We tube fed her several times as she did not have the strength to take her mum's milk and in the morning we milked some of the goats and fed her goat's milk.  I could not get much out of them and we assumed that the kids had already had their morning feed, so we shut the kids out of the goat house for an hour and then milked their mums again.   This caused an awful lot of bleating and running around by the kids who did not want to be parted from the does and certainly did not want to share their milk!!
Later in the day she was still not feeding properly and I was concernerned that Constance might have mastitis as her udder was very hard, so Tessa, the vet, came out again.  She did not think that she had mastitis but that the problem was the cria not suckling.   I milked her as best I could, but as anyone who knows alpacas will tell you, it is very difficult to milk them.    It seemed to relieve the pressure a bit and we continued the tube feeding through Saturday evening and gave her a feed at midnight.   We went back at 3 a.m. to feed her again but were encouraged to find that she was finally up and about and suckled whilst we were there.   We checked again at 6 a.m. and she was even livlier and suckled again, and so we let them both into the paddock with the other mums and to our delight, the cria ran all the way down the paddock and seemed tbe really happy to be out.   We have checked them regularly all day today and have seen her feeding several times and instead of being nearly always floppy and down, she is nearly always standing or sitting up or even running around.
We won't be out of the woods for a week or so, but we are hopeful that she will survive.  In the meantime she and her Mum will be sleeping in the barn at night as we do not want to risk the cria, now called Nerissa, getting too cold or wet.
Posted by Geraldine at Monday, July 19, 2010