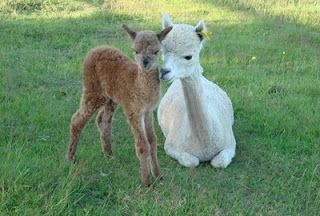 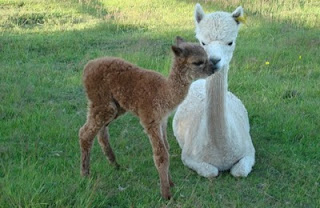 Apparently there was a problem with our website before the weekend.   David googled to see our standing in the search engine and his firewall went into panic mode as it detected a lot of viruses.

I contacted  Red Dragon IT who host both our domain names and they promised to look into it. Our website managers also looked into it but could find nothing at their end.  It seems it was something to do with Google and stolen identity.   Anyway, it seems to be OK now.  I really cannot understand why anyone would want to sabotage a small business - must be just some wierd form of fun because there cannot be any money in it.

We have a book called 1001 uses for Vinegar.  We have just found the 1002nd.   Nick told us that when introducing a new animal to a herd it helps to spray them with vinegar as the other animals do not like it and by the time the smell wears off they have got used to the newcomers.   Yeh Yeh, I thought, another old Farmer's tale.   Well you may remember that we purchased a young in tact male recently and we were concerned that when he came out of quarantine we would have a problem integrating him and his companion (our lovely little Don Javier) into the bachelor herd of stud males.

We were right.  We moved the two youngsters and the four working males into a new and fairly large paddock together and the stud males attacked the youngsters - or rather tried to dominate/mate them and chase them around in a very aggressive manner.  Pedro is a VERY strong character with other alpacas, although he is a Teddy Bear with humans.  Things were definitely getting very out of hand (3 in a bed comes to mind, although it was a paddock).

We separated them and rescued the littlies and sent the big boys packing.   I remembered Nick's strange advice and decanted some malt vinegar into an empty spray bottle and we sprayed the young boys and put them back in the paddock with the bullies.  Pedro came bounding over like a bull in a china shop skidded to a cartoon halt, took a step back and completely relaxed and sauntered off as if  Javier and Spirit were the least interesting thing on the planet.   The other males took a similar approach apart from Bono who seemed to  fall in love with them, but he is quite a gentleman and caused no trouble at all.

Nina gave birth to a pretty male cria this morning.   The head came out and a long time passed without any sign of movement so we broke the membrane and the cria began to breath, although somewhat messily, and eventually his feet came out and he took the regulation nose dive in to life on earth.  Unusually, however, a large part of the afterbirth came out too and there was more blood than we are used to seeing so as a precaution we called the vet in case there might be a problem.  Jonathan, luckily was at the Ferne Animal Sanctuary, which is only about 5 minutes away.  I got the cria breathing better by holding him upside down and then putting my finger in his mouth until he started sucking which made him choke up the fluid and he stop struggling for breath.  I continued to tap his chest for a time to keep things moving, but he was fine. 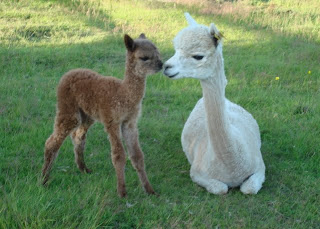 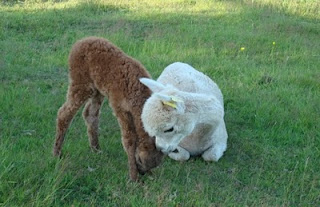 Jonathan pulled the remaining afterbirth out and gave Nina an injection of Oxytocin which is used to bring down the milk if a female is not producing any or enough but also causes uterine contractions and can help if cleansing (getting rid of the afterbirth) seems to be slow .  Jonathan said that she was still dilated and so it was a good thing to have the oxytocin to prevent prolapse.

Mike has moved all the earth being dug out around the barn into the goats' paddock to make a mini mountain for them to play on.   At the moment it is just a pile of earth but once the grass grows it will look fine (we hope).
Posted by Geraldine at Monday, July 05, 2010