Still enjoying the intermittant rain but it does mean that we have to dash in and out to get the jobs done without getting soaked.   We are well on the way with this years matings although two black females who have been mated to outside studs have failed to hold.   One was due to give birth in a few weeks time but one was only mated recently so that is understandable.   We share a scanner with a fellow alpaca breeder so I am going to have it and scan the girl who is due soon in the hope that she was sitting when tested by the male in error.  Perhaps she has forgotten she is pregnant.  Some hopes.

Chickens are still a mystery.  Another one died yesterday for no apparent reason.  We isolated two in a separate pen as the start of testing to see which ones are laying eggs and they escaped.   We think one is back in the main pen but one is a pile of feathers in the drive -  Fox is back.

We are trying to decide whether to stop selling for the year now as we are worried that we will not have enough youngsters of our own next year if we keep selling pregnant females.   On the other hand maybe we should keep selling this year in case we do not get any interest next year.  Good dilemma but difficult. 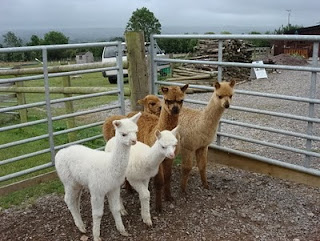 I am off to a dog show in Cornwall tomorrow.  Mike is going to stay behind as we still have two girls about to give birth and one is due any time.   As we have some who did not take last year as well as selling pregnant girls and an aborted cria, we cannot afford to take any chances with these two.
Posted by Geraldine at Friday, July 16, 2010