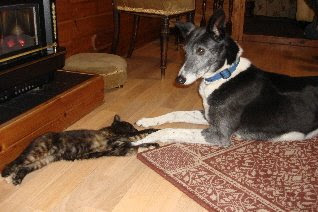 We have been worried about the dogs and the kittens, especially our black and white lurcher, Maddy. She has been transfixed by them since they arrived and in her obsession she has lost weight and is interested in little other than the kittens. We are now nearly convinced that she actually likes them rather than having a desire to kill them. See the photo above. I had a little circle of dogs sitting nicely for a cocktail sausage each this evening when they were joined by Suki who also sat and took her turn for a piece of sausage. The dogs simply accepted that she should have a turn too.

I have a nasty shock this morning when my friend Pam and I were cleaning the paddocks. She called me over to look at something one of the dogs had uncovered in some hay by the hay rack.
It was a leg, very fresh, with white fleece on it. At first I had a horrible thought that it was from a white cria, but on closer examination thought it must be a sheep's leg. Even so I had a quick count of cria to reassure myself. I think perhaps a fox or some other preditor was carrying it and might have run into the alpacas at the hay rack. Possibly they scared him into dropping the leg. I understand from my neighbour that foxes often clear carion so perhaps it was from a sick,dying or dead animal.

Mike is progressing well but gets tired quite quickly.

The chickens seemed to have suddenly stopped laying. Only 2 eggs today. This has happened before and then we find a stash of eggs somewhere, so we are hoping that they have just moved. I will strip the barn tomorrow so that I can check the hay and straw bales properly.

We are having difficulty in sourcing small bales of hay. It is possible to get big bales but we have no means of handling or storing them. We have managed to buy some from Colin who lives a mile or so away. He normally sells to customers who buy small quantities so has no means of delivering. David is going down there on Friday to collect a couple of loads in our trailer.

Halter training has come to a grinding halt after a promising start. I will have to get going again next week. We have identified 9 alpacas which might make the grade for showing, although our browns are now at a disadvantage because the mid browns and light browns are now classed as fawn which means they are not competing against their peers but against the nearly white and and light fawn alpacas. I am going to try and get hold of a colour card to find out what the new colour classes really are.

Loads about the animals but only one tiny little sentence about the lovely Mike.

Make sure you take care of him!!