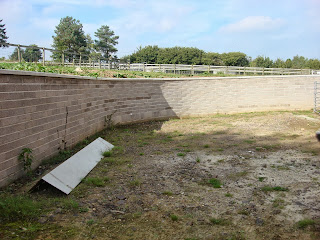 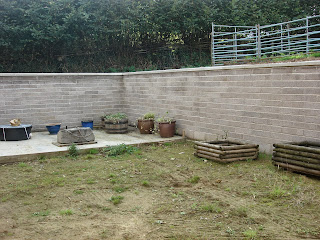 Since moving into the house we have rarely ventured into the sunken garden - pictured above.  Mike suggested recently that it would be good to have a patio area at the front of the house which faces our lovely view, so we thought it would be an idea to turn the back garden into a walled vegetable and fruit garden.
We cannot put containers out front because the area is constantly grazed by chicken-guarding alpacas, so they can be used on the small patio which we will retain as a sitting/reclining area and the wooden ones which Mike made will make ideal areas for "bringing on" plants.  Well that is my plan anyway!!  In the meantime we will still make our weekly trek to town or the farm shop.

This was mainly brought on by some statistics I read in a book about a small farm.   The constant demand for lots of cheap food means that even potatoes are treated with a minimum of about six sprays of various sorts.  This obviously applies to most of our store-bought fruit and vegetables.  I was also horrified to find out that ham, for example, can be a year old by the time it reaches the supermarket shelves but when you open the packet it is considered "fresh".   Obviously there are complicated storage and preservation issues and the meat is probably perfectly safe.  I know this is old hat and we all really knew it was going on, but at least now we have downsized the alpaca herd there will be more time to experiment with other aspects of the smallholding. 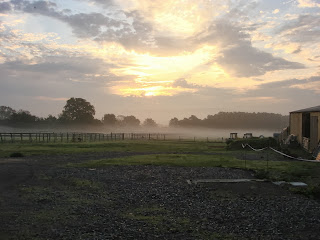 Who says we don't get up early!!   This was a recent stunning sky early in the morning.  Worth taking the time to stop and stare.

Dolly (dog) is brilliant and helping put the chickens to bed and  herding alpacas but she seems to be having some problems lately.   Two of the alpacas (both black) one female and one male have decided to stand up to her and it is only when I walk towards them that they back off and allow Dolly to move them on.   I realised that I may have been asking her to run before she can walk.   She will run ahead a long way but tends to run round the herd instead of getting behind and moving them forward.

I think I have assumed that because she will go a long way ahead, she knows what to do.  I have gone back to basics and will work with her close to the herd and gradually back off once she is back on track with what I want her to do.  I suspected also that if the sheep were separated from the alpacas she would not know what to do, so I set up a pen in the race and used it to send her Bye and away round the sheep who were contained within the pen.  This was fine but once the sheep were let out again after our training session she was quite nervous of them.  I made her lie down in front of the sheep once the pen was open and she was obviously not happy but she held her ground and did not move until I released her.

Once we got them moving off towards their field, she ran behind them more confidently.  She is a quick learner and as well as the normal whistle to come to me, she will drop into the down position on the whistle.  Next step is to get her going left and right to the whistle and then hopefully when she is a long way away she will still understand that I am asking her to do.  That and a bit of confidence building should do the trick.  Whatever the outcome, she is a lovely dog to work with and she can never have enough work (she says)!
Posted by Geraldine at Monday, September 30, 2013