Mike and Nick have been really busy today.

They have been clearing the ditch which runs down the side of our property and which drains surface water from the main road.   When they got to the old goat shelter, which later became Alario's shelter and was made out of an old pig ark with a wooden porch, they had to take it down to allow access with the digger.

It took several trips backwards and forwards but it is now in the barn being revamped into a garden shed for our sunken garden.  It is quite low and so will not be seen over the retaining wall.  I was surprised that I could not find any photos of it, but I suppose it was not the most attractive shelter so I probably left it out when possible.  It is just visible behind these young males who are now yearlings!! 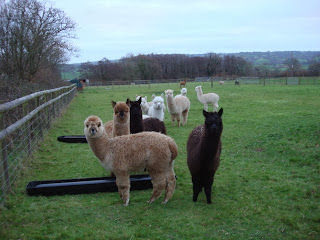 My pet hen, Chicken Licken, is looking very poorly.   She does not always get up on the perch to roost at night, although she still pesters me for extra titbits.   I will be surprised if she survives this winter. 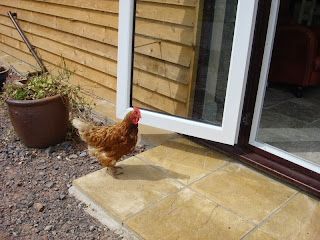 This is a photo of her when she was in her prime!!

My first customer this morning in the farm shop asked if he could pay by card and I admitted that he could but that he would be the first person to experience it as the machine had only just arrived.  He was lovely and the transaction went smoothly.   When the second customer arrived I felt much more confident and simply acted as though we had always taken cards.   It is not that it is a new thing for me, but just a really long time since I used one.  Really it would be hard to go wrong because the screen tells you exactly what to do but anxiety is a normal state for me.