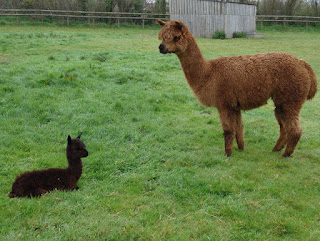 We have been bringing the pregnant females into the barn during the recent bad weather following the loss of a cria due to hypothermia ( we think) when her mother gave birth really early in the morning in a bad rain storm.   Some days they have been kept in all day but mainly just at night.

With a better weather forecast we have left them out over night for the last couple of days as they really do not like being kept in and also there is the risk of pneumonia with animals housed for too long in damp conditions.   When I went to check on them first thing this morning I had a nice surprise.   Aemelia, a really lovely young alpaca had given birth to her first cria, Regan.   Once again the birth must have been really early in the morning because the afterbirth had already come down and the cria was suckling nicely.

In the past most births have been sometime between 9 a.m. and 3 or 4 p.m. but this seems to have changed this year.   Maybe it is something to do with the weather or just coincidence.

The kids are all really well grown now.   Tilly the Kid, as we call the bottle fed kid, has really caught up with the others after a shaky start and the other female kid who would not take a bottle but was being rejected by her Mum in favour of her twin brother, seems to have perfected her milk banditing  and is also doing well.

Adrian Campbell, a reporter from BBC Spotlight,  phoned yesterday and arranged to come and find out about alpacas this morning.  The were here for about an hour and a half doing a piece in connection with the Devon County Show.  If it goes out at all it will be at the time of the show which starts 17th May.  They really fell in love with the alpacas and the goats so I hope they got some usable material.  If not, it was still a fun experience and something to add to my CV as they say.