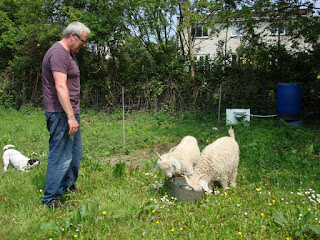 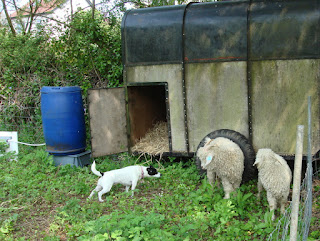 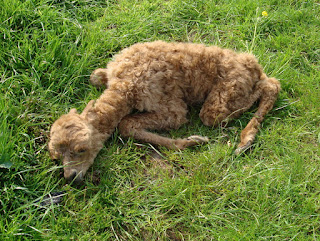 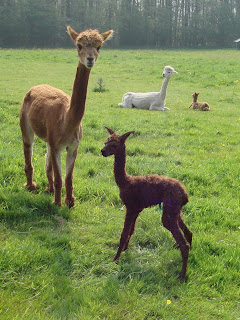 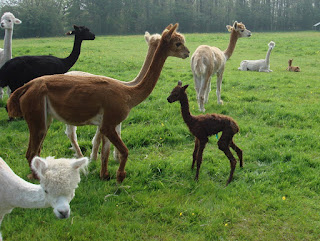 Two of the buck kids have gone to a new home this week.    One is our very first goat kid and the other is number 10.    Steve, who lives in Chardstock,  which is our parish even though we are in Tytherleigh, wanted some help keeping a small paddock down.  He is also going to get a couple of sheep so the boys will have plenty of company.  We took them over in the horse box and had to park a little way down the road.   The magic food bucket was produced and they just trotted behind me up the road and into the paddock and the small enclosure that they are going to be in to start with.  As you can see from the photos they were not phased at all.  I think the third buck kid who was living with them is feeling their loss a little and he is the only littly in with the big bucks now. 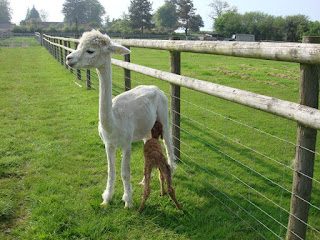 We had a slightly premature birth yesterday with a pretty mid brown male cria born to Katharina, a white female.   We wanted to get back to having more coloured alpacas again and so covered several of the whites with fawn and brown males.  It seems to be working because so far out of six births we have only had one white, and she had a white sire too, so not surprising.  He started off being rather floppy and we were a little concerned but thanks to some glucose booster, lovely sunshine and a good Mum he seems to be doing well now.    This morning we had the first cria sired by Anchor, a new stud male we bought last year.    Another female and a lovely dark brown.    She had already arrived when I sent to check on the potential Mums and again, because of the lovely warm weather she dried off without needing to be rubbed with a towel and was very soon on her feet and suckling.
Posted by Geraldine at Friday, May 25, 2012