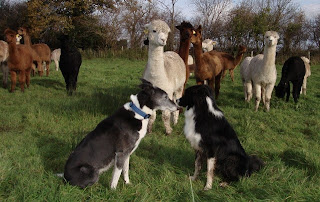 Today we delivered the last of our young males to their new home.

Isidro and Iago are this year's weanlings and so are still quite small and instead of taking them in the horse box we took them in the back of the truck. They were very cosy with a bale of hay and plenty of straw. We had to lift them in but once they were settled they soon went into the kush. They stood up from time to time on the journey but seemed very laid back about the whole thing.

We had a three hour journey to a school in Tooting which has started a small farm. Driving through Tootingh High Street we began to doubt if it was possible that there was any green land anywhere near. We had not visited them prior to delivery because of the distance involved but had their assurances that they already had pigs and sheep, a farm vet and had been inspected by Animal Welfare officers.


When we arrived at our destination we were shown round the farm which consisted of about an acre of ground but with grazing on the playing field when it was not being used for sport. The animal housing was all newly built and lovely and clean and well cared for. The stable which was to be the boys' night shelter was equally immaculate.

We have been handling the weanlings on a regular basis and putting a halter on the two boys but with so much rain we had not got as far as actually getting them walking around so it was a bit disconcerting when we found that we could not drive into a catch pen or a yard to unload the them, so we walked them on their halters for the first time. They were a bit reluctant to start with but amazingly they allowed us to take them all the way to the stables along quite along path, up and over a bank and down into their living quarters with very little resistance. Little stars.

I had seen City Farms on TV but this was my first experience of one in real life. There is a full time farm manager with two other designated staff members and it is manned all day with evening security visits too. The animals probably get a lot more attention than ours!!
In addition to the pigs, sheep and alpacas (two of each) they also have an aviary, a couple of dogs, and about ten hens.

Apparently the pigs and sheep and the alpacas will be going for walks on Tooting Common once they are all leadable.

We stayed just long enough to get the boys settled in and then had to get home in time to put the hens to bed to avoid another meeting with Mr.Fox. Luckily the torrential rain we experienced on the outward journey had cleared and we had a pleasant sunny drive home. The extra light skies meant that we had time to check the herd, walk the dogs, feed the alpacas who are in the barn and still get the hens to bed on time.
Posted by Geraldine at Monday, November 30, 2009