It's a cat's life 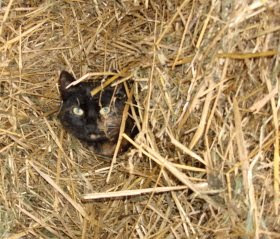 No wonder we don't know where the cat is half the time. Mike was moving the small trailer we use for taking hay around to the paddocks when he noticed something dark. The dark patch gradually grew ears and eyes and emerged as part of our cat, Polly. She certainly knows how to look after herself and keep warm.

Yesterday I went to a Goat Farm Walk at Forde Grange which is only a couple of miles away. I received the invititation from our vet practice who were in attendance. It was really aimed at people interested in goats for milking but I thought it might be worth attending in view of our intention to get some Angora Goats (for fleece). I did not expect to see anyone I knew but on arrival Tessa, Alison and Emma from Coombefield (our Vets) smiled and waved me to join them. Tessa was there to do a short presentation on the health issues. They have nearly 2000 goats all housed indoors. Although quite tightly packed they all looked nice and clean and did not appear stressed, not like the treatment that battery hens have. I am pretty sure that if they were unhappy their milk yield would be adversely effected.

After Tessa's talk was pretty worried about all the possible things that could go wrong, but as she confirmed afterwards, our five or six goats are not really likely to have much in the way of health problems compared with 2000!!

Lunch was goatburgers and muffins for pudding. I went to look at the milking parlour which is like a huge caroussel (if that is how you spell it). The goats wander on and stand still whilst feeding and being milked. Apparently it takes about 8 seconds per goat. I am not sure if this is just the labour time or if it includes milking. I should't think it includes milking as their udders would be sucked inside out if it was done that quickly wouldn't they?

We have been experiencing really high winds here. Whilst it is quite unpleasant in some ways, it is drying out the ground very quickly.

Our Christmas rush seems to have started in the shop and on line. Mainly hats, socks and snoods, but it is surprising how it mounts up. I think the shop would do better if the weather improved a bit.

Posted by Geraldine at Thursday, November 19, 2009