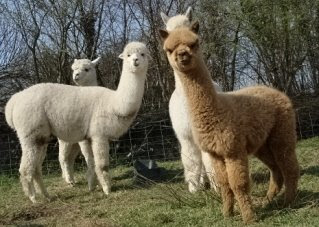 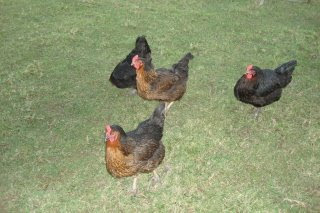 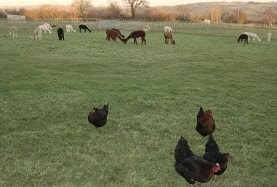 Hello if there is anyone out there still!!

I knew I had not made any blog entries for a while but was shocked to see it is well over a month since my last update.

Well we have several new additions to the Laurel Farm family. First of all we now have eight chickens. I have never really liked birds because they flap around and as a child I used to get chased by my uncle's geese. I have, however, always associated having chickens as part of farm life. The same uncle also had chickens on his farm and they were truly free range including frequest forays into the kitchen. Mike has always been against having them as he thinks they attract rats, but as I pointed out we already have animal feed around the place so a bit of layers' mash for chickens won't make much difference!!

Searching for a hen house was a major problem as most of them see to cost about £200 and there are few second had ones. Those that came up in the Free-ads either sold very quickly or were too far away. In the end Bob (who sells hay and straw to us) told us that he had seen some cheap sheds in Focus. Off we trotted and found a shed of just the right size reduced to £100.

Mike built a nesting box, fixed up perches and cut out a little door for them to go in and out of. he also added skids and made it as fox-proof as possible.

They are delightful and a great source of amusement. We thought that they were going off lay in November until we found a stash of 15 eggs in the hedge and only yesterday I found 8 eggs hiding behind the bales of straw in the barn.

Millie, one of our border collies, has developed yet another new talent on top of competing manically in agility, she is a brilliant alpaca dog and today she scented out eggs, picked them up without breaking them, and after a lot of persuasion gave them to me. I am hoping to build on this great new skill and teach her to help collect the eggs daily!! So far the retrieve is brilliant but the present needs some more work!!

Well, I'll teach Mike to worry about mice and rats!! The latest arrivals are two cute little kittens called Polly and Soukie. They are eight weeks old and are destined to be farm cats but their (accidental) breeder tells me they have to stay in the house for the first week so they do not run away. They started off in the porch but this proved to be inconvenient so now they are in a converted puppy pen in the living room. The dogs are fascinated and line up to watch their antics. We have had them out a few times and although we have not allowed them to run free with the dogs around yet, everyone seems to be behaving very well.

Back in September we took some of our yearling alpacas to the village street fair and we found out that a lot of people did not realise that we sold alpaca products or that they could come and visit the alpacas, so we advertised that we would be having open days every Tuesday and Thursday until Christmas. These have been very successful indeed. We have sold loads of wool and many of our hand knitted jumpers as well as the hats and clothes that we import from South America. Now there is rarely a day when we don't have a sale in the shop and we are also selling one or two items a day on the internet. A lot of this is obviously for Christmas but we are hoping to build on such a good start afterwards.

Tilly Tonkers, my lovely hairy lurcher who has been a great agility dog has been seriously ill this week. She was sick and then became very listless last week. She was diagnosed with kidney failure and her heart was EXTREMELY slow - only 20 beats a minute and irregular.

She was in vet hospital for 3 nights but came home on Friday and today she is looking quite good and back to eating, drinking and walking fairly normally. She is not out of the woods and she had more blood tests today. The feeling now is that the heart problem may have caused the kidney problem rather than the other way round. After the blood results we might be looking at scans etc: to find out what is wrong with her heart. Fingers crossed it will be something that can be controlled with medication.

I will try and be good and keep the blog more up to date. It would be a bit rash to say I will do it every day!! Some days there is not much worth reporting.