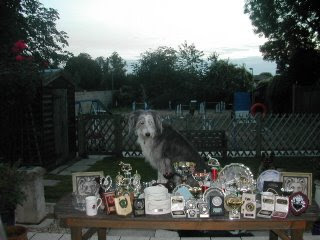 Today was almost totally taken up with taking Tilly to the Vet Hospital near Gloucester. Mark Paterson the heart specialist discussed the options for Tilly's treatment. Her heart beat is EXTREMELY erratic and although she seems to be coping very well at the moment he warned that she could suddenly drop dead. Still, couldn't we all?

They are still not certain what has caused this problem since she must have been perfectly OK last year when she was vaccinated as they do a health check at that time. Mark Paterson thought that a pace maker might be the answer which would cost £3-4K. Mike and I had already discussed this possibility and felt that as she is 13 years old the risks were too great against the potential benefit and the specialist agreed that at her time of life she had probably had 90% of it and the pacemaker would perhaps increase her projected life by a small percentage. Different if she was a 3 year old. He did, however, recommend some more blood tests and a heart scan, so I had to go away and kill about three hours, which I did in a local garden centre. Caught up with the Christmas shopping and had a snack lunch.

Back at the Vet Hospital Mark showed me her scan. There is a nodule between the atrium and ventricle which might be inhibiting what he described as "the wire" through. This might be the result of some sort of infection which may or may not be confirmed by the blood tests or worst case scenario it could be a tumour although that would be very rare.

In the meantime he has given her some medication to increase her heart rate. At least we now know the probable cause of the heart problem but not the cure. She might make a natural recovery or might need antibiotics to fight an infection and if the damage is not permanent she might get back to normal.

At the very least we know that a pace maker is not the answer - even if she was 3 years old.

So far it has cost over £1000 to get this far. Makes you appreciate BUPA or the NHS!!

Tomorrow I am going Christmas Shopping (that actually means a quick look at the shops followed by a leasurely lunch in a nice restaurant) with Pauline, my bestest friend. We decided years ago that it was pointless buying each other Christmas presents so we just have a girly day out together. Poor old Mike will be on his own again (I think he quite likes it really).

Still I am doing driving duties and delivering and collecting him from the Garage (his Salisbury business) Christmas do on Christmas Eve. A great sacrifice worth many girly lunches in my book!!
Posted by Geraldine at Tuesday, December 16, 2008

Labels: Tilly about five years ago with her trophies.