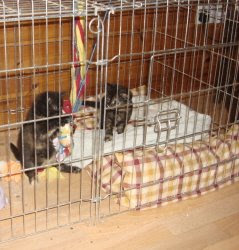 Today must have been one of the coldest of the winter so far. When I did my morning rounds with the dogs even the thickest and soggiest mud was set.

The alpacas looked very happy. It must be a real treat for them to have kept their pads reasonably dry for a change. Mike has put some new hay racks in the biggest shelter where the main herd goes at night and they had emptied both racks and were busy demolishing the hay in the mobile hayrack in the field. Looks like we'll have to order some more hay shortly.

We have been out all day today and got back just in time to put the hens to bed - or rather shut the door on their house, as they had already gone in. They are such obliging creatures!!

The kittens are starting to be assertive and began mewing almost as soon as we got home. I assumed correctly that they thought it was about time they were fed.

They spend most of their time in the puppy pen when the dogs are around but they treat the living room like the wall of death when they are let out to run around. They tightrope walk the chair rungs. Last night one of the ran at the gas fire, which, luckily is enclosed, bounced off it with one paw, and obviously found it rather hot!! She spent ages licking and looking amazed at her poorly foot. We inspected her front paws very carefully but could see no sign of permanent damage, so hopefully it is just a painful lesson learned.
Posted by Geraldine at Wednesday, December 10, 2008