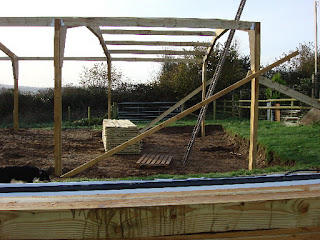 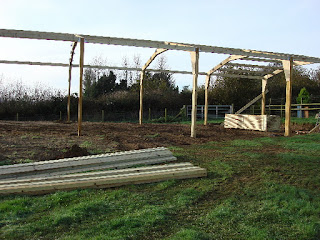 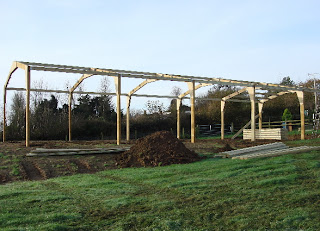 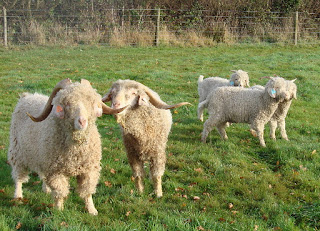 We decided to introduce Emperor and Drake a couple of days ago.   They circled each other to start with and this was followed with a prolonged session of head butting, including taking a run up to each other to give the headbut more force, mixed with hind leg balancing acts.  Luckily their horns grow backwards so there was no locking of horns.  After what seemed forever, they finally settled and it seems they have decided their pecking order.  I think Drake won, but it is hard to tell as they seem to be best buddies now.
The young bucks just ignored the whole thing - unlike young male alpacas who would have become very excited and probably started to tussle with each other.   Emperor is limping a little and I cannot find anything wrong with his feet so I am thinking he might have done a little damage when battling with Drake.  Perhaps when he was balancing on his hind legs dancing around like a boxer.  It does not seem to be getting any worse so we hope he will be sound in a day or two.  I am surprised they have not got headaches.   Maybe they have - it is hard to tell as I don't speak goat.

The barn builders returned on Monday and by the end of Tuesday they had erected the framework.   They have left to finish off another job but should be back next week to clad the outside and concrete the floor - or maybe they will disappear again for a while between cladding and concreting.   Mike is going to get Larry, who has done work  for us before, to build some blockwork internal walls so we can have the farm office, somewhere to make a cup of tea and a toilet in the new barn.  It seems quite big so there should be plenty of room for hay storage, feed and animal handling.   We will also use it at kidding so we can keep an eye on the does when they give birth and also to keep the kids warm so we don't have the issues we had this year with a couple of the kids becoming hyperthermic.

Dolly's sheepdog training is going well.   We have done a course of six lessons and with Christmas coming up followed by lambing, we will not be doing any more until the spring.  In the meantime I am hoping that we can build on what we have done so far.  All being well I shall probably be helping our instructor with lambing. She has 600 sheep (not sure how many pregnant ewes) so it will be a good experience to give me confidence if I need to start rummaging in alpacas.  In my experience they rarely need help, so I  have not had to intervene very much.  I attended a lambing course a couple of years ago, but pulling a dead lamb out of an old oil drum does not compare with the real thing.

The chickens don't seem to be laying at all at the moment.   We think they must have a stash somewhere as most of them look healthy and it seem unlikely that none of the eight  are producing.   We will probably buy some more point of lay hens shortly.   I actually had to buy eggs this week for the first time in years.

We will be opening the farm shop on Fridays, Saturdays, Sundays and Mondays (afternoons)from now until Christmas and bringing up the alpaca cria as an added attraction.  We have also bought a small loom which will be arriving shortly.   The last batch of wool which we had spun did not live up to expections but should make nice soft throws.   Mike says he would be quite interested in trying weaving.  Something to do in the long winter evenings.  Watch this space, but don't hold your breath.
Posted by Geraldine at Thursday, November 24, 2011