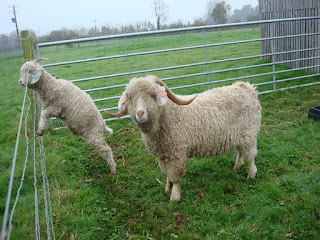 Emperor is our latest aquisition.  He is an awesome addition to our little goat herd.  As you can see he has a lovely long straight back, a really handsome face, well proportioned limbs and (as you cannot see) an excellent temperament.    He is in quarantine at the moment and has a little whethered kid as company.   The kid is also in quarantine until Emperor's thirty days are up.  They are the best of friends and Andy (the kid) is actually looking at  one of our dogs,not trying to escape!!

We have had a nasty shock with 7 and 9, one of her half brothers.   Both were scouring badly and I medicated them for coccidia and took  faecal samples to the vet to see if there was any other cause for the problem.   We were particularly concerned for 7 who has probably had her immune system compromised by her recent illness.   She has recovered from the swelling but seemed to be going downhill again.

The samples went in on Friday but I was concerned when I had not received the results by Tuesday morning, especially as both kids seemed to be detiorating and 7 kept falling down and could not get up again.  I phoned up and expressed my concerns quite forceably.  Tessa phoned me back and I  was horrified to hear that 9 had a Faecal Egg Count of 5000 and 7 had 1000.  No wonder they were going down hill.

We had wormed all the goats at the end of June and took a 20% sample from individual members of the herd  in late September which was reported to be completely clear so we did  not worm at that time.   Somehow in less than two months the egg count has gone up from zero to the above.  Seems unlikely, although the weather has been very mild.  More likely there was something wrong with the samples or with the testing.

Needless to say all goats have now been wormed and after a couple of days of being under par, both 7 and 9 seem to be perking up.

I spent the weekend at Earls Court helping Pauline on the APDT stand at Discover Dogs.  Seems that dogs still need their new toys, beds, equipment and bling despite the economic problems of the country.  As usual I went intending to spend nothing but soon found some must have items, such as an additive of seaweed which breaks down plaque on their teeth.   Sandy has awful teeth but she will be 18 in April - more worrying is that Romie  (6)has always had plaque which bones and teeth cleaning keep at bay but never get rid of it totally.  I also bought new nail clippers, a year's supply of wormer for dogs, 5 balls on a rope which were only £1 each but could not buy the pink head collar that I wanted for Dolly because luckily the colour was out of stock in her size.

We have two females alpacas who have skin problems which we have never been able to clear.   They breed every year and their cria do not seem to have inherited the condition.   They have been treated with everything under the sun over the past few years.  We are now trying zinc added to some alpaca nuts each day in the hope that it may be a zinc responsive condition.

Bad weather is holding up the start on the new barn.  If it is fine on Friday we are expecting the builder to come and lay concrete pads for the main supports, which will be good.  Once the concrete has set they should be able to proceed with the erection.
Posted by Geraldine at Monday, November 14, 2011