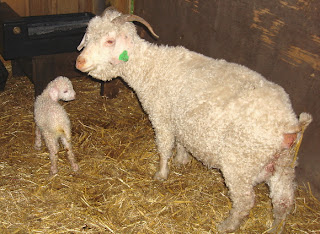 The first kid of 2011 arrived about half an hour after I left to visit my friend,Elaine, for a girly afternnon.  Mike, of course, dealt very capably with the event and as he could not get hold of me on my mobile for some reason (no record of missed calls at all on my phone) I did not even know she had been born until I arrived home at tea time.  Mother and baby are doing well and we are hoping that the other does will give birth shortly.  Mike hopes to be off duty when they do!!

I took Romie and Charlie to Elaine's and after a lovely walk over open farmland we did some agility practice in the field where they have their equipment.   I was really pleased with Charlie as despite being very excited he did some good agility and more importantly he came back every time when he was called.  Last year he would not have dreamt of coming back if there were other dogs running around who could be potential playmates.

Chale, one of our white stud males has been scouring and so yesterday we drenched him with Pro Rumen which is a complementary feeding stuff used to assist in the establishment of bacteria in the rumen and we also gave him a long acting anti-biotic.   Last time we used the pro rumen, Nick was here and as we did not have a suitable container available to drench the animal, he said we could use a wine bottle!!  Of course it was highly unlikely that I could find an empty wine bottle but after an extensive search which took nearly a minute, I was able to produce one.   I was worried that the glass might break but apparently it is an old fashioned way of doing it and he has always found it to work safely.   We tried the same method on Chale with equal success.   By this morning there was no sign of scouring in the paddock so either the anti biotic or the Pro Rumen or a combination must have done some good.   We will give him another drench tomorrow just to make sure.

Last week I trimmed the weanlings top knots but noticed afterwards that Pablo, Pepe, Tanya and Miranda were still a bit over fleeced around the eyes, Pablo especially.  After treating Chale this morning, we took the scissors to the weanlings and they look much better and more to the point they can see better.  I used the hand shears before which were less easy to control.  I am hoping that being able to see what is going on will take some of the trauma out of walking with a halter for Pablo.

We are up 11 eggs a day now which means that 50% of the hens are now laying and they should start paying for themselves again.  Even when they are not cost effective it is lovely having them around- makes it seem like a good old fashioned farmyard!
Posted by Geraldine at Monday, March 14, 2011