We have had a  busy few days.     I took Dolly for her sheep dog try out on Saturday, which was a bit disappointing in a way.   I did not learn anything that Nick had not already told me, but I was pleased that she ignored all the other dogs except one that came to say hello to me.    The test was to go round and round a pen of sheep.  Dolly took to it straight away as it is what she does most days to the alpacas.   She also changed direction and went the other way round  and dropped on command.  I had wondered if she would behave differently with sheep but apparently if it has 4 legs, herd it, is her motto.  I think I can probably teach her to do what I want her to do now, as I don't need her to be a super sheep dog - just to move on a bit so she will fetch the alpacas to me.

I phoned Mike to say I was on the way home and he told me that he had been on his way to put the goats in when he found 2 kids on the ground.  They were very cold and he was quickly setting up a pen and heat lamp to try and keep them alive.    We had let the expectant goats out to get some exercise and enjoy the sunshine and he had been checking on them regularly but once the sun started to go down it got cold very quickly and they chose that time to arrive!!   When I got home they were still alive but not as they should be and they had not suckled.   I felt that I should give them some colostrum but they were so tiny compared to alpaca cria that I was worried about tube feeding them so I phoned Nick and, bless him, he came over to take a look at them.  I had already checked that the doe had milk and found that only one udder was producing.

He did not think they would make it but showed me a way of tube feeding that I will certainly use again if I have to.   Instead of using the tube with a colostrum feeder he inserted the tube and used a syringe to put the colustrum in in small amounts.   By checking the tube during the feeding I could see when it had gone down which reduces the risk of choking the kid.

Mike had made a cosy pen by hanging old curtains and blankets round the pen and put out heat lamp in the corner.   I tube fed the kids again during the evening and got up a couple of times in the night to feed and check on them and we were relieved that they got through the night.  Next morning Mike got some goat milk from the supermarket and I continued to bottle feed the kid which was getting less of its mother's milk.  I have been topping her up ever since, but luckily at least she is suckling from her Mum as well so is getting some of her Mother's immunity.

Realising that I would need more goat milk and that we could not milk any of the other does as only one had kidded by then, I phoned Forde Abbey Goat Farm and they kindly agreed to sell me some fresh milk off the farm.  I got 5 litres which I have frozen to use as and when.   Both kids seem to be feeding from their mother now but I am still topping up the weaker one.

On Tuesday Nick went up to feed the goats and found that another doe had given birth to a female kid and yet another had given birth to one kid and  was trying to give birth to another but it had its leg back.  Nick  got the second leg out and delivered the kid, but its mother rejected it and would only feed the first one- presumably because the second one was so late that she did not realise it was hers.  We tried throughout the day to get her to bond with the kid  and it looked like another bottle feeding job.  The only way she would feed it was if we held her.  Before Nick went we took the kids and Mum down to the barn and set up another heat lamp.   The trip from the goathouse to the barn seemed to traumatise the doe but it also made her recognise the kid as hers and both kids fed normally from then on.   Strange!!

We now have six kids in all with one doe still to go.  Four female and 2 male.

The male alpaca weanlings were starting to get feisty with each other and we think it was probably because the female weanlings are getting older and reaching sexual maturity so we have separated them into two paddocks which seems to have settled them down again.  They are only next door to each other so it is not too bad for them. 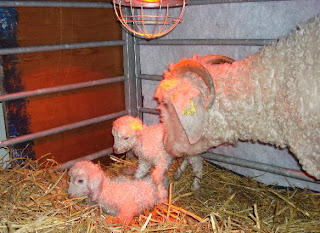 We are getting a dozen eggs a day now which means that we have a surplus to sell again, which is nice.
Posted by Geraldine at Wednesday, March 23, 2011