New Life on the Farm 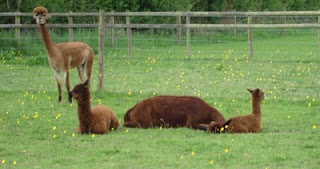 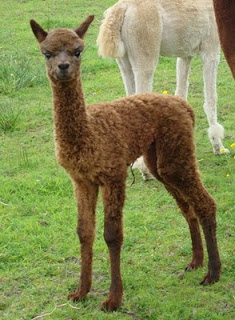 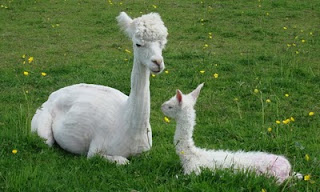 We now have 4 new babies 2 girls and 2 boys.  Bad timing - we had sold two of the Mums just prior to the births so the cria go free!!  Still they are going to a good home with a lovely lady.

Romie has made a rapid recovery from her operation and apart from a big shaven patch on her neck where they repaired a wound probably from her rummaging in the hedges, she looks almost back to normal.  She is looking a bit thin but I think that is mostly because she has lost some of her coat.

Bono had yet another visit from another vet and we have now decided that the "bloat" might be helped if he is given just hay and taken off the richer grass, so we have confined him to a patch of poor grass, mainly bare earth, and given him just a hay net and some water in the hope that the restricted diet will get his gut working properly.  Jenny, the vet, said that his gut is working too fast.  You could actually see waves of movement on the outside and she listened with her stethascope and timed the turnover.   She is hoping that a simple poor
diet for a while might settle him down.  We have made a pen near his friends so he does not get stressed by being alone.  We don't want to bring back his original condition.

It has been really hot here today.   Lots of alpacas have spent the day sunbathing on their sides and when Calpurnia gave birth this morning she just did it where she was lying.   She is always a lazy birther but she has now got it down to a fine art.

Mike cleared the barn out once again on the assumption that the weather will be good enough from now on for newborns to stay in the paddocks.   If, heaven forbid, we have any sicklies, we can quickly move out the vehicles and put some more straw down. 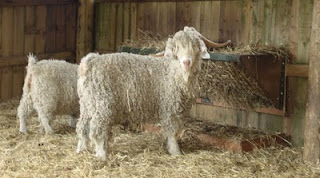 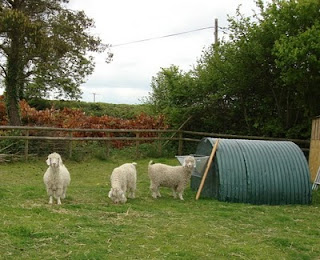 Mike has finished sorting the goat pen out ready for kidding.   Drake, the buck, now has his own quarters in a converted pig arc with a small paddock.   This is to stop him harming newborn kids and from now on he will probably have to live either on his own or with other males because apparently the female goats reach sexual maturity quite early and we do not want him to comit incest with his own daughters.
Posted by Geraldine at Friday, May 21, 2010