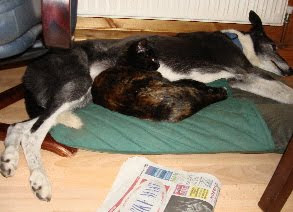 Nick came this morning and helped me trim the goats' fringes. A couple of them looked as though they couldn't see at all and as with alpacas, we thought that being unable to see would make them more easily spooked. They were quite easy to handle although we took the precaution of putting the buck outside the goat house whilst we operated on his does. Luckily his fringe did not need any attention.

According to Nick we might have left it too late to mate them - we were delayed in preparing their quarters because of the unending rain - but we are keeping our fingers crossed that they will come into season in a day or two. Apparently they will start "calling" for the male when they want his attentions. At least they will see him coming (approaching)now.

Maddy, our lurcher, has always been fascinated by the cat but we have never been quite sure if she looked on her as prey or a potential friend. Judging by today's photo, she has decided they are just good friends.