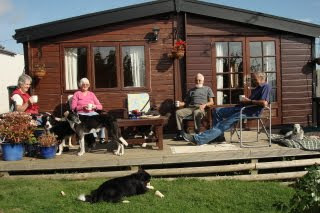 Well, as my friend Pauline reminded me, I am behind with the blog. This is a quick update, not necessarily in chronological order.

The picture is of Mike, Rich and Dee, and our neighbour, Pam relaxing in the garden after cleaning the paddocks. We were very lucky with the weather.

Colin, the shearer , sheared some of our cria who are likely to be good enough to show next year. They were not too worried by their experience but their Mums rejected them after they had been shorn. They probably smelt of the shearing oil and looked very different too. After a few hours all but one of the Mums had accepted her off spring again. For a few days we caught and held Ariel (the one who would not feed her cria), but it was stressful for all concerned and so we decided to wean the cria who was very fit and healthy at four months.

Nick, our contract helper, suggested that they should all be weaned at 4 months as in most other farm animals the young are weaned at three months. We decided to go ahead with this plan and although they are still not very happy the cria seem to be feeding well. In the past we have taken the Mums away from the cria but Nick felt it was better to leave the cria in a paddock they were familiar with and then put the Mums on to less rich pasture for a few days to encourage their milk to dry up. This we did. In a few days time they will go back with the rest of the herd. We will do condition checks on a regular basis. If it works well we will probably do this next year too, as it gives the Mum's more chance to build themselves up ready for next year's birth.

Our young black male yearling, who has been sold, presented with a very nasty wound in his ear. We are guessing that one of the other males was involved in a fight with him. We checked for fighting teeth and found two had teeth that had come through, Ben, the wether and Bono, the Stud male. Colin examined them both and decided that Ben's would not need filing off until shearing time next year, but he said that Bono's were "massive" and he was probably responsible for Alvaro's injury. We had a struggle with him - Colin held his neck and stuffed a towel in his mouth and filed off the offending teeth, whilst I knelt on the back end. Bono quickly jumped up when he was done and was back to normal almost immediately.

Alvaro's ear became infected and we had to wash it out and spray it and we also gave him an antibiotic injection.

The new chickens are settling in well, although they still don't mix much with the originals.

Egg hunting is still adding mystery to our lives. I found eight in a shelter this afternoon and there is a hen sitting in the back of the landrover who I hope is busy laying an egg. There are probably a few in there.

We helped at Honiton Show at the weekend. Mike was under the weather - we think due to King Prawns in our Chinese Takeaway. I did not eat them and I was fine. Romie came 5th in the Grade 1 - 7 Steeplechase on the Saturday and won Grade 4 Agility on the Sunday.

I have just been to see a farm collie who is looking for a home. She is quite nice, although a little stubby. She is about Millie's size and does not seem to have had any training at all, although she likes to chase a ball. Her owner died at age 45 and she is in a foster home at the moment. She is going to meet our dogs next week sometime and we will see how we get on.

Romie has not come into season yet, but I am hoping she will soon, so she can become a single mum.

Mike is working at the garage today and Pam and I are going to a Jamie Oliver party this evening - I think it is like a Tupperware party but more classy and probably more expensive.

When Nick was here on Tuesday we scanned all the potentially pregnant females and most of them showed a positive result. I felt much more confident about doing it this time and more sure of the results.