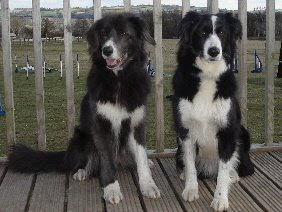 I went to a dog competition near Preston at the weekend and was really pleased that out of two runs per dog my two little stars had a fifth and a second place. This was our first show of the season and last year I just could not get it together and did not get any clear rounds or places until well into the year. Millie, the brown collie, had a fifth place and would have done a lot better if I had not had a huge hesitation. I should think we lost a couple of seconds at least which considering the timing goes in 100th of seconds could make a lot of difference. With Romie there was a small hesitation at the end of the run which probably cost us the first place, but at least we have started with some clear rounds. Romie's problem has been knocking poles down so any clear round is a bonus with her.

All animals and humans doing well. Mother was looking a lot brighter today but seemed less able to speak. I left a letter for her consultant asking her to be transferred to a hospital nearer home as soon as she is up to it.

We had our first double yolked egg today. The master of the house had it for his breakfast.

Kittens are still ruling the roost.

I took some photos of the pashminas and scarves that we had made in Chile and David put them on the Alpaca-stuff website. When we went to Chile to select our alpacas one of the Indian farmers sold us some pashminas and hats. His wife made them and they were beautiful so we asked her to make some especially for us. We have been selling them at fairs and in our shop but have only just put them on the web.