The alpacas were shorn in May and ever since I have been meaning to sort the fleece.  I am now running out of time to get it to the spinner who will be buying it.  Later on I will be able to buy back wool.  Why not wait until we have a heat wave?

At least it is done now and later in the week we will deliver the goat fleece to the collecting point and the alpaca fleece to the mill.

I sort it by colour and remove as much vegetation as possible.   When the animals are grazing or in the barn lying on straw some of it inevitably gets into their fleece.  This has to be removed so that the final product does not have bits of hay, bramble, or any other unwanted material.

At the same time I discard any fleece which does not feel good enough to be processed. Garbage in Garbage out as the saying goes.  Since we usually sell off our older alpacas and keep the younger generations on the farm, the fleece tends to have a soft handle (feels soft).  The fleece becomes courser as the alpacas age.

The best fleece is called baby fleece for obvious reasons.  Unfortunately the fineness which is the wonderful part also makes it very difficult to keep clean.  Bits of hay get lodged amongst the very fine fibres.  It breaks my heart sometimes when I have a beautiful baby fleece but have to reject it because it is impossible to clean.  We usually try and keep the alpacas away from hay and straw as much as possible in the lead up to shearing but sometimes it is impossible, particularly if the weather is bad. 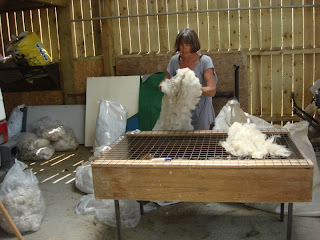 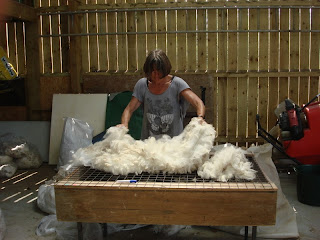 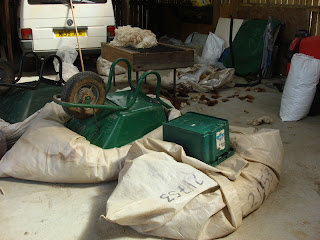 Once the fleece is sorted into bags it has to be protected from unwanted guests - namely the free range chickens who like nothing better than to romp in a fresh bale of hay or a bag of alpaca fleece!  Hence the bags are weighted down with anything that comes to hand until they are weighed and finally sealed.  In this case wheelbarrows and an old box were the nearest suitable items.
Posted by Geraldine at Monday, July 22, 2013