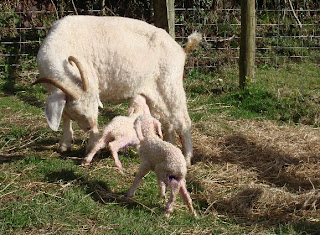 The first kids of 2012 were born today.   Luckily it was quite warm and sunny for March.

The oldest Doe in the herd gave birth to twin bucks at about 10 a.m.this morning.  We were quite surprised when she became pregnant as she has lost all her teeth and is a bit past her sell by date.  Then we hoped that she would have only one kid as last year only one side and teat was working and I had to bottle feed one of her kids.  Both kids were trying to feed from one teat and one was definitely getting the upper hand.   I suddenly remembered my hairdressing appointment and so left Nick (he was here, being a Tuesday) to give the twins some colostrum in case they were not getting enough from the old girl.

When I got back we were all concerned about  the situation and I was afraid I was in for another long stretch of bottle feeding.   Then at  about 2.30 I went up to the goat paddock and had a count up and found there was one missing.  I found her in the goathouse with a very recently born kid.  He was quite big so I guessed he was a singleton.  Nick and I decided to try and get the second twin adopted by the new Mum.

Look away now if you are squeamish!  We fetched the twin and rubbed some of the liquid from the birth over him and then wrapped some of the membrane which had covered  the singleton over him.  Nick tied his feet together so he would not run away but would have to stay by his new Mum and be licked as part of the bonding process.   He slipped his legs out of the loops, but luckily, the singleton lay down on top of him and Nick was able to rub them together to make them smell the same.  Then - and this is really gross - the after birth  started to come away from the Doe and there was a sack of  bodily fluids.  I held the doe whilst Nick put the twin under her and burst the sack so that the liquid immersed him.  Very soon Mum started to nuzzle the twin and her own kid and to lick them.  In fact she acted completely as though they both belonged to her.

A textbook adoption, according to Nick.   I will be up a few times in the night to check up on them, but fingers crossed all should go well now, although we do have some concerns about the singleton.  He still seems very unsteady on his feet, but he is rather big and long legged so maybe he will grow into himself.

Our  grass seed was delivered this afternoon as we plan to reseed about half of the grazing paddocks.   I hope that I have ordered the right mix.   It contains some deep rooted varieties which should help to pull up minerals from the soil to enhance the alpacas diet.  I checked with my alpaca bible but the nutrition chapter was extremely complicated, although very interesting.
Posted by Geraldine at Tuesday, March 06, 2012