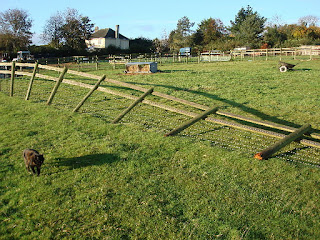 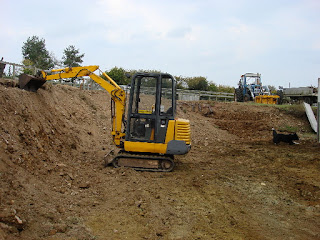 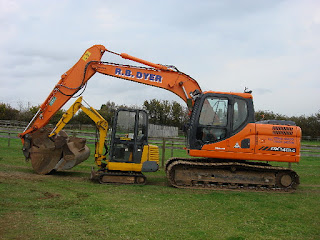 Last night was very windy and wet and although we did not notice it at first,  one of the fences dividing the paddocks had actually blown down.  16 out of 20 posts in that line had rotted at ground level.  Mike and Nick had to abandon their plans for the day and set to demolishing the remaining fence and clearing away the wire to make the area safe for the grazing alpacas.
We were particularly upset because when we first cleared the farm we paid out thousands for supposedly good quality fencing which you would expect to last.   Apparently around the time we had our fencing done there was a problem with the tanalising (preservative) of much of the fencing timber supplied.   There have been reports of problems in Farmers Weekly, even, according to Nick.
We are not alone and I have found out that several other alpaca breeders are having similar problems.   Now Mike will have to check all the fencing and put in extra supports to any posts which are suspect.   Not only that but the post holding up the farm gate has rotted and the wind pushed both the fence and the gate out of place.    They have replaced the gate temporarily with a spare steel gate.  Eventually they will fit a new wooden gate.
Mike skillfully fitted his mini digger under the full size digger which was used to do the ground works for the new barn.    He thought it would make a good photo and he was right!!
The other photo is of the mini digger in the hole behind the existing barn where they excavated earth to level the site for the new barn.   At first it was a big shock but we quickly saw lots of possibilities for it.   In effect we have been given a lovely big flat area surrounded by high sides giving complete privacy.   ﻿Mike is going to shore up the sides with railway sleepers which should give the area a pleasant rustic appearance and it can become a sunken garden, patio, or something similar.
﻿
Posted by Geraldine at Tuesday, October 25, 2011