Yesterday we had all the female alpacas in a catch pen while we condition checked them when we noticed that Bourree, a big black female from our original herd, started to look very uncomfortable, lay on the ground groaning and generally showing signs that she was about to give birth.   We gently shooed her into the nearest paddock so she could give birth in a less stressful situation.

About twenty minutes later Don Santos appeared.   He arrived with his feet over his head but we have often seen perfectly good births resulting from this presentation so we did not interfere and sure enough he popped out and Mike prepared to fend off Bourree, his mother who is renowned for her defence of her offspring - even when they are grown up. 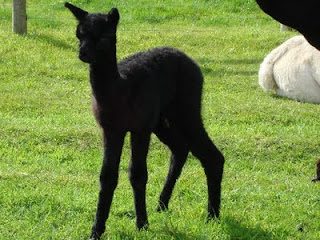 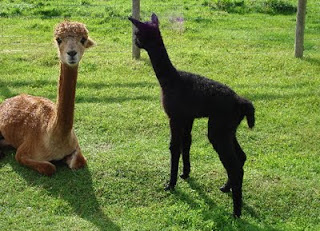 She has obviously mellowed with age because apart from clucking which is a noise that Mums use to communicate with their cria-presumably saying I am here for you, and working up a potential spit, she was quite easy to keep away whilst I quickly dried him off and applied iodine to his umbilicus thus preventing infection through the remains of the cord.  I noticed that he was snuffling and not breathing very well so I turned him upside down which was not successful, I checked that his airway was clear and as a last resort tickled his nostrils with a piece of grass.  This provoked something between a cough and a sneeze and the snuffles seemed to clear up, so fingers crossed it did the trick.  He now seems to be running around and full of beans and as you can see from the pictures he is at least as nice as Santiago,the boy who was born on Sunday and his fleece seems to be more organised but I have not so far felt it was fair to upset Bourree by taking him away to examine.
Posted by Geraldine at Tuesday, June 07, 2011