The Vet recommended a suitable wormer to fight the parasites identified from dung samples and we have now dosed the bucks, sheep, male and female alpacas, so they should be fine now, although I will probably take a percentage sample for testing in a couple of weeks just to make sure the treatment was successful.
The three alpacas who act as chicken guards and lawnmowers in the house area did not appear to have any worms according the test results but we have decided that it would be a good idea to give them a prophylactic dose anyway.

They were all very good apart from Perdita.  You might remember she was the female who managed to clear fences over three paddocks to get back to her Mum when they were separated.   She decided she did not want to be wormed and reared up and ended up on her back.  Luckily we managed to hold on to her and she did not learn that way to escape.  It came as a complete surprise because we have often cut her toe nails and carried out other husbandry without such a reaction.  The picture below was taken earlier in the year.

I will make sure that she gets more attention for a few weeks until she is calmer and, I hope, happier with being handled.

Since having our "Shop Alert" system set up I have been able to open the shop much more because I can get on with other jobs and only go up to the shop when the alert sound tells me that a car or pedestrian has entered the premises.   It also often tells me that a tractor is driving by and Mike thinks sometimes it reacts when someone is driving past using a mobile phone, but the odd false alarm is well worth the benefit of being available to customers.

On recommendation of my grand daughter I have added  hand knitted headbands to our range of knitware.  They are lovely and soft and today, the first day they have been on sale, a young woman purchased one, which looks like a good omen. 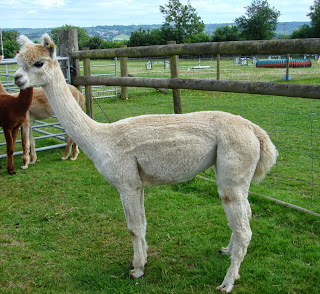