www.alpacas-for-sale.co.uk
www.alpaca-stuff.co.uk
Rachel, the vet, came on Tuesday to check the sickly cria.  I had already established that his temperature was the high end of normal and he seemed fit and healthy again, but I wanted her to listen to his chest and make sure it was absolutely clear, which she did.   I had been shutting the weanlings in their shelter at night in case the weather changed.  Now I can confidently let them all get back to normal and just go into the shelter if they feel like it.

We have moved all the females into the lower paddocks which has not been grazed much lately.  The males are in the home paddocks sharing with the male weanlings.

The chickens are all laying now so we have a good surplus to sell to friends and at the farm gate, so they are paying for their feed and keeping us in eggs.

We were hoping to have moved into the house by now but there have been some last minute hiccups, including trouble with the central heating system.   Annoyingly the plumber went away on holiday for two weeks before it was fully operational.  Not very impressed with him.

David, Jane and Zach came down today and helped us move some of our furniture into the house and David brought down a really useful stock trailer which is surplus to requirements for him as he has given up keeping sheep for the time being.

We spat off the three females who are due to give birth in April - i.e. Alario, one our of stud males was put in   with them one by one to see if they were amenable to being mated.  Their way of saying no thanks is to spit and  kick at the male or run away whilst doing both of the former.   Poor old Alario had a hard time and did not even have the reward he was hoping for.

We have separated them from the herd and are keeping them near the barn so that we can keep an eye on them as a newborn would not last 5 minutes in this raw weather if it was not kept warm.

Posted by Geraldine at Thursday, March 28, 2013 No comments:

www.alpacas-for-sale.co.uk
The little cria seems to be holding his own.   He was standing with the others when I checked this morning and was chomping hay which is a good sign. The sun was shining and only showers forecast so I let them out about half an hour later and he trotted alongside the others quite happily, although he could not keep up as well as usual.  When we were having our morning tea break the heavens opened and so we decided to bring all the male weanlings back into their shelter.   Grazing in the sunshine is  one thing but getting soaked and cold  is not a good idea when you are already poorly.

The building works have been going really well but there has been a bit of a hiccup with the plumbers!!  As well as forgetting that some improvements to the office loo were included in their quote, they had a mix up with the radiators leaving a very unsightly mess of pipes across the office wall,  and it seems, they got the hot and cold mixed up in the office and the utility room.   Mike was frustrated when he tried to wash the dog dishes because the water would not heat up. He feeds the dogs in the mornings whilst I clear up indoors.

I tried the kitchen tap and reported lovely piping hot water.  Then he ran the cold tap and found it was running hot.  It transpired that the wash basin in the loo had the same problem and the toilet was flushing with hot water!!  Needless to say the plumbers will be recalled on Monday.   It is quite funny really and Mike says that it is only one joint which needs to be turned round (or something like that).
Posted by Geraldine at Saturday, March 16, 2013 No comments:

The weather was kind this morning and we just about managed to get the basic jobs done including trimming some more alpaca toe nails before the rains came down.  It has been raining ever since.

I noticed that one of the male weanlings was lying down on his own when all his mates were at the other end of their paddock.   I checked a few times and he was still there and when two other alpacas were lying down near him I walked over.  They ran off as I would expect but he lay very still and it was really easy for me to get to him and put my arms about him.   He allowed me to steer him  into the shelter and seemed to be in pain, although I could not be sure if  it was his gut or what.

I knew he was in trouble  of some sort and after checking an hour later with no change,I called the vet.   Rachel came quite quickly but could not be sure what was causing the problem.   The most likely was pneumonia as he had a high temperature and she detected some breathing problem. She thought his gut seemed to be a bit sluggish on one side, so we are looking out for scouring.  He also has a high temperature.

She gave him anti-biotic and anti inflammatory injections and we are keeping fingers crossed they work..  It would not be surprising if he had pneumonia because the weather  has varied between freezing, blizzards, and rain recently. A couple of days ago we had one of the coldest March days on record with very sgtrong winds and terrific chill factor.

An hour after the injections he seemed a bit brighter and was standing up and eating hay which was encouraging.  Dolly and I brought all his friends into the shelter for the night so they will help to keep him warm.  If it is something catching they will have already got it, because they are together nearly all the time.
Posted by Geraldine at Friday, March 15, 2013 No comments: 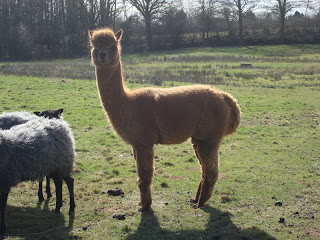 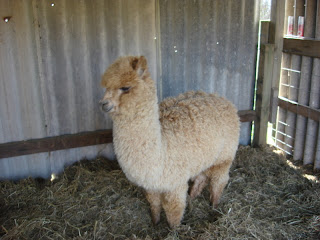 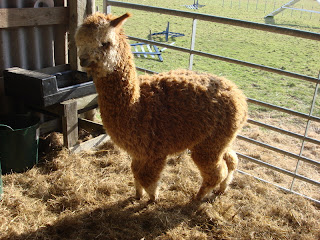 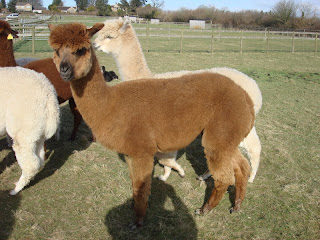 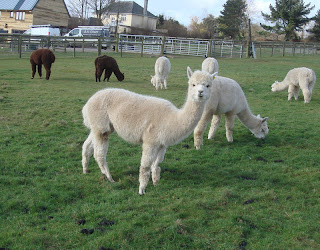 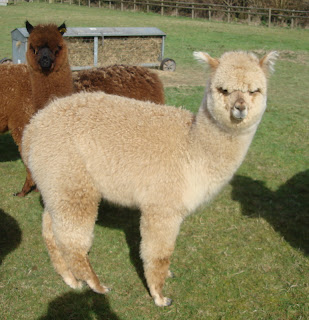 Whilst working out which alpacas to sell this year and which to keep, I had a look at Alario's offspring.   He has sired about 35 cria since we imported him from Chile in 2005 and the photos above are of the ones who are still on the farm.  Sadly we need to move him on now as he is related to too many of the females who need a mate.  He is 10 years old and he has definitely done his bit for Laurel Farm.
Posted by Geraldine at Thursday, March 14, 2013 No comments:

Another group of alpacas had a long overdue toe nail clipping sessions today.  The group consisted of  female weanlings and young adult females as well as Mums of male weanlings who sadly do not live with them anymore.

When the alpacas were in the barn the young males were separate and we took the opportunity to handle them quite a lot.  Because the females were all in together we did not handle the youngsters so much and it really showed today.   The boys had been easy but the 2012 females were much less comfortable with having their nails done.   Awake up call for us to make sure they are easy to handle as adults.

We took the opportunity to check their condition and were encouraged that most of the ones we treated today had improved with only one or two of any real concern now.  Most of the females weanlings are in good condition with really lovely fleece.

Apart from testing the system  the plumbers have finished their work in the house and it is now just waiting for the electrician and  a few tidying up jobs from the main builders.
Posted by Geraldine at Wednesday, March 13, 2013 No comments:

Despite the really horrible weather, we feel we are making some progress.   The house is coming on really well and visitors are starting to pass favorable comments about the living room.   The kitchen has been fitted and we have actually finished the porch.  The plumber and electrician are coming this week to carry out the second fix i.e. putting in the things that actually show like lights, radiators etc:

We have started cutting toe nails in  batches.  Today we  did the male weanlings and, of course, checked their condition at the same time.   We were relieved to find that at last they are putting on some weight, although not quite up to our usual expectations this time of year.

Despite the snow and gales we still have to go round making sure all the  animals have food and water. Most of them do not seem to notice the bad conditions, but I did open the curtains this morning to the sight of several groups of alpacas lying around with a dusting of snow over them.  Even though they all have shelters they do not seem to have the sense to go into them much.

The other fun job in the mornings is breaking the ice in the water troughs. This morning it was quite thick and took some cracking.  Alpacas do not generally drink a lot and are expert at extracting and using moisture from forage. 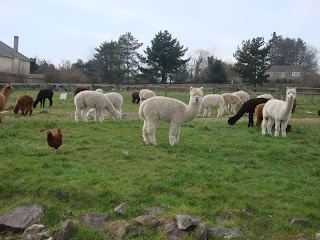 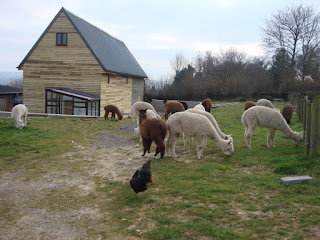 We thought some of the alpacas could do with some lawn mowing experience as it is the weekend and the gates are closed.  I opened the gate of their paddock and they galloped up to the grassy bank next to the house.   Mike reckons they have been eyeing it up.  Of course some of the chickens needed to investigate too.

These are all quite young female alpacas and we are hoping that with some good matings this year they will form the basis of our future herd.   As usual we will be selling off some, if not all of the older generations to make way for our ever improving stock.

Despite being closed most of the time and all the time as far as the shop is concerned because of the building work, we are still getting quite a few customers phoning and calling in to see and buy our wool, socks and jumpers etc: which is encouraging.   We have also been booked for  five village fetes etc:  where we take some young alpacas for sale as well as all our alpaca products.  Usually we do very well at these events.