Dolly  usually herds the alpacas when we need them moved around but one of her other duties is helping to put the chickens away at night.

In the summer we do this at tea time before we go indoors for the evening and Dolly is very useful as the hens do not believe it is bed time.   She herds them into their pen and they can still wander around and feed until dusk when they go indoors and the automatic pop hole shuts them in safely for the night.

As the days get shorter the hens go to roost without Dolly's help and just need a quick check to make sure they are all in.   Yesterday I left it a bit late and it was very nearly dark when I went to do my rounds.  All the hens appeared to be roosting but a count revealed that one was missing.  I scouted round but it was getting darker by the minute so I went back to the house and brought Dolly out.   She ran up and down and under parked trailers, along the hedge row without any results and just as I was about to give up and just cross my fingers that the missing hen was in a safe place and would avoid becoming the fox's dinner,  Dolly ran to an old freezer which has been abandoned temporarily against the hen house wall.  She sniffed both ends and then lay down pointing towards it.

I peered over the top but could see nothing.  I shone the torch along the very slim gap behind the freezer and could just about see some feathers.   By this time Mike was already coming down to see if he could help and he held the freezer out whilst I reached in and grabbed the hen.   She was carried, protesting loudly, into the hen house and I deposited her on the perch with the others. 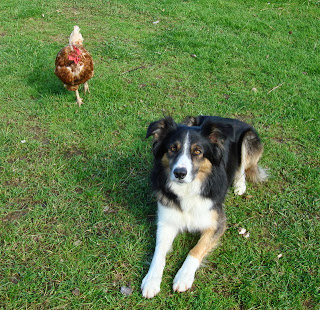