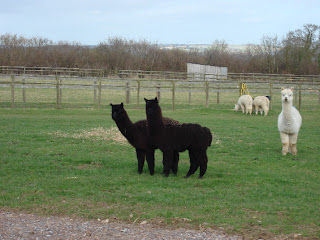 Here it is in black and white!! I am not the first to notice that alpacas seem to be attracted to others of the same or similar colour.  I am sure there must be a reason and maybe it occurs in all species where there is diversity of colour.

We have had to take some fences down to facilitate the ins and outs connected to the new barn and of course the unfenced paddock is the one with the best grass so we decided to take a chance and separate the male and female weanling and put the males in with the adult males, so effectively we now have a "batchelor" herd - i.e. all the  males (except Alario, who seems to have teamed up with two young bucks who keep escaping from their paddock and into Alario's), and all the females who are still in the winter paddocks.

I herded the weanlings to the top of the race where they had been for the past couple of weeks and put the two females on halters.  Mike opened the gate and the boys mooched into the unfenced paddock where the adult males were grazing.   So far all is going well.   This is as we hoped because it was a new paddock for all them, so no territorial issues, and the weanlings are still quite young and unlikely to challenge the adults. We have put a sign on the gate as they are now free ranging in the paddock and the yard and the drive. 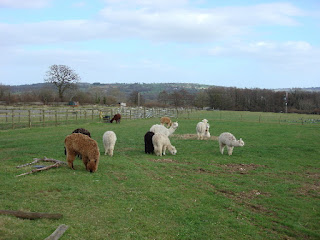 I walked the two girls down to the winter paddocks.  They were reluctant at first but soon cheered up when they caught sight of the rest of  the herd.  The photo is of the adult males and weanlings.

The builders who are supposed to be concreting the new barn failed to turn up this week and Mike has been unable to contact the boss, which is a bit worrying as he is usually quite good at returning calls and although difficult to pin him down to a time, he always sticks to his agreement.   We are worried that he might have had an accident or be ill. 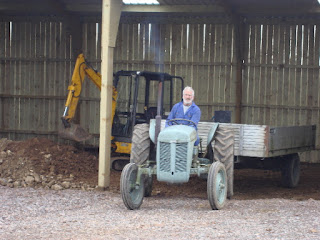 Mike shifted most of a pile of soil which had been left in the door way, but cannot do much else to move the job on as it is quite major work.

I went up to check on the goats this morning at about 5.45a.m. and found another kid had arrived.   He was tucked down in the crevace between the door and the main part of the goathouse but was fine and I made sure that he was suckling before leaving him with his Mum.  I am checking every hour or so during the day and as the sun came out and the wind dropped we let the kids and their Mums out to get some exercise and fresh air.   We had to keep the one with the adopted twin in the stock box we have made their temporary home as she needs more time to bond with the imposter before she goes back with the rest of the herd.

We now have 4 buck kids with two more does looking fit to bust.
Posted by Geraldine at Thursday, March 08, 2012